Breast cancer affects 1 in every 8 women in the United States and is currently the most prevalent cancer worldwide. Precise staging at diagnosis and prognosis are essential for patients. We now have an additional analyte, Oncosomes, that can aid us in the diagnostics workup: https://rdcu.be/cWsuP
Peter Kuhn
Professor, USC
Follow
Like Liked by Evelina Satkevic and 1 other
0

Cancer in any form is most successfully treated if it is caught in the earliest stage, but when it comes to some cancers, this is no easy task. Patients and their doctors may not recognize the signs of illness early enough or even get regular screenings. And some of the standard screening tools for confirming a cancer diagnosis are imperfect and invasive.

A national team of researchers led by University of Southern California scientists think they are on to something less invasive that has the potential to identify more than one cancer.

They’ve been testing a potentially less invasive tool that requires only a simple blood draw: a high-definition liquid biopsy. The work previously had demonstrated this potential diagnostic can identify early signs of bladder cancer.

The study involved 100 breast cancer patients — some early and late stage — and 40 patients without breast cancer from April 2013 through January 2017. The work was conducted at clinical sites — the Norris Comprehensive Cancer Center at Keck Medicine of USC, the Billings Clinic in Montana, Duke University Cancer Institute, Durham, North Carolina, and the City of Hope Comprehensive Cancer Center in Duarte, Calif.

Led by the USC Michelson Convergent Science Institute in Cancer (CSI-Cancer), the scientists were testing a theory that the high-definition liquid biopsy could detect multiple cancer biomarkers, including the membraned cargo carriers that potentially enrich the body’s environment for cancer growth. These “oncosomes,” as they are known scientifically, are secreted by cancer cells, which research has shown previously.

Director of CSI-Cancer, Peter Kuhn, says the oncosomes are about 5-10 microns in diameter. “About the size of a cell,” he says. “We first identified these large vesicles in prostate cancer about a year-and-a-half ago and showed that they are related to the cancer. They are hiding in plain sight.”

If further studies produce similar results, this could mean that the next generation high-definition liquid biopsy may become a diagnostic tool for early breast cancer detection and other cancers, he said. The test also could inform patients who have been treated for cancer that they will most likely remain cancer-free.

“Typically, I’m the bearer of bad news. I say, ‘You have cancer in your blood,” Kuhn said. “But a test like this could give hope that if there is a sign of cancer, we can find it very early and improve treatment, our confidence in the success of the treatment, and directly impact survival.” 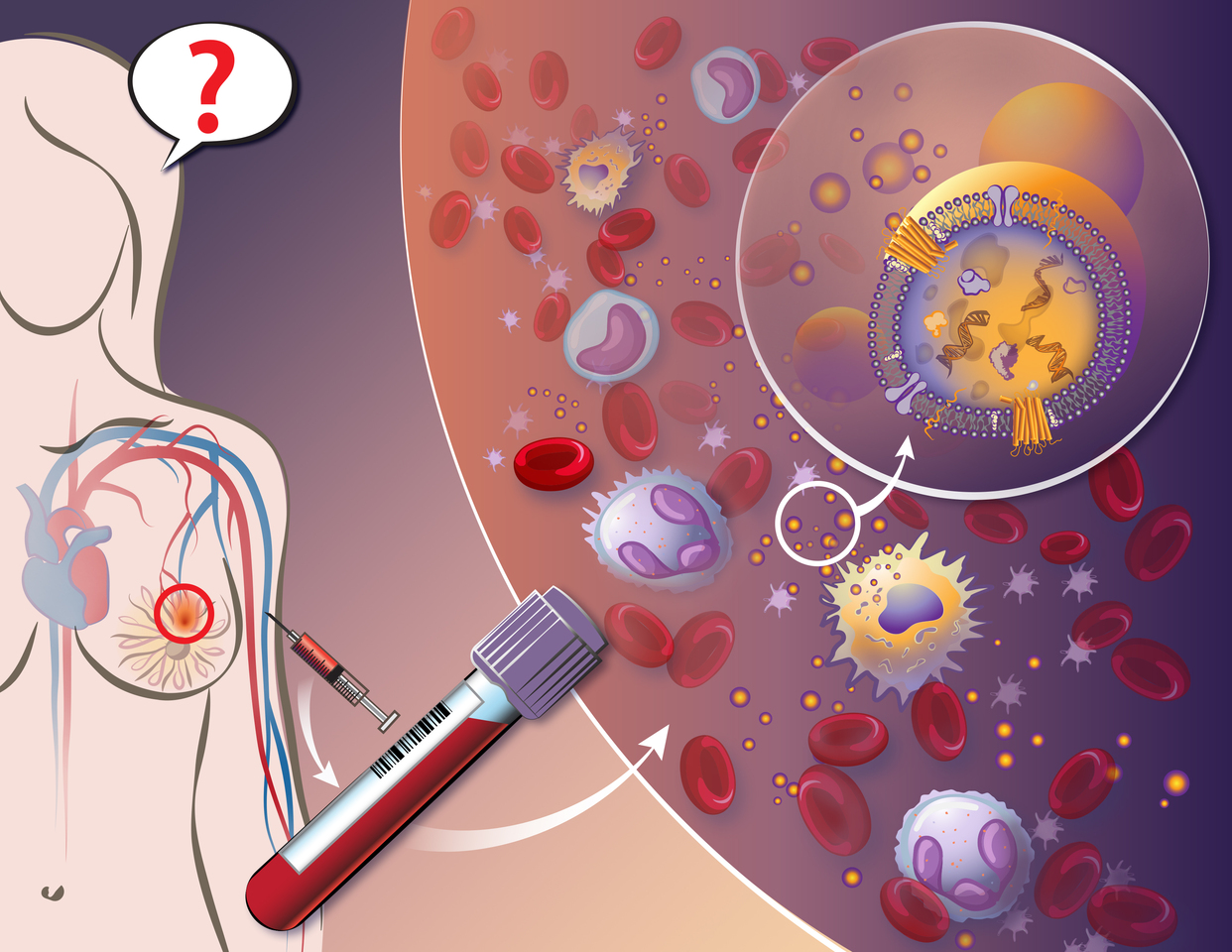 Breast cancer affects 1 in every 8 women in the United States and is currently the most prevalent cancer worldwide. Precise staging at diagnosis and prognosis are essential for patients. We now have an additional analyte, Oncosomes, that can aid us in the diagnostics workup: https://rdcu.be/cWsuP