Spurr et al. identify high pretreatment aneuploidy score as a potential biomarker in patients with NSCLC who benefit from concurrent radiation and immune checkpoint inhibition, in immunogenomic analysis of data from a phase I clinical trial.

Over 500 clinical trials combining radiation and immunotherapy have been initiated based on the hypothesis that radiation induces favorable immunomodulatory effects which can improve the efficacy of immune checkpoint blockade. Inspiration for these trials comes in part from numerous pre-clinical studies indicating that local tumor irradiation is immunogenic1–5. However, dozens of recent clinical trials have not found a benefit with this combinatorial approach in various cancer types6. The discrepancy between pre-clinical and clinical studies raises questions about whether a synergy truly exists between radiation therapy and immunotherapy. However, an alternative explanation is that while there is a beneficial interaction, only a specific subset of patients derive benefit from this synergy, thereby negatively confounding the results of clinical trials.

To address these important questions, we analyzed a unique cohort of patients with metastatic non-small cell lung cancer (NSCLC) who received either concurrent or sequential radiation and immunotherapy on the randomized phase I COSINR trial (NCT03223155). For all patients, tumor biopsies were collected both pre-treatment and on-treatment of the same irradiated metastasis; however, in patients treated on the sequential arm, the on-treatment tumor biopsy was obtained after completion of radiotherapy, but prior to administration of immunotherapy, whereas on the concurrent arm, the on-treatment biopsy was obtained after administration of both radiation and immunotherapy. RNA and whole exome sequencing were performed on each of these biopsies.

By analyzing differences in the matched tumor biopsies, we investigated the impact of adding immunotherapy to radiation on the tumor microenvironment. For the first time in patients, we determined that local tumor irradiation alone was not immunogenic. Radiation downregulated key pathways involved in anti-tumor immunity including effector CD8+ T cell signaling through interferon gamma, antigen presentation, and the inflammatory response. These results were corroborated by multiplexed immunofluorescence showing a reduction of intratumoral CD8+ T cell density. By contrast, the addition of immunotherapy to radiotherapy rescued the apparent immunosuppressive phenotype induced by radiation, resulting in an influx of new T cell populations and upregulation of interferon, inflammatory, and cytokine signaling.

This apparent local immune suppression contradicted numerous pre-clinical models that indicated an immunogenic effect of radiotherapy and questioned the underlying foundation on which numerous clinical trials were built. Also, these findings suggested that preclinical models are not a reliable representation of radiation and immunotherapy interaction in humans.

By contrast, the upregulation of immune signaling following concurrent radiation and immunotherapy suggested that there may indeed be a synergy between the two modalities. Thus, we explored whether biomarkers of immunotherapy response could identify subsets of patients which benefit from combination therapy. Notably, established biomarkers of immunotherapy response, including tumor mutational burden (TMB), PD-L1 expression, neoantigen burden, and immune gene expression profiles showed no prognostic value in this setting. We therefore turned our attention to other potential biomarkers.

Recent studies have suggested that genomically unstable tumors exhibiting aneuploidy were less responsive to immunotherapy, potentially secondary to immune evasion. We examined the utility of an aneuploidy score (defined in our study as the fraction of chromosomal arms exhibiting copy number gain or loss) as a novel biomarker of our combinatorial treatment paradigm. We found that concurrent radiation and immunotherapy was more effective at eliminating tumor cells and resulted in improved survival as compared to sequential administration among patients with highly aneuploid, but not less aneuploid, NSCLC. In other words, while no difference in outcomes was observed between the two trial arms across all patients, striking differences were noted when patients were stratified by baseline tumor aneuploidy. This finding supported the hypothesis that indeed there is a beneficial interaction between radiation and immunotherapy but only among a specific subset of patients.

While our study does not establish the mechanism of immune suppression by aneuploidy in NSCLC, previous studies have demonstrated that highly aneuploid tumors manifest a more aggressive, immunologically cold phenotype. It is possible that the benefit of adding radiation to immunotherapy in highly aneuploid tumors is driven in part by attenuating aneuploidy-induced immune suppression and poor neoantigen presentation in the setting of genomic instability. Immunotherapy may counteract the immunosuppressive effects by improving antigen presentation and recruiting novel CD8+ T cells; simultaneously, radiotherapy-induced cell death could create damage-associated molecular patterns that can then be recognized by the novel T cells. While there appears to be a beneficial interaction to the administration of radiation in addition to immunotherapy among highly aneuploid tumors, administration of immunotherapy after radiotherapy as opposed to simultaneously may limit these beneficial interactions, indicating that the timing and sequencing of these therapies is of critical importance in maximizing the synergy between radiation and immunotherapy. 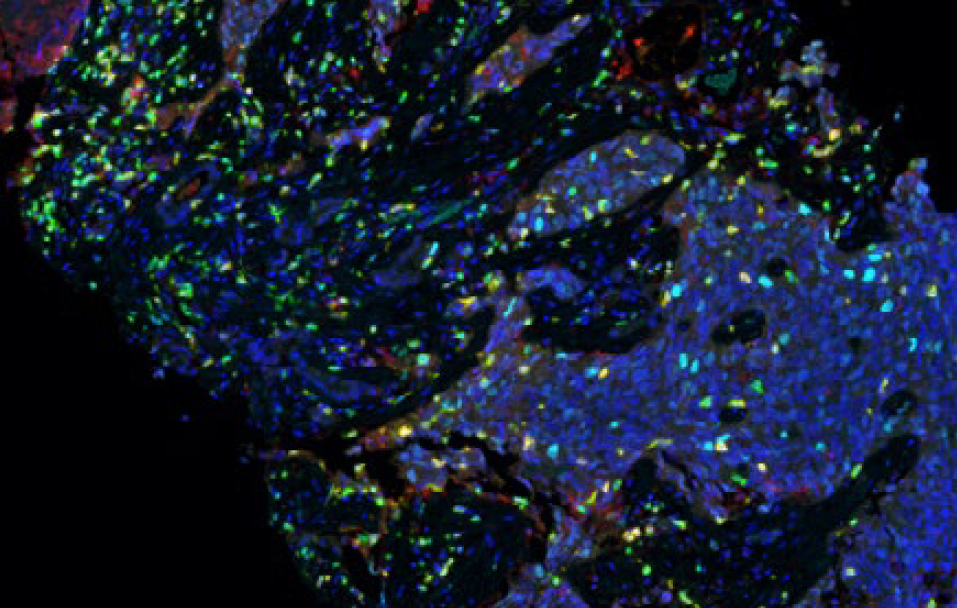