To better understand the molecular difference between the sensitive and resistant lines, we performed a bioinformatic clustering analysis of a public cancer cell line database that provides mRNA profiles for multiple liver cancer cell lines. We assessed the expression patterns of genes that might be involved in the sensitivity to MCR. Since these cell lines are derived from liver tumors, we evaluated the epithelial-mesenchymal transition (EMT) markers indicative of tumor progression and drug resistance, and liver-specific markers including HNF4α, the master regulator of liver functions and known to suppress EMT. Key enzymes for methionine metabolism, broadly sulfur amino acid (SAA) metabolism were also included for evaluation, because these enzymes are reported downregulated in liver tumors, and dysregulation of these enzymes might play a part in the differential response to MCR.

Given the positive correlation of SAA enzymes and HNF4α, a transcription factor that regulates numerous hepatic genes, we hypothesized a transcriptional link between the two. Indeed, these enzymes all possess multiple HNF4α-binding sites, which was confirmed by our ChIP and luciferase reporter experiments. 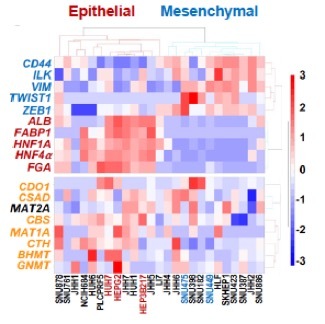