Angiomatoid Fibrous Histiocytoma (AFH) and Clear Cell Sarcoma (CCS) are rare forms of sarcomas of mesenchymal and neuroectodermal origin, respectively, affecting primarily adolescents and young adults and characterized by the expression of the oncogenic fusions EWSR1-CREB1 and EWSR1-ATF1 [1, 2]. These fusions are often the only aberration in these tumors with the EWSR1-CREB1 translocation found prevalently in AFH cases and the EWSR1-ATF1 in CCS even if those entities are characterized by a certain degree of promiscuity.

Because the rarity and the lack of in vivo and in vitro models, these tumors are still understudied and there is an unmet need to develop new therapies to improve survival. Because of our expertise in fusion discovery and in CRISPR-Cas9 mediated modeling of cancer-relevant chromosomal translocations, we generated isogenic cell lines expressing the fusion isoforms identified in AFH and CCS to study their tumor biology. Rather than ectopically expressing the fusion transcript, we have adapted a strategy previously designed for the EWSR1-WT1 translocation [3]. Our design presents two main advantages: 1) the fusion can be induced in a timely dependent manner rather than being constitutively expressed, 2) fusion expression is under the control of the promoter of the endogenous gene (EWSR1 gene) [3]. A crucial aspect that needs to be considered in generating tumor models is the choice of the cell line. It is generally accepted that most sarcomas [4], originate from mesenchymal cells. However, the use of non-immortalized mesenchymal cells to model chromosomal translocations is hindered by their limited capacity to be passaged precluding any further investigation on the effects of the oncogenic fusion. To overcome this limitation, we used a different approach, taking advantage of the pluripotency ability of human embryonic stem (hES) cells. We first isolated and characterized clones harboring the EWSR1-CREB1 and EWSR1-ATF1 translocations in hES cells and then we differentiated them to mesenchymal precursor, one potential cell of origin. We verified that the expression of the fusions induces the core gene signature of, respectively, AFH and gastrointestinal-type CCS in both cell types. Nevertheless, while the viability of hES cells is severely affected starting ~7 days after fusion expression, mesenchymal cells can live up to ~30 days after induction of the fusion and even more, at least in the case of the EWSR1-CREB1 fusion, after the deletion of the tumor suppressor TP53.
Our work demonstrates the feasibility of this approach to generate faithful in vitro models for sarcoma, underline the importance of cellular context in the development of models to study tumorigenesis  and opens new avenues to study these orphan tumors and develop targeted therapeutic strategies. 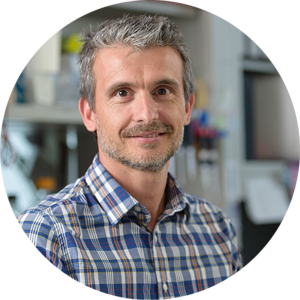