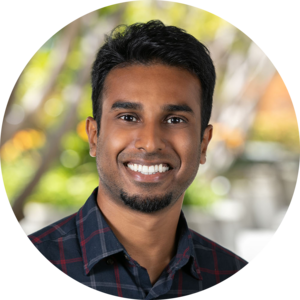 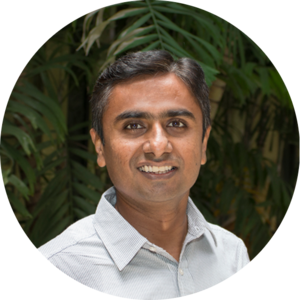 Gall bladder cancer (GBC) is an aggressive gastrointestinal malignancy with a poor prognosis. It is the 20th most common type of cancer worldwide and its incidence is particularly high in specific regions of the world including Bolivia, Chile, Ecuador, Peru, Korea, Japan and India and is currently rising in Western populations (https://bit.ly/3kSLDMw) (Figure 1). In the United States, it is a more common malignancy in Southwestern Native Americans and Mexican Americans. There is also a gender disparity with GBC more prevalent in females than males. The median survival of patients with GBC is typically <1 year. This is mainly due to the fact that it is a difficult to diagnose in the early stages and most patients are asymptomatic until the disease reaches an advanced or metastatic stage. Furthermore, the anatomical location of the gallbladder under the liver makes it easier for GBC to grow undetected. Radical surgery, chemo and radiation therapy remain the current mainstay for treating GBC. However, only about 10-15% patients are amenable to surgery and the 5-year overall survival rate of less than 5%. Currently, it's not clear what causes gallbladder cancer. Likely causative factors include gallstones, female hormone estrogen, life style, food and feeding habits, etc. 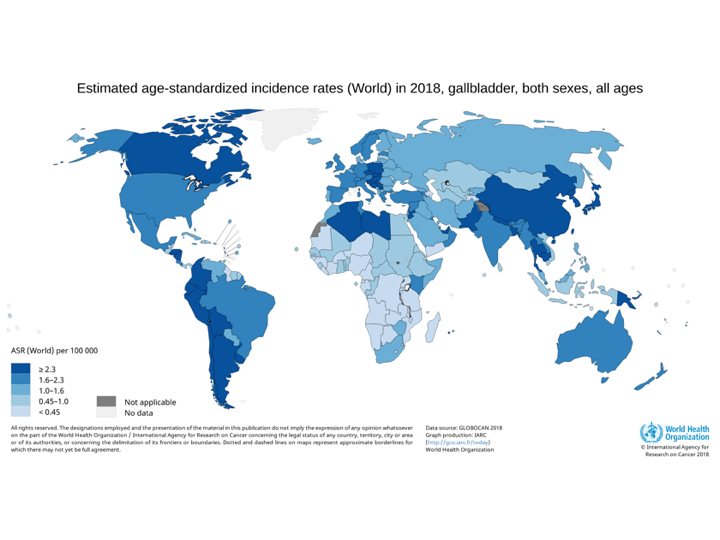 While most cancer genome sequencing studies to date have focused on highly prevalent cancers, few large-scale studies have been performed on rarer forms of cancer such as GBC. Thus, we decided to focus on GBC and created a global consortium involving researchers from India, USA, Korea and Chile. This collaborative effort allowed us to obtain 167 GBC primary samples as well as 39 non-GBC samples and the corresponding matched normal tissue. This unprecedented dataset enabled us to map genomic alterations frequently observed in GBC and to determine if there were differences among tumors from different geographic regions. In our study published in Nature Communications, we performed exome, whole genome and transcriptome sequencing of GBCs from these ethno-geographically diverse populations and identified several significantly mutated genes that were not previously linked to GBC. This included ELF3, a frequently mutated gene in GBC with genomic alterations in 21% of the sequenced tumors. We  integrated somatic mutation, copy number variation and gene fusion data to identify affected pathways in GBC. TP53/RB1 pathway was most commonly altered in GBC. We also found WNT pathway and KEAP1/NFE2L2 pathway activation in GBC. WNT pathway activation was primarily driven through activating mutations in CTNNB1 and RSPO3 fusion. We observed frequent inactivating mutations in SWI/SNF pathway genes including SMARCA4, ARID1A and ARID2. We also found several therapeutically actionable mutations in RAS/PI3K pathway involving frequent alterations in ERBB2. ERBB3, BRAF and PIK3CA.

The advent of immunotherapy has revolutionized cancer treatment with significant survival benefits observed in various cancers including melanoma and lung cancer. In order to determine potential opportunities for immunotherapy in GBC, we evaluated neoantigens arising from somatic mutations. We predicted high-affinity MHC class I binding neoantigen peptides for each tumor. This resulted in the identification of roughly 15 neoantigens per tumor. Most predicted neoantigens were derived from frequently mutated genes in GBC which included TP53, ELF3, CTNNB1, ERBB2, ARID1A and CDKN2A. Using peripheral blood mononuclear cells (PBMCs) from HLA-matched healthy donors, we were able determine the ability of mutant peptides to activate T-cells. Three mutant ELF3 peptides, two mutant ERBB2 peptides and one mutant TP53 peptide were indeed found to activate T-cells and can be used as potential cancer vaccines. We also identified several actionable targets in GBC based on comprehensive characterization of genomic alterations. Up to 20% of all tumors in our study were found to have actionable targets based on available approved targeted therapies (OncoKB). We also identified neoantigens that can be pursued for developing immunotherapy strategies to treat gall bladder cancers (Figure 2). 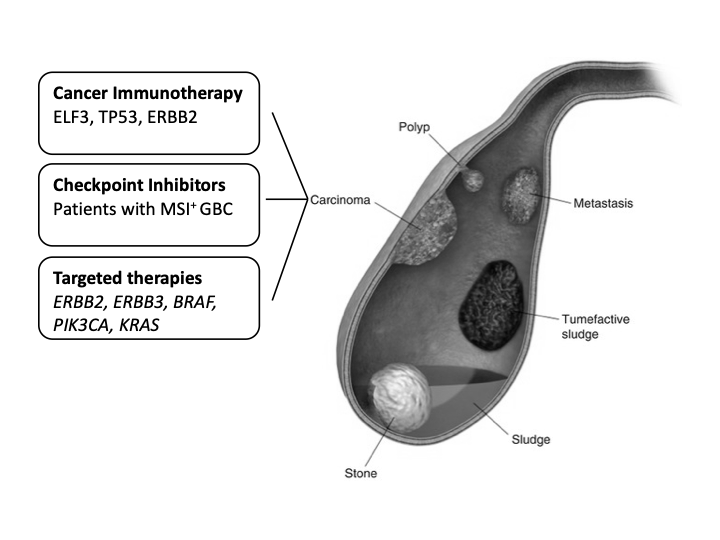 By studying a diverse set of GBC samples across geographically diverse populations, our study has identified novel and potential cancer vaccine candidate genes for treating GBC. This is an important milestone in the ongoing global effort for finding biomarkers of translational significance. By selecting ethnically (and genetically) diverse population groups, this study further underscores the importance and need for incorporating genomic data analysis to identify candidate marker genes for diagnostic as well as therapeutic applications. This will result in better patient outcomes in the clinic through use of approved targeted therapies.