An engineered version of IL-18 that is resistant to binding by the soluble decoy receptor IL-18BP shows strong anti-tumour activity in mouse models of cancer.

As the first FDA-approved cancer immunotherapy drugs, including IFNα (1986) and IL-2 (1992), cytokine therapies established that the immune system could be a powerful ally in the fight against cancer1-3. Cytokines are small proteins that have a big impact on the immune system, acting with hormone-like activities to control nearly all aspects of immune cell physiology4. Yet their therapeutic potential has not lived up to their promise due to their pleiotropic biology, which can lead to substantial toxicities and limited efficacy. Our lab and others have set out to overcome those obstacles by using directed evolution to purposely engineer a new generation of designer cytokines that can precisely target and activate crucial populations of immune cells in various disease settings5,6.

In order to identify cytokines pathways that could be targeted for anti-tumor immunity, we reasoned that cytokines that act preferentially on tumor infiltration lymphocytes (TILs) would have a more favorable therapeutic index than those with broad immunostimulatory profiles. By analyzing single-cell and bulk RNA sequencing datasets from murine and human tumors7, we found that interleukin-18 (IL-18) and its receptors (IL-18Ra/Rb) were markedly associated with anti-tumor effector immune cells such as tumor-antigen specific CD8 T cells and natural killer (NK) cells. This suggested that administration of recombinant IL-18 could represent an effective immunotherapeutic strategy. We were thus intrigued to discover that IL-18 had been previously evaluated in clinical trials of cancer patients—particularly in melanoma—where it was found to be well tolerated, but entirely ineffective8. This was surprising to us, since melanoma is an immunogenic tumor type and the patients treated with recombinant IL-18 were naïve to immunotherapy; it seemed IL-18 should have worked. We thus set out to try to understand why it failed.

One potential explanation was immediately apparent in examining the pharmacodynamic data from the IL-18 clinical trials: administration of IL-18 results in a >100-fold increase in serum concentrations of a protein called IL-18 binding protein (IL-18BP). IL-18BP is an ultra-high affinity (KD=1.1pM) secreted decoy receptor of IL-189 and is regulated in a negative feedback loop that is downstream of IFN-g, similar to the regulation of other immune checkpoints like PD-L1. When we looked in both human and mouse tumors, we found that IL-18BP expression was even higher in the tumor microenvironment. Therefore, we hypothesized that IL-18BP is akin to a “secreted immune checkpoint” that attenuates the activity of IL-18 and set out to create version of IL-18 that would not be affected by IL-18BP in the tumor.

This was a difficult engineering challenge because IL-18BP and IL-18Ra bind a highly overlapping interface on IL-18. Furthermore, IL-18BP binds IL-18 over 10,000 times stronger than IL-18Ra. Our solution to this problem was evolution: using directed evolution with yeast-surface display, we screened over 250 million IL-18 variants to obtain “decoy-resistant” IL-18 (DR-18), a variant of IL-18 that maintains signaling potential but is impervious to binding and inhibition by IL-18BP (Figure above). We found that in multiple syngeneic mouse tumor models, that DR-18 showed robust single-agent activity and also synergized with anti-PD-1 as a combination regimen. This was in contrast to WT IL-18, which—similar to the experience of IL-18 in clinical trials—was ineffective by itself or in combination with anti-PD-1 treatment. We also found that DR-18 induced anti-tumor immunity against tumors that were resistant to canonical immune checkpoint blockade (anti-PD-1 plus anti-CLTA-4) due to loss of MHC class I surface expression, a common resistance mechanism. In these tumors, DR-18 promoted innate anti-tumor immunity by stimulating NK cell activity.

To explore the effect of DR-18 treatment on the tumour immune microenvironment, we employed single-cell RNA-seq profiling, finding that DR-18 remodelled nearly all immune compartments within the tumour, including lymphocytes, macrophages, granulocytes, and fibroblasts. The effects on lymphocytes were most striking, and we found that DR-18 acted on a key population of precursor CD8 T cells that express the transcription factor Tcf1. These precursor T cells have recently been shown to be essential to the activity of checkpoint immunotherapy, particularly because they can give rise to downstream effector T cell lineages that have strong anti-tumour function10-12. We found that DR-18 not only increased the numbers of these “stem-like” T cells, but also that it biased their differentiation toward a highly active, polyfunctional effector phenotype, and away from an exhausted or dysfunctional state characterized by the expression of the transcription factor Tox13-15. This mechanism of action is distinct from other immunotherapeutic agents that are currently being evaluated in the clinic and presents a compelling rationale for therapeutic combination with agents such as anti-PD-1 antibodies.

While our work provides a preclinical rationale for IL-18 receptor agonist therapies in cancer, the key next step will be to test this approach in clinical trials. Given its unique mechanism of action and ability to act on both innate and adaptive immune cells, DR-18 offers several avenues of potential therapeutic use in a wide range of tumour types. Building on the data presented in our paper, it could be combined with immune checkpoint inhibitors to enhance their activity and prevent resistance due to MHC class I loss. IL-18 has also been shown to be synergistic with other classes of therapeutics including enhancing NK cell responses to monoclonal antibodies (antibody directed cell mediated cytotoxicity, ADCC) and engineered cell therapies such as “armoured” CAR T cells16. Given the high expression of the IL-18 receptor on NK cells, DR-18 may show particular utility in combination with biologics that stimulate endogenous NK cells, as well as with engineered CAR-NK cell therapies. Of course, like any immune agonist therapy, it will be essential to carefully assess the safety and potential toxicities of DR-18 therapy. The first studies to address these questions will commence with first-in-patient administration of DR-18 in 2021. 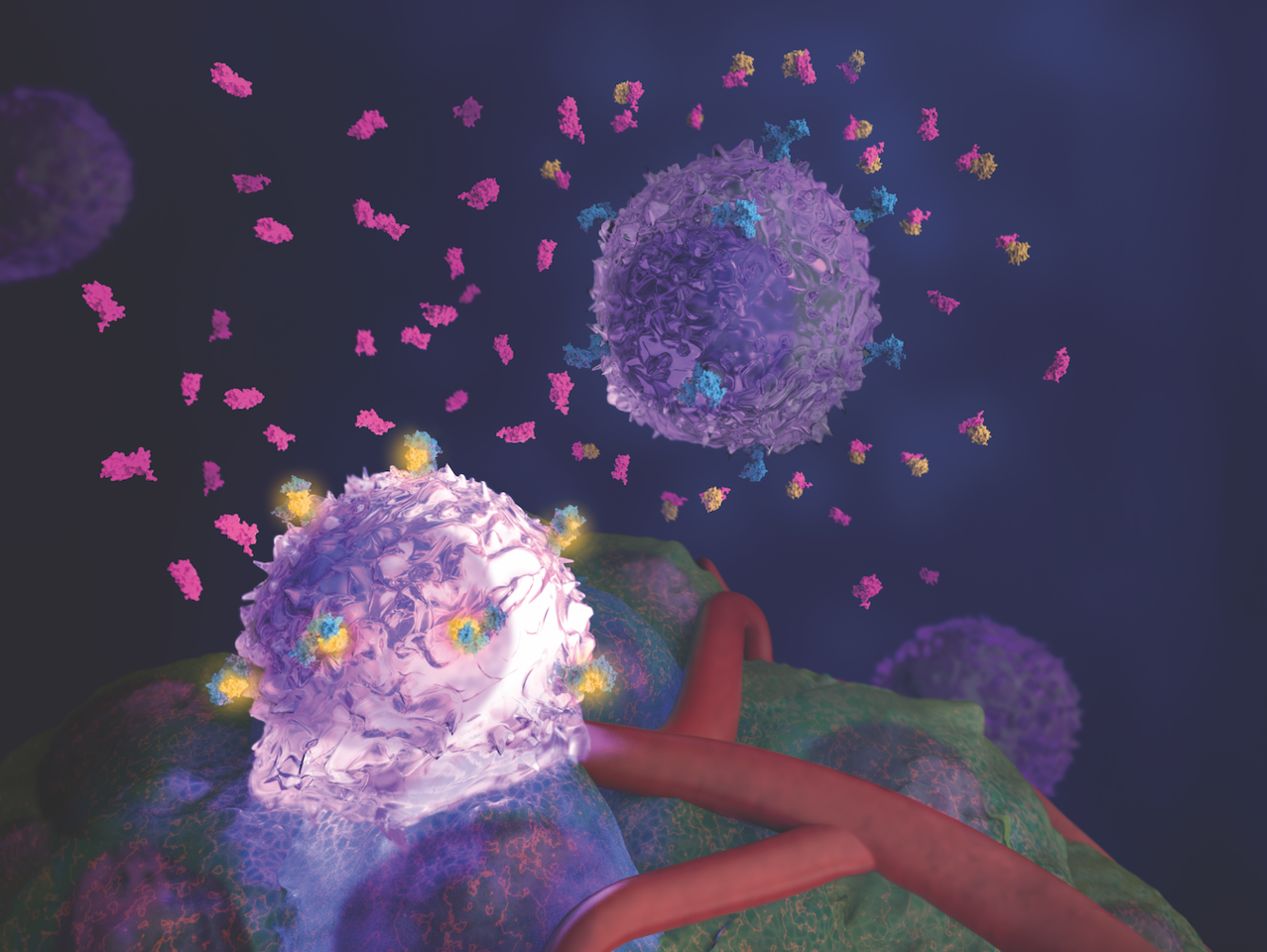