Our work recently published in Nature Communications shows how implantation of human cancer cells in zebrafish is modulated by the innate immune response and cancer immunoediting. Rita Fior and Vanda Póvoa
Rita Fior, Rita Fior & Vanda Povoa
3 contributors
Like Be the first to like this
0

Zebrafish has emerged as an important vertebrate model to study tumor biology and immune response. Here, using a zebrafish xenograft model, the authors show that the engraftment capacity of human colorectal cancer cell lines is influenced by innate immune response and immunoediting.

The process of Cancer immunoediting results from a dynamic battle between tumours and the host immune system. Either the tumor is eradicated by the immune system or it can develop strategies to evade and corrupt the immune system, thereby helping the cancer to thrive in the host. Moreover, tumours are very heterogeneous. They are composed of multiple subclones and “cell states” that can interact differently with the environment. This process supports cancer progression by providing enormous plasticity to adapt and change through a type of “Darwinian selection”.

In this study, we took advantage of the zebrafish larvae xenograft model to investigate the contribution of innate immunity to this process. This assay relies on the injection of fluorescently labelled tumor cells into 2 days post fertilisation (dpf) zebrafish embryos and accessing tumor behaviour or/and response to anti-cancer therapy after 4 days. Zebrafish has all the innate immune “components”, including complement, Toll-like receptors, phagocytic neutrophils, macrophages etc, but adaptive immunity is only fully mature at 2-3 weeks pf. Since the xenograft assay occurs before, this provides an ideal temporal separation to study innate-immune response in vivo.

In fact, this work started with a puzzling observation when we were developing the zebrafish xenograft model in the Lab. Why did some human tumours implant so well in zebrafish while others simply vanished in just 3 days? Sometimes we injected hundreds of fish and ended up with almost nothing 3 days later! One hypothesis could be that human cells were simply dying due to the incubation of xenografts at 34ºC after injection (this was a current criticism of the model from septic researchers…).

Well, I didn’t think this was the case! Because, not only other human tumor cells implanted very well (~100%) but also we found that when we treated these tumours that usually disappear with chemo or radiotherapy, they implanted much more - sometimes more than double compared with untreated samples!?

This paradoxical observation led to a new working hypothesis: since chemo/radiotherapy can have an immunosuppressive effect, maybe the innate immune system is recognising some tumours but others not. In other words, maybe some tumours generate a reactive-HOT tumor microenvironment (TME) that favours rejection, whereas others generate a COLD-suppressive TME that inhibits the clearance process?

We proceeded to test this idea. We focused on pair of colorectal cancer cell lines derived from the same patient, which showed these contrasting behaviours: SW480-derived from the primary tumor that implanted poorly whereas SW620-derived from a lymph node metastasis engrafted very efficiently. We defined these tumours as regressors and progressors respectively, following Schreiber’s nomenclature.

To test if some tumours generate a reactive-HOT TME that allows rejection, while others generate a suppressive-COLD TME - we mixed SW480-regressors with SW620-progressors. We asked: will the progressors be able to protect regressors from being cleared? Or will they simply out-compete the regressors?

Then, Vanda really wanted to understand clonal dynamics in mixed polyclonal tumours and how the proportion of clones could impact in tumor engraftment and modulation of TME. I confess that I thought that this was not priority, and that it would be really hard to obtain a conclusive result. But Vanda insisted, and performed a beautiful dose-response experiment where she incremented the amount of SW620 progressors in the mix. The result was super clear! The data indicated that the presence of progressors in mixed tumours was proportional to engraftment and was able to block the recruitment of neutrophils and macrophages.

Next, I wanted to test whether innate immunoediting was occurring in the zebrafish model. Now it was my turn to perform a crazy experiment that no one thought was possible… I dissected the seven tumours that escaped from a SW480 injection and expanded these cells in vitro (I could barely see the tumours…but because they were GFP+ I was able to detect them). Then, after expansion in vitro, we re-transplanted these SW480-escapers and showed that these tumours engraft more efficiently and have a low macrophage infiltration than the parental tumours!

Finally, the referees asked us for the transcriptomics of the escapers and for this we performed single cell RNAseq experiments that revealed clearance/expansion of specific subclones. Now we have so much to explore! We do not want to give any spoilers, so come and check our paper! 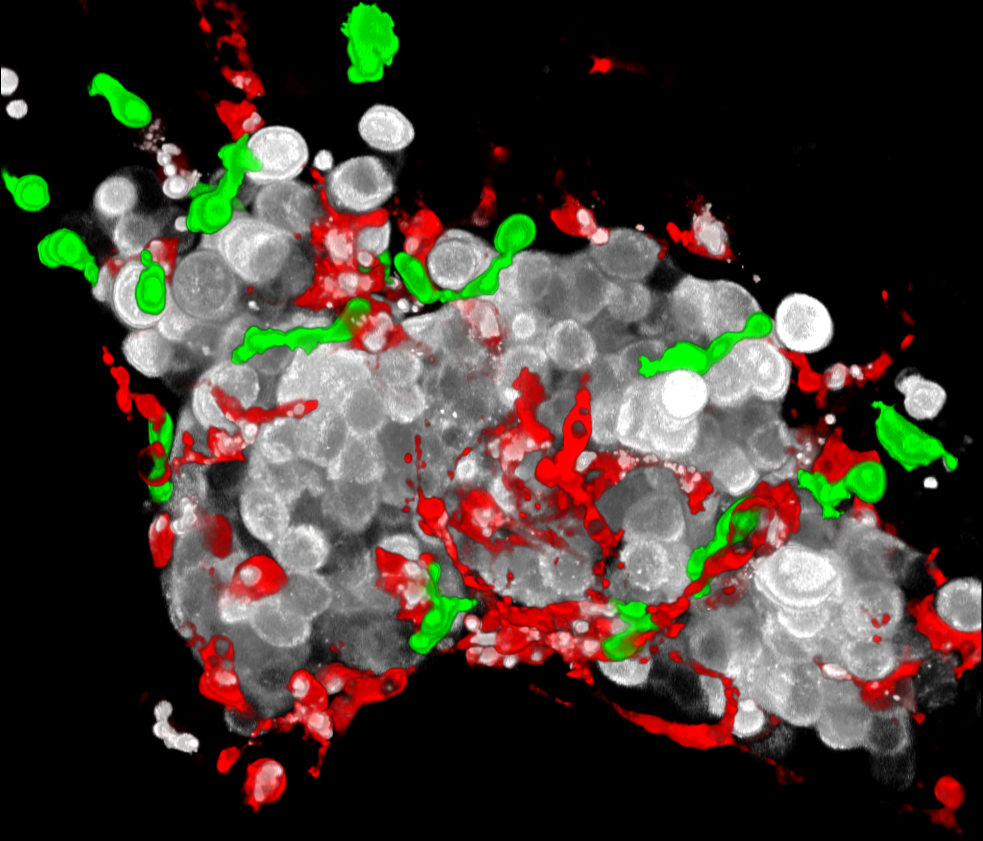 Our work recently published in Nature Communications shows how implantation of human cancer cells in zebrafish is modulated by the innate immune response and cancer immunoediting. Rita Fior and Vanda Póvoa