Kinome-wide analysis of the effect of statins in colorectal cancer

There is an association between statin use and a reduced incidence of colorectal cancer (CRC). In this study we set out to assess the influence of statins on global cancer cell signaling by performing an array-based kinase assay spanning the entire human kinome.
Philip Voorneveld
MD, PhD, Leiden University Medical Center
Follow

Colorectal cancer (CRC) is a major public health problem worldwide. According to the GLOBOCAN 2020 data, CRC is the third most diagnosed cancer with 1.9 million new cases and 935,000 deaths in 2020 (https://gco.iarc.fr/). Despite improvements in treatment, advanced disease remains incurable and hopes to achieve reductions in mortality are pinned on nationwide screening programs aimed at early detection and prevention. Colonoscopy screening is the foundation of CRC prevention, but it does not offer complete protection.

Chemoprevention represents a promising adjuvant strategy. The use of statins in CRC chemoprevention is highly debated. Epidemiological studies and meta-analyses have shown mixed results regarding the effectiveness of statins in reducing CRC incidence.1-5 Statins, however, remain attractive candidates for use in chemoprevention as they are generally well tolerated and have proven beneficial effects on cardiovascular outcomes. Their exact cellular targets and underlying mechanism of action in CRC are largely unknown. We have previously shown that statins act on CRC through activation of the Bone Morphogenetic Protein (BMP) signaling pathway.6,7 We have also shown that statin use is associated with reduced CRC mortality especially in patients whose tumors have intact BMP signaling.8

In this study, we assessed the influence of statins on global cell signaling in a hypothesis-free manner using an array-based kinase-assay. We show that statin treatment leads to widespread changes in kinase activity in cancer cells compatible with anti-tumor activity with most pronounced effects on PI3K/AKT/mTOR signaling. We further confirm these data by a series of in vitro experiments and show that the inhibiting effect of statins on the AKT/mTOR pathway occurs via PTEN in a BMP-dependent manner. Finally, experiments in xenografts and in patients with CRC treated with statins confirm that the changes in the BMP pathway and downregulation of phospho-mTOR seen cell lines in vitro also occur in tumors in vivo.

Genetic changes and the subsequent alterations in signal transduction pathways are key features of carcinogenesis, and new therapeutic strategies targeting these pathways have proved successful in treating CRC, but have to be targeted to cancers with a sensitive molecular profile. This study provides new insights into the working mechanisms of statins which could facilitate their rational, targeted use in CRC. 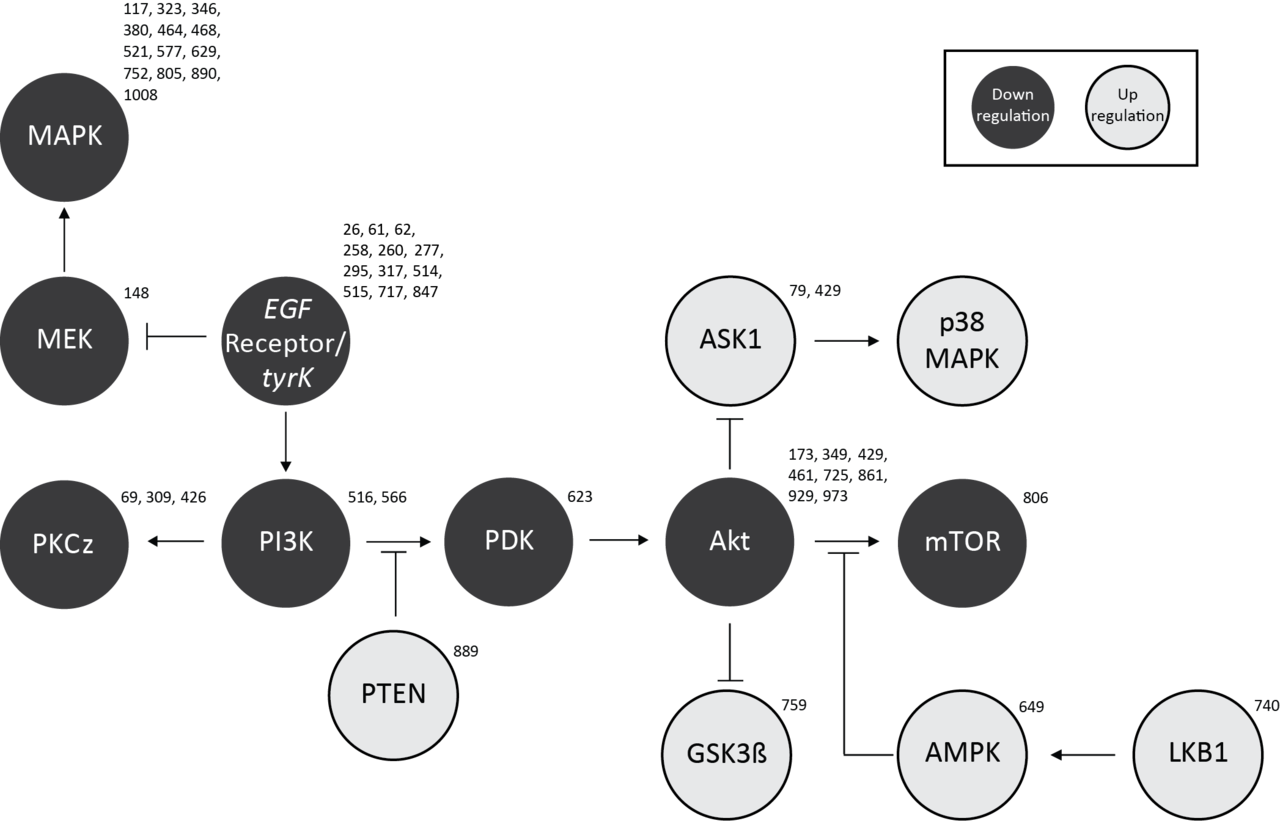 Kinome-wide analysis of the effect of statins in colorectal cancer

There is an association between statin use and a reduced incidence of colorectal cancer (CRC). In this study we set out to assess the influence of statins on global cancer cell signaling by performing an array-based kinase assay spanning the entire human kinome.