Dying cells shed DNA into the blood where it is called circulating tumor DNA (ctDNA). ctDNA fragments harbor molecular alterations that are found in the tumor genome such as gene mutations, copy number variations, and other genomic features, which can be identified using next-generation sequencing (NGS) technologies.

In our study, we extended this ALK+ NSCLC cohort to multiple longitudinal samples and asked whether ctDNA detection using tNGS and sWGS could precede disease progression as identified by computed tomography (CT) imaging. We were able to confirm the presence of the ALK fusion or mutations in 51% (22/43) of patients. We also observed alterations in other cancer-relevant genes including MET, EGFR, KRAS, KIT, and RET. In patients with detectable ALK alterations, we found that the variant allele frequencies (VAFs) of ALK mutation or fusion increased upon disease progression. We observed the opposite trend in samples collected post therapy change, possibly indicating therapy response. Many cases without detectable ALK alterations either had stable disease or intracranial progression, which could explain the low ctDNA amount in the plasma. Most importantly, we were able to identify 21 cases of early molecular progression in 19 (44%) patients. This means, that a significant change in VAF or CNVs was already present prior to a clinically detectable progression. The lead times ranged from 20 to 638 days, with a median of 88 days. The majority of cases with identified lead times were patients with detectable ALK alterations which most likely indicated high ctDNA levels, suggesting that lead time calling is most beneficial for patients with elevated ctDNA levels. Interestingly, lead times correlated with longer therapy durability, which could be relevant in the clinical setting as newer ALK TKIs demonstrate progression-free survival of at least two years.

There are numerous advantages in implementing liquid biopsy approaches for disease monitoring. First and foremost are the minimally invasive blood draws that could supplant tissue rebiopsies that are the current standard for the identification of actionable drug targets (Figure 1). For solid tumors, this approach also minimizes the cumulative radiation exposure from regular CT imaging. Early detection of resistance mutations could prompt clinicians to halt ineffective treatments and facilitate a therapy switch. Nonetheless, the data that we present is not without caveats and limitations. Our study has a retrospective design and involved a limited number of patients. There is also the question of sensitivity and whether a prior screening of samples should be performed to determine which ones are to be processed for tNGS. Ultimately, the ultimate proof of the utility of ctDNA analysis for early detection of disease progression will be the demonstration of a patient survival benefit in prospective clinical studies. 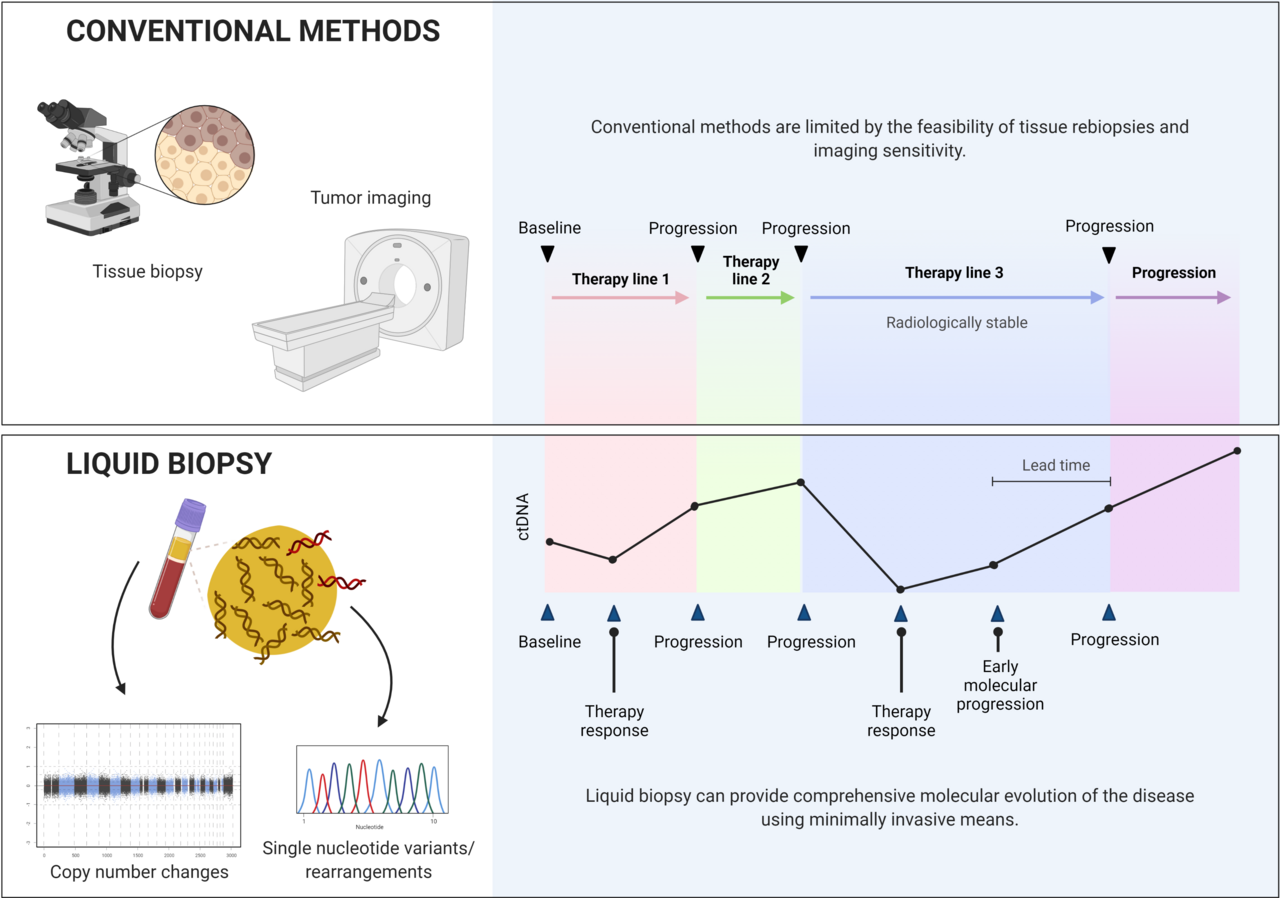