In the last decade multiple well tolerated, effective therapies have been developed for the treatment of Waldenstrom macroglobulinemia (WM).  One of these groundbreaking therapies is ibrutinib, the first Bruton tyrosine kinase (BTK) inhibitor to receive FDA approval for the treatment of WM.  The development of this innovative therapy in WM was aided by the discovery of the MYD88 L265P mutation which is present in approximately 95% of patients with WM and is associated with downstream activation of BTK.1-3  Sensitivity to the BTK inhibition of ibrutinib is linked to the presence of this mutation in the malignant cells of WM.

The original trial demonstrating the safety and efficacy of ibrutinib in patients with WM was published in 2015 by Treon, et al.4  It highlighted the success of this novel therapy in patients with relapsed and refractory WM and demonstrated an overall response rate of 90.5%, with lower response rates in those patients with CXCR4 mutations and those with wild-type MYD88.   With the promising data from this trial an additional study was commenced using ibrutinib in treatment naïve patients with WM.  This study was previously published by Treon, et al in 20185 and has now been updated in a recent publication in Leukemia.6  This original clinical trial included a total of 30 patients and demonstrated the incredible safety profile of ibrutinib, as well as notable hematologic response rates.

Since the publication of these landmark manuscripts ibrutinib has become a mainstay of WM therapy and the frequency of its use has increased rapidly as clinicians move away from more toxic therapies in favor of targeted, well tolerated therapies.  With the increasing use of BTK inhibitors it was clear that an updated manuscript describing the length of response, as well as the cumulative toxicities with ibrutinib was necessary.

Dr. Castillo’s most recent manuscript in Leukemia reports on the outcomes of 30 patients with treatment naïve WM after a median follow-up of 50 months.6  It highlights again the excellent overall response rate of 100% that was seen with ibrutinib monotherapy.  Most patients in the trial (87%), achieved a major response (at least a 50% reduction in IgM level) and the median time to achieving a major response was 1.9 months.  Thirty percent of patients achieved a very good partial response (at least 90% reduction in IgM level) and at 4 years progression free survival was 76%. This novel data highlights the long-term efficacy that is achieved with this therapy in newly diagnosed patients.

Treatment with ibrutinib is generally well-tolerated but treatment-related adverse events have occurred with continued therapy, although most adverse effects were Grade 2. The most common treatment related adverse events were fatigue, infections (including upper and lower respiratory tract infections, urinary infections, and soft tissue infections), hematomas, and atrial fibrillation.  Grade ≥2 atrial fibrillation was reported in 20% of patients on this trial, although these patients were medically managed and continued on ibrutinib.  Overall, treatment with ibrutinib was well tolerated without any new or concerning adverse events identified during long-term follow-up.

Although we are excited about the excellent hematologic responses seen in this study there is an abundance of work remaining in the search for more effective therapies.  This is demonstrated by the lack of complete hematologic responses seen with BTK inhibition, as well as the difference in disease responses when comparing those patients with and without a CXCR4 mutation.  CXCR4 mutations occur in approximately 30-40% of patients with WM and have an impact on clinical presentation, as well as response to therapy, as is clearly demonstrated in this study.7  The time to obtaining a major response in those patients with a CXCR4 mutation was 7.9 months which is significantly longer than the overall time to major response of 1.9 months as mentioned above.  Additionally, of the six patients that progressed during the follow-up of this study five of the patients (83%) had a CXCR4 mutation.  There was also a sixfold increase in the risk of progression or death in patients with a CXCR4 mutation.   The significant differences in the time to response, depth of hematologic response, and risk of progression or death highlight a remaining area of need in the treatment of WM.

Currently ibrutinib plays a crucial role in the therapy of WM, both in newly diagnosed patients and in those with relapsed disease.  We were pleased to report in this most recent publication that ibrutinib remains tolerable and safe even after years of continuous treatment. We believe it will continue to play an important role in the future treatment of WM and we currently have ongoing clinical trials combining ibrutinib with additional agents, in hopes of finding a treatment regimen that is well tolerated and leads to deeper and more durable hematologic responses, even in those patients with CXCR4 mutations. 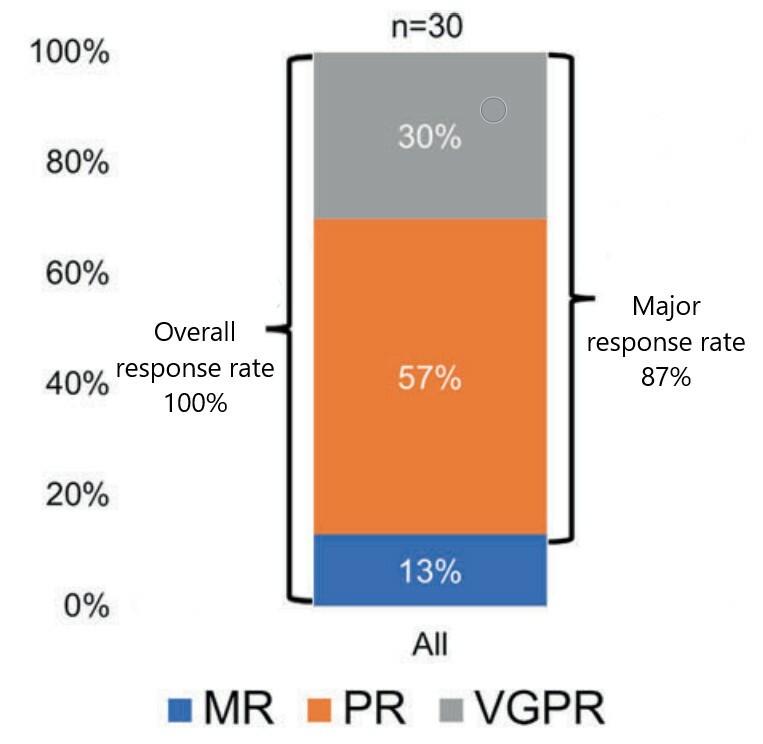