Lung cancer is one of the most challenging cancers because of its wide-spread recurrence and the high mortality rate. In 2020 alone, nearly 1.8 million lung cancer patients lost their lives worldwide, earning lung cancer the leading cause among all cancer-related deaths [1]. The lung cancer is highly heterogenous with many subtypes and associated risk factors. The primary classification of lung tumors relies on histological examination that defines two major groups: small cell lung cancer (SCLC) and non-small cell lung cancer (NSCLC). While the former group occurs exclusively within smokers, the latter group is the most prevalent among all patients, including non-smokers. Further classifications identified lung adenocarcinoma (LUAD) as the most common subtype of NSCLC. Of note, platinum-based chemotherapeutics represent a favorable option in specific clinical regimens, especially for patients diagnosed with SCLC or some uncommon mutations [2]. Current clinical practices implicate recurrent mutations profiling of LUAD tumors for a better-personalized therapy. In this context, LUAD patients gain significant survival benefits from tyrosine kinase inhibitors (TKIs) and immunotherapy. However, the patients' response to such therapies varies considerably, due to acquired systemic resistance. Thus there is ultimate necessity for novel therapeutic options for hard-to-treat cancers, which ignited the race to discover new actionable targets residing within the dark matter of the genome, particularly long noncoding RNAs (lncRNAs).

For more than a decade, our lab has been focusing on elucidating the mechanistic and functional aspects of lncRNAs in normal and pathological contexts. In the past few years, we characterized two lncRNAs NBAT1 and SCAT7, with opposing tumor-suppressing and oncogenic functions in neuroblastoma and lung cancer, respectively [3, 4]. So, we sought to pursue mining the untouchable treasures hidden in lncRNAs to unveil their potential in prognostic and therapeutic applications for LUAD. We realized that our next challenge starts with mining the cancer genome atlas (TCGA) datasets to find a plausible target with undetectable or minimal expression in normal tissues but with significantly higher expression levels in tumors. Following several filtration steps, we chose to focus on LY6K-AS lncRNA, whose higher expression levels in tumors predicted poor clinical outcomes among LUAD patients. We were also astonished to see that LY6K-AS levels go down in senescent fibroblasts while its levels go up gradually across pathological stages of another type of NSCLC known as lung squamous cell carcinoma (LUSC).

To understand the functions of LY6K-AS, we utilized the RNA-seq technology in LUAD cells depleted of the lncRNA. To our surprise, the elimination of LY6K-AS interferes with the mitotic machinery of the proliferating cells, leading to unequal distribution of chromosomes in the daughter cells. This chromosomal imbalance activates an immune response, leading to cell cycle arrest at the G1 phase and proliferation inhibition. We also observed a global alteration in the active histone mark H3K4me3, which demarcates the active status of transcribed genes. As a molecular mode-of-action, LY6K-AS forms a complex with members of the 14-3-3 family of proteins to activate the transcription of several genes involved in the mitotic division.

Over the course of one year, we generated cisplatin-resistant LUAD cells that do not respond to elevated cisplatin treatment doses. Such resistant cells were extremely invasive and proliferative; however, they were highly susceptible to LY6K-AS silencing. Therefore, we decided to take one step forward and test the effect of LY6K-AS depletion in experimental xenograft models. For doing so, we engrafted naïve and resistant LUAD cells separately into immunocompromised mice, followed by localized administration of LY6K-AS therapeutic oligonucleotides for two weeks. Our therapeutic intervention showed a remarkable inhibition in the growth of naïve and resistant tumors. Moreover, we observed a significant reduction in the metastatic capacity of LUAD cells devoid of LY6K-AS expression. We believe that our results open new avenues of hope toward a successful treatment for lung cancer based on lncRNAs. 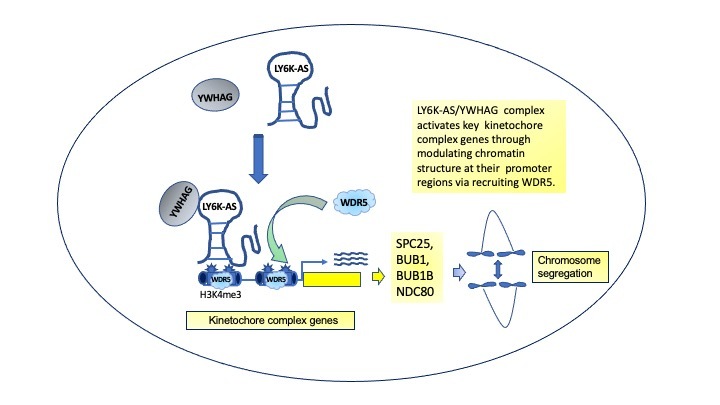