Lineage plasticity is increasingly recognized as an emergent resistance mechanism after treatment with androgen receptor signalling inhibitors. To understand determinants of resistance, the authors analyzed the transcriptomes of patient tumor biopsies before enzalutamide treatment and at progression…

Development of resistance to targeted therapies is nearly universal in cancer treatment. However, there is an incomplete understanding of resistance mechanisms for most cancer therapies due to the paucity of data utilizing matched biopsies from patients treated with these agents. For patients with prostate cancer, androgen deprivation therapy with drugs like the androgen receptor (AR) inhibitor enzalutamide (enza) is the principal treatment approach, but much remains unknown about how this drug stops working.

Prostate cancer is the second leading cause of cancer related death in men in the United States, with  34,500 deaths predicted for this year alone1. Nearly all prostate cancers are adenocarcinomas at diagnosis and driven by the AR2.  Androgen deprivation therapy (ADT) has been the principal treatment metastatic prostate cancer for over 80 years. Eventually resistance to ADT develops, though the majority of metastatic castration resistant prostate cancers (CRPC) remain androgen-dependent3. This led to the development of more potent AR inhibitors such as enza. Most patients benefit from enza4,5, but disease progression is inevitable. Previous studies implicated several resistance mechanisms, including continued AR-dependence on one end of the spectrum vs. reduced AR-dependence and lineage plasticity, or differentiation change, on the other end6-9.

Lineage plasticity is defined as a biologic process that occurs during normal development and later as a mechanism that promotes survival when cells are under stress. Plasticity may manifest as reversible or irreversible changes in cellular “identity,” whereby cells take on an alternative phenotypic or epigenetic state10. Lineage plasticity in prostate cancer is characterized by loss of canonical AR signaling. However, lineage plasticity is likely a continuum, ranging from AR activity-low tumors that remain adenocarcinomas to those that lose AR expression and express a neuroendocrine or neuronal program known as neuroendocrine prostate cancer (NEPC), and finally those that lose AR expression but do not express a neuroendocrine or neuronal program (i.e., double negative prostate cancer (DNPC)11,12.

To clarify emergent enza resistance mechanisms in patients with CRPC, we initiated a longitudinal study with metastatic biopsies prior to enza treatment and at the time of progression (Figure 1)13. Twenty-one patients had matched biopsies performed that underwent laser capture microdissection to enrich for tumor cells prior to RNA-sequencing. All samples were AR-dependent adenocarcinomas at baseline. However, at the time of progression, three tumors were classified as DNPC based on multiple transcriptional measures and immunofluorescence.

We hypothesized that the baseline samples from the three patients whose tumors eventually converted to DNPC would harbor a unique transcriptional profile compared to the other baseline samples that remained AR-driven at progression. Indeed, we identified a gene signature that was highly expressed in these three baseline tumors vs. the other 18 tumors that did not undergo lineage plasticity. A cutoff was established based on the lowest score of the three converters. Suitable validation cohorts with matched biopsies did not exist, but we further hypothesized that high expression of this signature would be linked not only to lineage plasticity risk but also poor clinical outcomes. Therefore, we first applied our lineage plasticity risk signature to two independent cohorts of patients with CRPC for whom time on AR inhibitor treatment was available. High lineage plasticity scores using our pre-defined cutoff was strongly associated with poor survival (Figure 2).

The three samples that underwent lineage plasticity showed loss of AR expression and AR activity without upregulation of classical neuroendocrine markers—most consistent with DNPC. Pathway analysis showed enrichment in several inflammatory pathways including: allograft rejection, interferon gamma and alpha response, and IL6/JAK/STAT signaling. These pathways have been identified in tumor stem cells15,16, and we postulate that the progression tumors that underwent lineage plasticity have lost a luminal differentiation program and become more stem-like. Finally, DNA sequencing studies showed conservation of mutations between baseline and progression samples from converters, strongly suggesting that outgrowths of genetically distinct clones did not account for lineage plasticity and raising the possibility of epigenetic changes.

Resistance mechanisms in the wider cohort

What about the eighteen patients whose progression tumors did not undergo lineage plasticity? Importantly, all the patients in our cohort, including these 18 patients, were still taking enza at the time of their progression biopsy. We found that almost half of these patients had similar AR activity between their baseline and progression samples, suggesting that maintenance of AR function despite enza treatment explained disease progression. Though there was variability in AR function in the remaining progression samples, we observed upregulation of many of the same stemness pathways found to be upregulated at progression in the tumors that converted to DNPC. This suggests that this subset of patients had increased stemness in their tumors at progression without fully losing AR expression and AR signaling.

The treatment paradigm in metastatic prostate cancer has changed since our study was completed. Patients now often receive enza and other AR signaling inhibitors upfront along with ADT, instead of at the time of progression on ADT. Our work did suggest that the lineage plasticity risk signature we identified is extremely uncommon in hormone therapy-naive primary prostate cancer tumors from The Cancer Genome Atlas cohort. Therefore, it may be necessary to determine whether other markers exist to predict risk of lineage plasticity from the get-go, work we are currently undertaking. 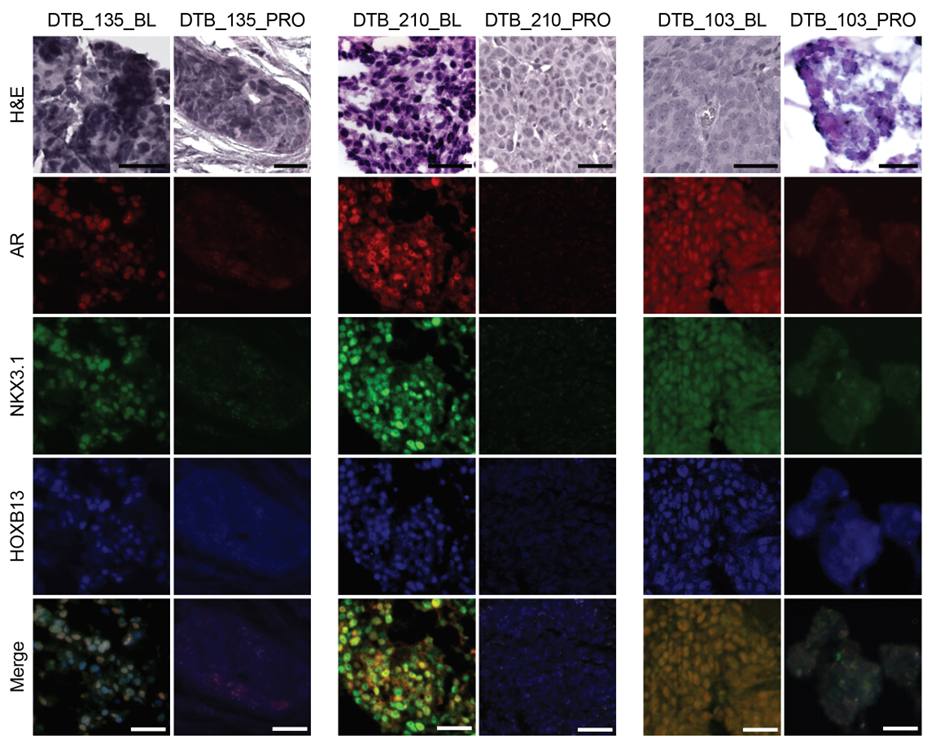