Occult lymph node metastases in tongue cancer are associated with significant morbidity and mortality. We describe a novel mechanism wherein miR-944 can regulate MMP10 to activate the AXL signaling pathway in promoting the spread of cancer to the lymph nodes.
Bhasker Dharavath and Amit Dutt
2 contributors
Like Liked by Evelina Satkevic and 5 others
0

MMP10, which is upregulated in 86% of primary tongue tumors with lymph node metastases, is negatively regulated by miR-944 and promotes nodal metastasis in an orthotopic tongue cancer mouse model through the AXL signaling pathway.

Oral cancer, also known as mouth cancer, can occur in any part of the mouth, including the lips, tongue, gums, and cheek lining 1. Depending on the stage and location of cancer, treatment options for oral cancer may include surgery, radiation therapy, chemotherapy, and targeted therapy. Tongue cancer is a type of oral cancer that forms in the front two-thirds of the tongue. It is a relatively common cancer, accounting for about 47% of all oral cancer cases in young people 2. One of the unique features of tongue cancer is that it can display occult or subclinical metastasis to nearby lymph nodes during the early stages of the disease, which can reduce patient survival by 50% 3. Lymph node metastasis is the spread of cancer cells from the primary tumor to nearby lymph nodes. In patients with detectable lymph node metastasis, neck dissection, a surgical procedure to remove lymph nodes in the neck, is a commonly used treatment. Patients with tongue cancer need timely and appropriate treatment to improve their chances of survival.

In patients with tongue cancer who have clinically negative lymph nodes (N0 status), there is controversy surrounding the type and extent of neck dissection that should be performed. Elective neck dissection (END) is currently considered the gold standard treatment for patients with N0 (no evidence of lymph node involvement) disease, but it is associated with significant morbidity and is not necessary for all N0 patients. An alternative approach, therapeutic neck dissection (TND), involves monitoring the patient without performing neck dissection and only performing the surgery if lymph node involvement is detected. This approach can reduce the risk of morbidity, but it may increase the risk of later presentation of occult metastases, which can require more extensive dissection and postoperative radiotherapy. A phase III clinical trial (NCT00193765), known as the N-zero trial, compared END and TND in patients with N0 disease and found that END was associated with improved overall survival compared to TND 4. As a result, END is now considered the standard of care for all patients with N0 disease. There is an unmet need for reliable and robust predictive biomarkers that can accurately predict negative pathological lymph node status to identify patients who can be spared from surgery with minimal risk. Such biomarkers could potentially allow for a more personalized treatment approach, improve patient outcomes, and reduce morbidity.

Studies involving tongue squamous cell carcinoma (TSCC) have often focused on advanced-stage samples, which makes it challenging to identify predictive biomarkers for early-stage disease. This is an area of active research, as identifying predictive biomarkers for early stage TSCC, could help stratify patients and improve treatment outcomes. There are several potential approaches to this problem, including using genomic analyses to identify genetic alterations associated with a higher risk of metastasis. Other approaches may include proteomic or epigenomic markers to identify patients at high risk of metastasis. It is important for researchers to continue to study this issue to improve the prognosis for patients with TSCC. Proteins that are involved in microvascular angiogenesis (the formation of new blood vessels) and lymphangiogenesis (the formation of new lymph vessels) have been identified as promoting regional lymph node metastasis (LNM) in certain cancers 5. Gene expression studies have also identified associations between LNM and chromosomal instability and defects in DNA repair, which can contribute to the ability of cancer cells to spread and survive in new locations 6. We earlier described Matrix metalloproteinase-10 (MMP10) as significantly upregulated in early-stage tongue tumor samples associated with nodal metastasis 7. Its overexpression has been linked to invasion, metastasis, and regulation of stemness in specific cancers 8-10.  However, the role of MMP10 in LNM in early-stage tongue cancer remains to be fully explored.

In this article published in Comms Biology, we found that MMP10 is overexpressed in 86% primary tongue tumors of patients with lymph node metastases. Its expression could be used to identify patients who are unlikely to benefit from elective neck dissection, as they are unlikely to have lymph node metastases, and thus avoid the invasive surgical procedure and associated morbidity. Importantly, a false negative rate of 14% means that there is still a possibility that some patients with MMP10 expression within normal ranges could still have lymph node metastases. We also found that miR-944 is downregulated in node-positive tongue tumors and that it negatively regulates MMP10 expression by targeting its 3'-UTR. Additionally, we found that MMP10 knockdown or miR-944 overexpression suppresses the proliferation, migration, and invasion of tongue cancer cells and that depletion of MMP10 in an orthotopic tongue cancer mouse model prevents nodal and distant metastases. On the other hand, overexpression of MMP10 leads to the opposite effect by upregulating the epithelial-mesenchymal transition through the activation of the gene, AXL, promoting nodal and distant metastasis in vivo. Interestingly, AXL expression is both necessary and sufficient to mediate the functional consequences of MMP10 overexpression. These findings suggest that MMP10 and miR-944 could potentially be targeted therapeutically to prevent or treat tongue cancer metastasis. Consistent with these findings, we found that MMP10 and AXL are overexpressed in tongue cancer and that their expression is associated with poor survival in these patients, based on data from the TCGA-HNSC database. We also found that the miR-944/MMP10/AXL- axis is involved in the development of lymph node metastases in tongue cancer and that targeting AXL could potentially be a useful therapeutic approach for managing these patients. Additionally, screening for the expression of miR-944 or MMP10 could potentially be used as prognostic biomarkers for predicting nodal metastasis in tongue cancer and help to reduce the number of patients who undergo unnecessary and morbid neck dissections. These are significant findings that could potentially improve the treatment and prognosis of tongue cancer patients. 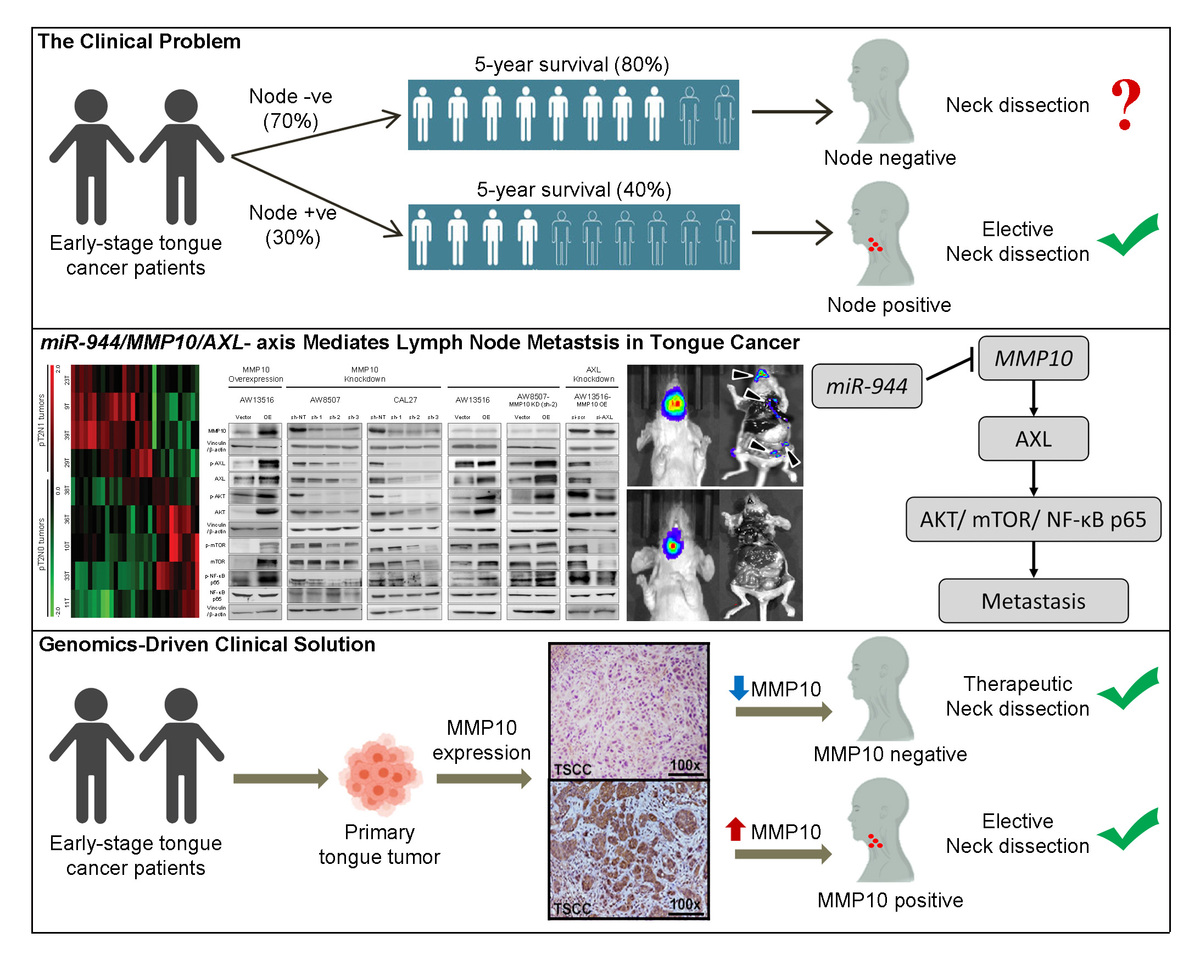 Occult lymph node metastases in tongue cancer are associated with significant morbidity and mortality. We describe a novel mechanism wherein miR-944 can regulate MMP10 to activate the AXL signaling pathway in promoting the spread of cancer to the lymph nodes.