MNT at the crossroad between MYC and NF-κB pathways

The MYC oncogene is deregulated in most tumor types and it has a vital role in the initiation, progression and maintenance of the tumorigenic process. Indeed, 28 % of The Cancer Genome Atlas (TCGA) samples show amplifications in at least one of the three MYC family genes and MYC is overexpressed in about 50% of tumors 1,2. MYC function is regulated at several levels, one of them being the antagonism exerted by the MXD proteins. Our work focuses on an MXD protein, MNT, a MYC modulator and an essential protein for the cell 3. MYC has been considered an ‘undruggable’ therapeutic target for a long time. However, recent studies show that targeting MYC can be a real possibility 4, supporting the necessity of increasing our knowledge about the MYC network.

Depending on the model, MNT works either as a MYC antagonist or a cooperator. MNT is generally a transcriptional repressor and we have shown that it can work independently of its previously thought obligate partner MAX 5. In this work, we describe a MAX-independent interaction of MNT with REL (also called c-REL), the oncogenic member of the NF-κB family. Signaling through NF-κB pathway has a major role in the control of proliferation, differentiation and apoptosis, particularly in lymphoid cells 6. In basal conditions, REL complexes remain inactive in the cytoplasm through the interaction with IκB proteins. When the cell receives an activation signal, IκB proteins are degraded and REL complexes released. REL translocates to the nucleus and activates the transcription of genes involved in apoptosis, inflammation and B- and T-cell development, among others 7.

The key findings of our work published in Oncogenesis 8 are: (1) MNT and REL interact in a complex formed between MNT’s C-terminal domain and REL’s Rel-Inhibitory Domain (RID); (2) MNT knockdown triggers the activation of the NF-κB pathway, the dissociation of REL-IκBa complexes and the translocation of REL into the nucleus; (3) MNT overexpression results in the repression of several NF-κB target genes, including IκBα; (4) MNT-REL complexes bind to IκBα’s first exon; (5) In at least two cell lines tested, MNT is necessary for cell proliferation and this function is dependent on REL; (6)The regulation of the NF-κB pathway by MNT is specific of its interaction with REL, as we did not detect binding to other NF-κB proteins tested nor effects on their cellular location. These results suggest a functional role of MNT-REL complex and thus a connection between both pathways in cell biology.

Altogether, we propose that MNT acts as a repressor of the NF-κB pathway by two mechanisms: (1) retention of REL in the cytoplasm by MNT interaction, and (2) MNT-driven repression of REL-target genes through an MNT-REL complex. This role of MNT as a regulator of NF-κB reveals a novel connection between the MYC/MXD and NF-κB pathways, two of the most prominent pathways in cancer. 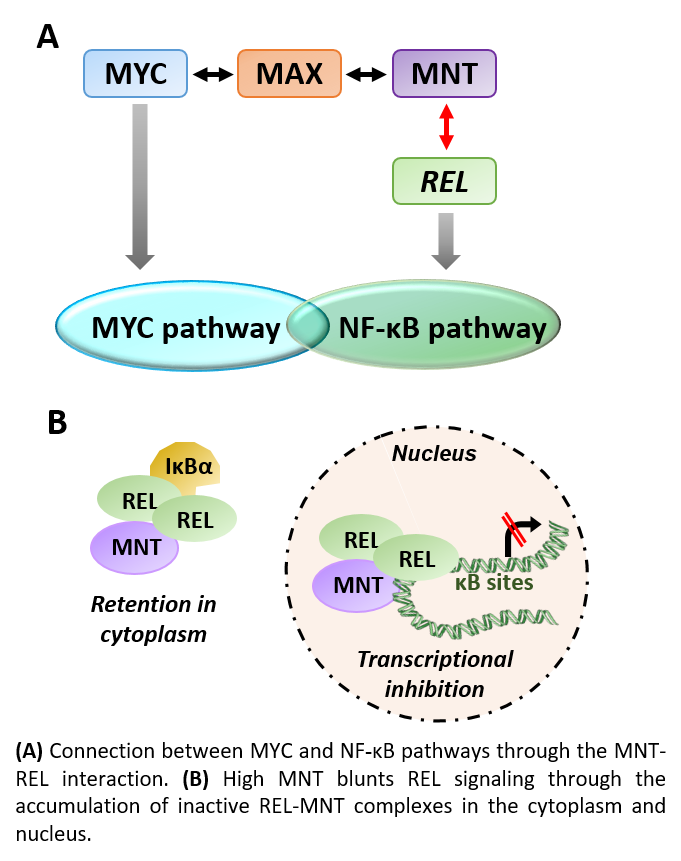 MNT at the crossroad between MYC and NF-κB pathways