Imaging underpins much of clinical decision-making. Magnetic Resonance Imaging (MRI) is an extremely versatile imaging technique and does not use ionising radiation. Signals received from biological tissues placed in a magnetic field can be altered by manipulating the pattern in which radiowaves and magnetic fields are pulsed (the pulse sequence) into them. For a human body placed in an MRI scanner, specific pulse sequences can be used to provide striking contrast between normal and abnormal tissues. Variations in the received signals allow not only the structure but also the function of tissues to be probed. It is an exciting imaging modality to work with, particularly as it requires a particular symbiosis between medical physics and radiology.

Diffusion-weighted (DW)- MRI, developed for brain imaging more than a decade ago, derives image signals from the movement of water molecules, mainly within the spaces outside cells. The less freely water can move-for example in cancer tissues where cells are crowded together and the space around them is limited- the more signal is retained in DW-MRI, and the brighter the tissue appears.

But the numerical information received to produce visually representative images also can be exploited quantitatively to provide a deeper understanding of the tissue. Quantifying the data from a region-of-interest potentially provides a biomarker for monitoring response or non-response to treatment as long as it can be measured robustly and repeatably. 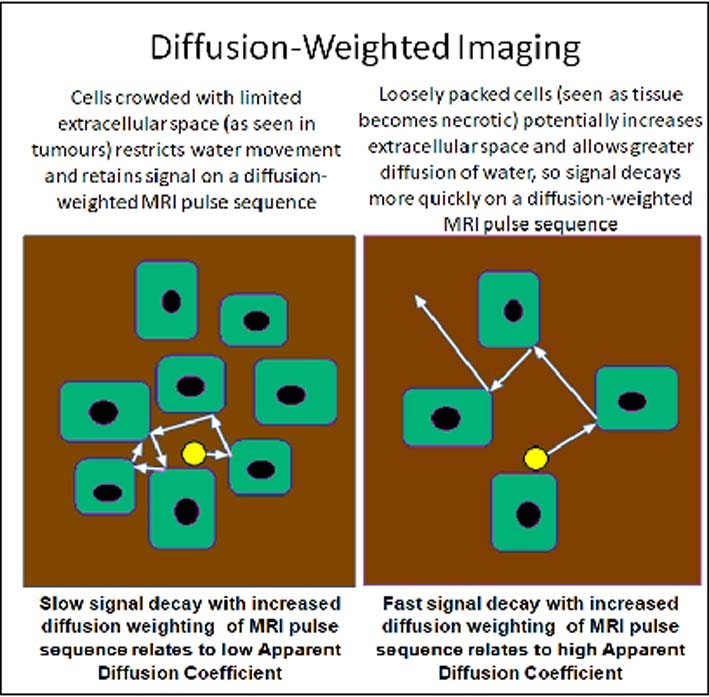 Challenges of validating imaging biomarkers in a multi centre trial

There are several major challenges to successful quantitation when pooling imaging data from multiple hospital sites and scanners within a clinical trial. Not only must standard imaging protocols be adhered to, but rigorous quality assurance be implemented and quality control maintained. In this study, site visits required trips by a clinical scientist (JMW) from the lead site in Sutton (Royal Marsden Hospital) to Addenbrooke’s in Cambridge and Morriston Hospital in Swansea to make sure scanners delivered the quality of imaging required. The local radiologist read the scans and communicated findings to the local surgeon. The local surgeon identified the lesions at surgery and provided the central radiologist with detailed annotated diagrams of the site of lesions excised, which the central radiologist then analysed. The excised lesions were also identified to the local pathologist by marking and orienting them at surgery according to a designated lesion numbering system. Stained sections from these lesions were then transferred by the local pathology department to the lead site for central pathologist review and annotation. The size of the lesions meant that often hundreds of slides per patient were couriered, sorted and reviewed to select representative sections for digitisation, annotation and analysis. It demanded a streamlined process, clarity of communication, good working relationships between departments and team members, responsiveness and above all, persistence.

The study looked at the numerical data within tumour nodules derived on DW-MRI scans of the abdomen and pelvis in epithelial ovarian cancer. In the first instance we sought to establish how repeatable the derived measurement-the Apparent Diffusion Coefficient (ADC)- was when made at multiple hospitals using different MRI scanners. We did this by scanning the same patient twice before they started their chemotherapy and showed that the ADC measurements (recorded as a median value from all voxels in the region-of-interest, ADCmedian) were more repeatable than lesion volume measurements: in ovaries, peritoneum (lining membrane) and omentum (fatty apron covering the abdominal organs) the limits of agreement were within 20% of the absolute mean value, (within 30% for lymph nodes) for the 2 repeat ADC measurements. In comparison, limits of agreement for lesion volume were often >50% of the absolute mean value on repeat measurement.

With this in mind, we went on to show that after 3 cycles of chemotherapy, in tumour nodules that remained measurable (comprising >10 voxels), 28 of 40 ovarian, 24 of 50 peritoneal, 8 of 27 omental and 17 of 22 lymph node lesions increased in ADCmedian above the upper Limits of Agreement. We wanted to understand what an ADC increase after chemotherapy equated to at a histological level. So following removal of the nodules at scheduled surgery, we matched the imaged nodules with the surgically excised nodules and then trained a computer algorithm based on detailed annotations by a pathologist to recognise remaining viable and necrotic (dead) tumour. We found that increase in ADC from baseline correlated with the amount of necrotic tumour, and that this correlation was predominantly because of the peritoneal nodules. Also, the absolute values of ADC on the pre-surgical scans (taken after neoadjuvant chemotherapy) correlated with the amount of residual tumour in the sample, and this also was predominantly because of the peritoneal lesions.

There were no significant differences between the pre-treatment ADCmedian of lesions that remained measurable (which were larger at the outset) and lesions that became non-measurable, which were initially smaller.

Implications for future exploitation of ADC as an imaging biomarker

As the ovaries and omentum are often removed surgically, and it is in the peritoneum that ovarian cancer recurs, ADC increase following treatment of relapsed disease would potentially be a useful biomarker of response. Furthermore, we have shown that this measurement can be implemented in an acceptably standardised and repeatable way across different hospitals and scanners. However, it is the collaboration across multiple specialities that made this study successful. This is reflected in the joint first authorship between Jessica Winfield (clinical scientist) and Jennifer Wakefield (clinical radiologist), who spearheaded the implementation and completion of this multicentre trial together, and kept a large multidisciplinary team motivated through it all. 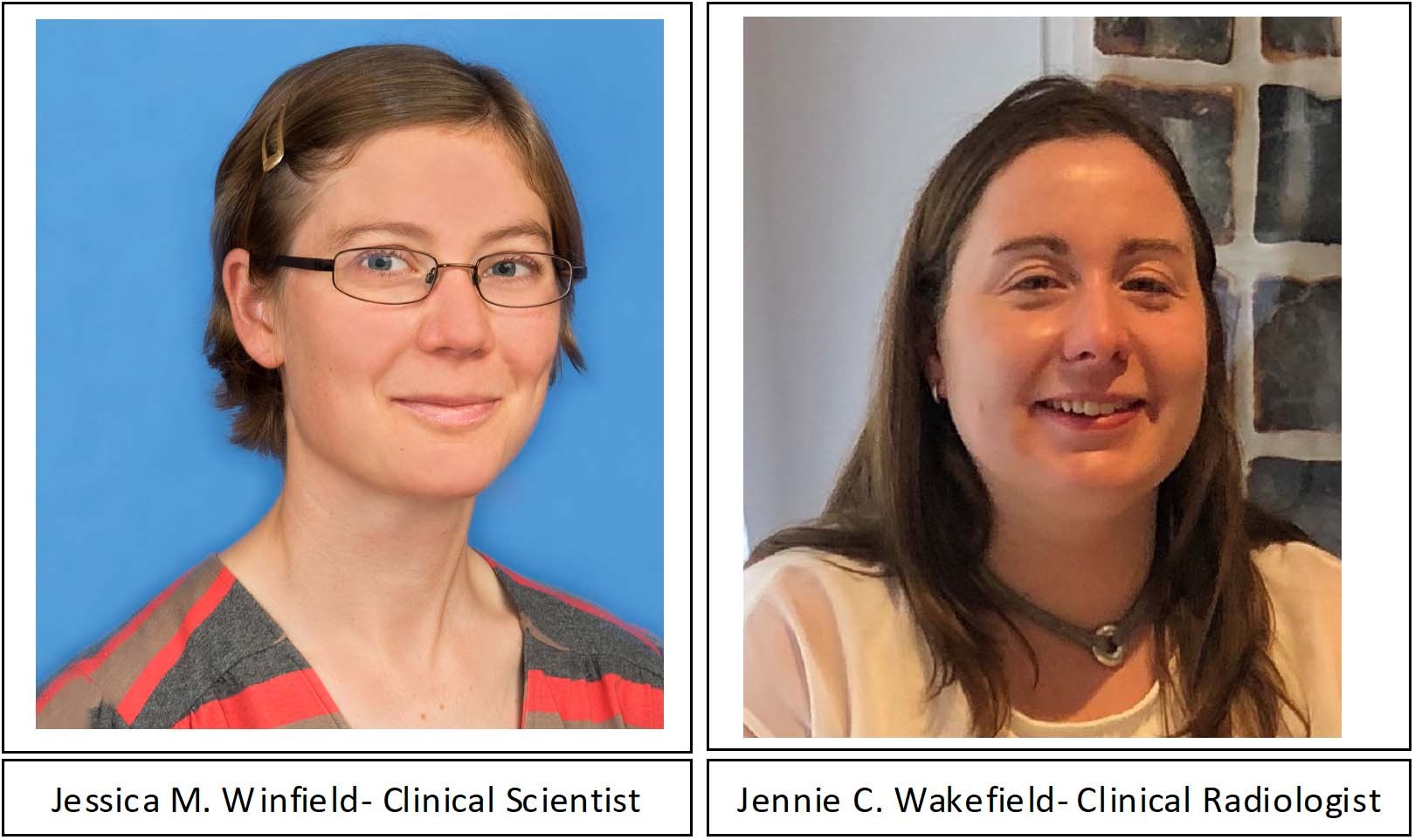 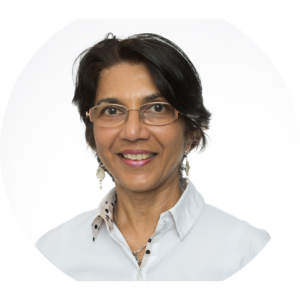 Professor of Translational Imaging (Emeritus), The Institute of Cancer Research