Single cell analysis has recently emerged as a novel technique able to deepen the knowledge of the molecular pathogenesis of cancer. Primary Myelofibrosis (PMF) is an hematological neoplasm characterized by the expansion of the myeloid compartment. Several genetic lesions on CD34+ hematopoietic stem cells have been addressed as responsible for its onset and progression. Mutations in JAK2, CALR or MPL genes are described as “drivers”1, while many other lesions in genes regulating chromatin remodelling (TET2, ASXL1), splicing (SRSF2, U2AF1) and cell proliferation (FLT3, RAS) contribute to disease features and patients’ prognosis2.

In our laboratory we studied the clonal heterogeneity and transcriptional landscape of a JAK2-positive PMF patient during leukemic transformation. In order to address this issue, we performed single cell genomic and transcriptomic analysis on CD34+ hematopoietic stem cells in three different timepoints: the chronic phase, the accelerated phase and the leukemic phase. The patient has been treated with Ruxolitinib, but without a significant response.

Genomic analysis demonstrated that TET2 was the first mutated gene at disease onset. This may be accounted for the unresponsiveness of the disease to Ruxolitinib, which has been described to be more effective in JAK2-first patients3. Clonal heterogeneity increases during disease progression, probably due to TP53 mutation, which is the main driver of the accelerated phase and favours the accumulation of genomic lesions. Blastic phase is instead characterized by the expansion of a FLT3-mutated clone that is the main driver of leukemic evolution. It is worth to mention that FLT3 mutation is detectable in the chronic phase only by single cell analysis and not from bulk diagnostic NGS.

Interestingly, SRSF2 P95H mutation, traditionally described as heterozygous due to SRSF2 ubiquitous function4, was found homozygous in several cells. To exclude a possible bias introduced by whole genome amplification, to which single cells were subjected, we analysed SRSF2 P95H mutation by means of SNP genotyping performed on CD34+-derived colonies. This experiment confirmed the homozygosity of the mutation, highlighting that the variant allele frequency in bulk is not a reliable tool to assign variants’ zygosity.

Single cell RNA-sequencing revealed the marked downregulation of interferon signaling and the activation of PD-1/PD-L1 axis during disease progression, causing the immune escape of leukemic cells.

Pathways related to extramedullary hematopoiesis, a typical manifestation of PMF advanced phase, were also activated. Moreover, since FLT3 mutation favours the transcription of FLT3 itself5, we also observed an increase in FLT3-expressing cells during disease evolution.

Of interest, trajectory analysis underlined a more primitive phenotype of leukemic cells in comparison to CD34+ cells in the chronic phase, demonstrating that these cells underwent a progressive differentiative block resulting in the development of secondary leukemia.

In conclusion, our work may serve as a proof of principle that the precocious identification of mutations predictive for leukemic transformation can be achieved only by genomic single cell analysis and can be useful to set up personalized therapeutic strategies. To this end, single cell transcriptomics may provide a new level of information through the identification of molecular mechanisms that drive disease progression and leukemic transformation in different stem cell compartments. 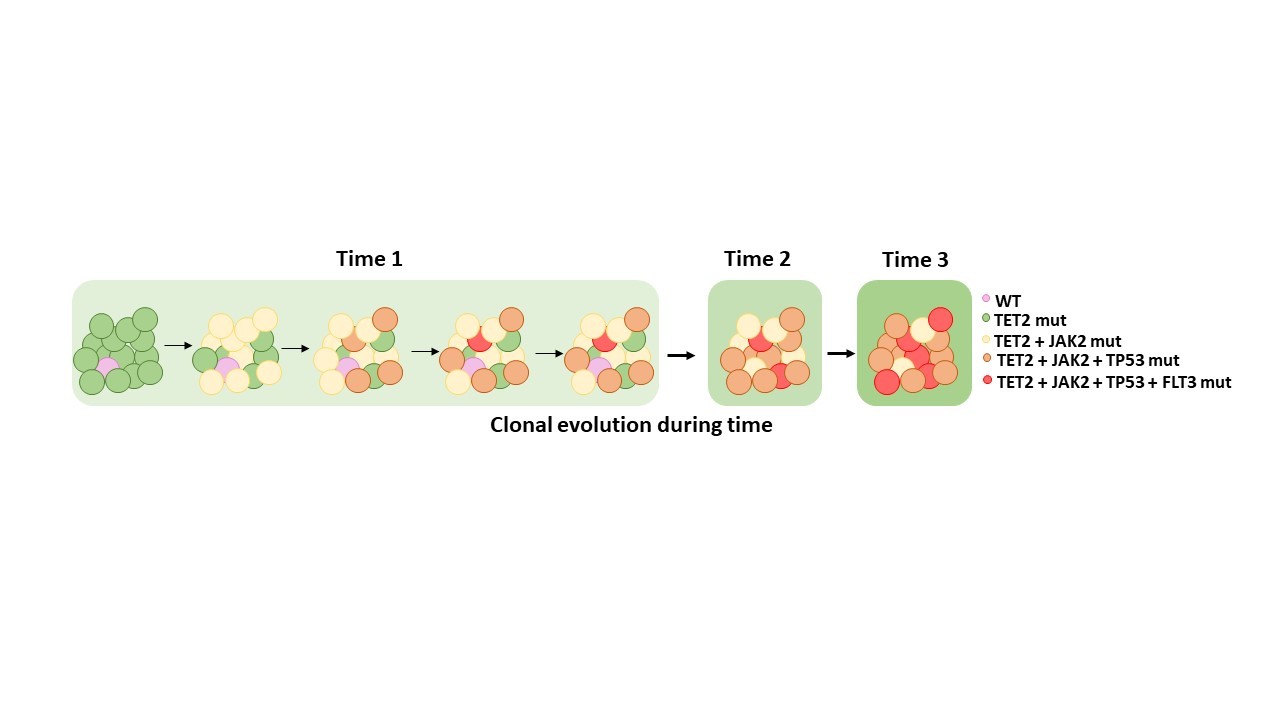