Understanding the role of MYC in primary prostate cancer sounded like a straight-forward question. As a post-baccalaureate fellow just having taken a Biology of Cancer class, I thought of MYC as a major oncogene that resulted in uncontrolled cell proliferation, driving cells to replicate industriously. I anticipated that such a well-characterized, ubiquitous protein must act like a gas pedal to advance cancer progression similarly in all cancers. This may be the case for other cancer types, and even in advanced prostate cancer where increased MYC activity leads to quicker disease progression and worse outcomes. However, in primary prostate cancer, this same mechanism does not apply.

Stepping into this project, our first task was to investigate MYC's role in cell proliferation. In cell culture LNCaP models expressing non-targeting or MYC-targeting hairpins, differences in cell proliferation were not as pronounced as we had anticipated. At the time, I thought this may be a function of the cell culture model, where more time of cell growth was necessary to resolve a larger proliferation difference. To further investigate, I quantified protein expression in serial IHC stained slides for MYC and Ki67. With Ki67 serving as a downstream proliferation marker to MYC, we investigated the role of MYC in driving cell proliferation. I was surprised that Ki67 expression was sparse, even in MYC-high tumors. The proliferation marker was rarely expressed, where few cells had the marker at all. Only one or two cells within a gland might be Ki67 positive. One patient had prolific Ki67 expression beyond this. The correlation coefficient of 0.4954 between MYC and Ki67 was one of the first clues that MYC may be acting through an alternative mechanism in primary prostate cancer. As we continued to investigate, looking at the ssGSEA MYC activity signature score and ssGSEA proliferation signature score, we observed a similar correlation coefficient of 0.4822. Now it was clear at both a protein and transcript level, in our samples and in larger scale publicly available data sets, we were able see the role that MYC is not just a driver of proliferation in most primary prostate cancers. 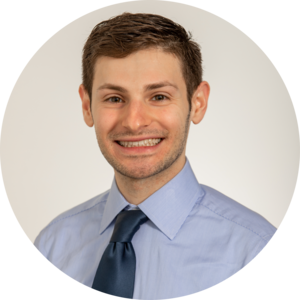