The most challenging part of NGS-based IGHV analysis in CLL concerns the interpretation of the findings rather than the analysis per se. ERIC and EuroClonality-NGS are working hard on addressing open issues and on standardization. See Davi et al., Leukemia 2020, doi: 10.1038/s41375-020-0923-9. 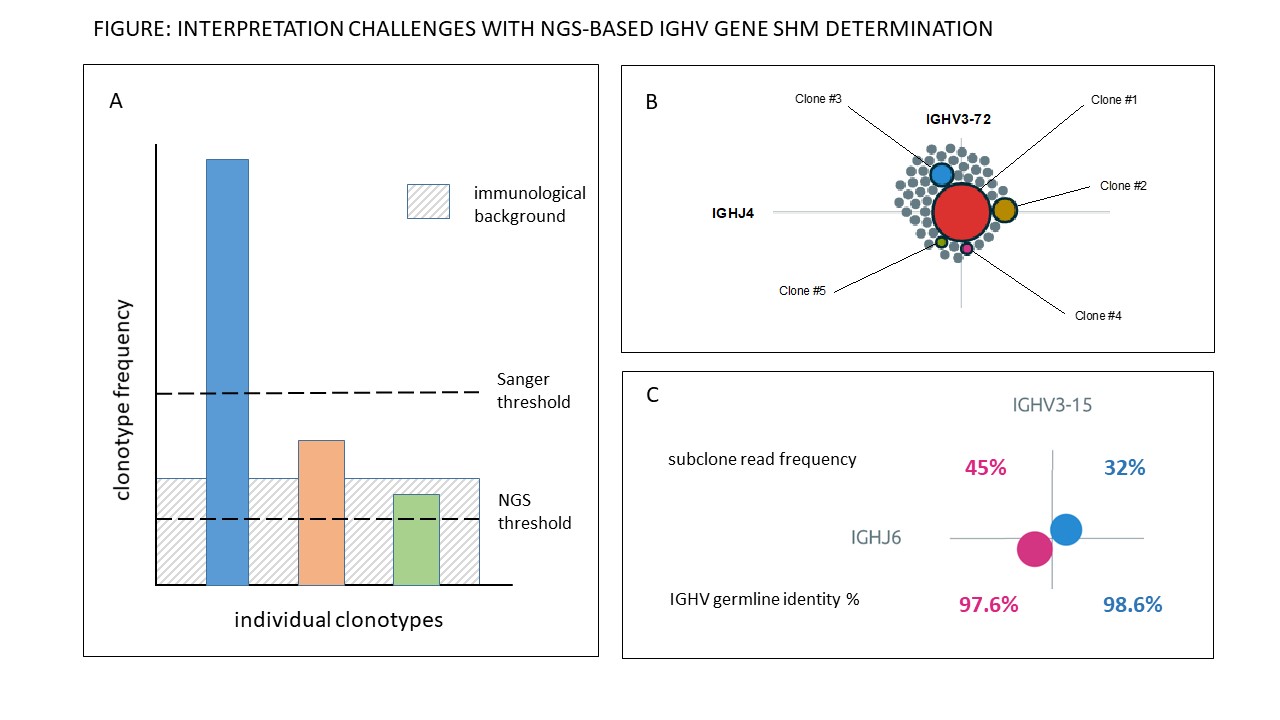 The somatic hypermutation (SHM) status of the clonotypic IGHV genes is a robust prognosticator, allowing patients to be stratified into ‘IG-unmutated’ (U-CLL) and ‘IG-mutated’ (M-CLL) categories with fundamental differences in biology and outcome, including therapy response. Regarding the latter, mounting evidence suggests that U-CLL patients benefit the most from novel targeted agents compared with chemoimmunotherapy that, instead, may still be considered a valid therapeutic option for (at least a fraction of) M-CLL patients. Hence, IGHV SHM status is thus not only a prognosticator but also a predictor, assisting in refined clinical decision making in CLL.

The advent of next generation sequencing (NGS) has opened new possibilities for immunogenetics. That said, NGS immunogenetics, comes with challenges regarding both in vitro and in silico aspects, hence highlighting the need for further work towards standardization. Realizing and responding to this need, since 2012, the EuroClonality-NGS Working Group has placed great emphasis on the development of robust sequencing protocols and bioinformatics pipelines. Particularly for CLL, a collaboration was established between the EuroClonality-NGS Working Group and ERIC (European Research Initiative on CLL) aimed at offering a solid solution to the community of lab diagnosticians and CLL researchers at large. This is both relevant and timely, in view of the ever-increasing implementation of NGS-based diagnostics in every-day clinical diagnostics, even for assays not in dire need of NGS like the determination of IGHV gene SHM status in CLL.

The most challenging part of NGS-based IGHV analysis in CLL concerns the interpretation of findings rather than the analysis per se. Open issues include: (A) true meaning of minor clonotypes; (B) clinical impact of intraclonal diversification of IG genes; (C) relevance of 98% germline identity cut-off value for discriminating between M-CLL and U-CLL.

Definitive answers to these issues will require additional evidence: ERIC and EuroClonality-NGS are working hard to obtain it and welcome any interested scientist/group for sharing experiences and good practices.