The exposure to stress is a common and recurrent event of living organisms, and it is particularly relevant in malignant tumor tissue. Melanomas are exposed to many sources of oxidative stress derived from endogenous effectors and from the tumor microenvironment. Thus, efficient countermeasures are required to keep the stress in check.

The transcription factor NRF2 is the master regulator of the oxidative stress response. It responds to acute reactive oxygen species (ROS) or electrophilic stress, but has a short half-life in absence of stress, as it is quickly degraded by the KEAP1/CUL3/RBX1 E3-ubiquitin ligase complex. Its function is well investigated in lung adenocarcinoma, where mutant KEAP1 or NRF2 lead to a durable NRF2 activation [1]. In melanoma, those mutations are only very rarely observed and the role of NRF2 is less well understood. Thus, we asked ourselves: How relevant is this short-lived emergency transcription factor in melanoma?

We set out to investigate this question under stressed and unstressed in vitro conditions and in an immune-competent mouse model. As expected, we found that NRF2 was instrumental in keeping the ROS balance in melanoma, even in absence of ROS stress, as its knockdown reduced glutathione levels and the expression of NRF2 target genes involved in antioxidant protection.

Unexpectedly, we also observed that other genes were much more affected by NRF2. Most prominently, cyclooxygenase 2 (COX2), which itself is an emergency protein, was expressed in dependency of NRF2. COX2 mediates the generation of immune-relevant lipid mediators such as prostaglandin E2 from arachidonic acid. Interestingly, a strong COX/PGE2 expression was previously described to be involved in immune evasion in melanoma [2-4]. PTGS2, the gene encoding COX2, is no direct target gene of NRF2, but was induced in an ATF4-dependent manner downstream of NRF2, either under basal conditions or after stress induced by H2O2 or TNFa. In addition, NRF2 also suppressed the activity of the melanocytic lineage factor MITF and thereby led to reduced levels of pigmentation markers, which are potential antigens for T cell recognition in melanoma [5, 6]. Similar observations were made in immune-competent mouse models injected with NRF2-proficient or NRF2-deficient melanoma cells. Next to the reduction of COX2/PGE2 and the induction of MITF, NRF2-ko melanomas grew slower than controls and had a strong activation of the DNA sensing innate immune response pathway. This pathway is also associated with tumor immune infiltration and better overall survival in melanoma patients.

These data imply that NRF2 enables an immune-cold environment by inducing COX2/PGE2 and inhibiting the DNA sensing innate immune response. We speculate that NRF2, as an emergency factor activated in response to oxidative or electrophilic stress, counteracts this stress by upregulating the well-known antioxidant target genes, while simultaneously protecting the damaged cell from the immune system. This is an important strategy for vital tissue, but becomes dangerous in the context of cancer.

Although our study concentrated on melanoma, it is likely that similar events take place in other tumor entities. First hints come from the observation that KEAP1-mutated lung adenocarcinomas show less expression of innate immune response genes and less immune cell infiltrates. In addition, an earlier study demonstrated a negative correlation of KEAP1 mutations in lung cancer with a T cell inflamed gene expression profile [7].

This observation leads to the question whether NRF2 also takes a special role in the resistance against immune checkpoint inhibitors such as PD-(L)1 or CTLA-4. Interestingly, NRF2 was previously reported to upregulate PD-L1, and NRF2 depletion enhanced anti-PD-1 efficacy in murine B16 melanomas [8]. In the context of therapy resistance in melanoma patients, NRF2 is unlikely to be picked up in large scale analyses, as it is not primarily regulated on RNA level, However, NRF2 is easily activated in the tumor niche on protein level, e.g. in response to oxidative stress or cytokines, when tumor cells encounter cells of the immune system. Future studies will reveal whether NRF2 is differentially activated in anti-PD-(L)1 responders and non-responders in melanoma or in other, e.g. KEAP1 mutated tumors. If this is the case, our study presents interesting downstream targets, as STING agonists [9, 10] or COX2 inhibitors might improve the response of these tumors to immune checkpoint inhibitors.

Figure : The dual role of NRF2 in regulating antioxidant and immune-evasive features

Left side: By induction of the xCT antiporter system and the γ-glutamylcysteine ligase (GCL), NRF2 secures cysteine supply and glutathione (GSH) synthesis. Glucose-6 phosphate dehydrogenase (G6PD) and malic enzyme 1 (ME1) enable the supply of NADPH, which is e.g. required for the recycling of oxidized glutathione (GSSG) to reduced glutathione (GSH). Right side: By inducing cxcloxygenase 2 (COX2) and inhibiting MITF activity, NRF2 provides the conditions for an immune-evasive tumor environment. Genes induced by NRF2 are shown in red. 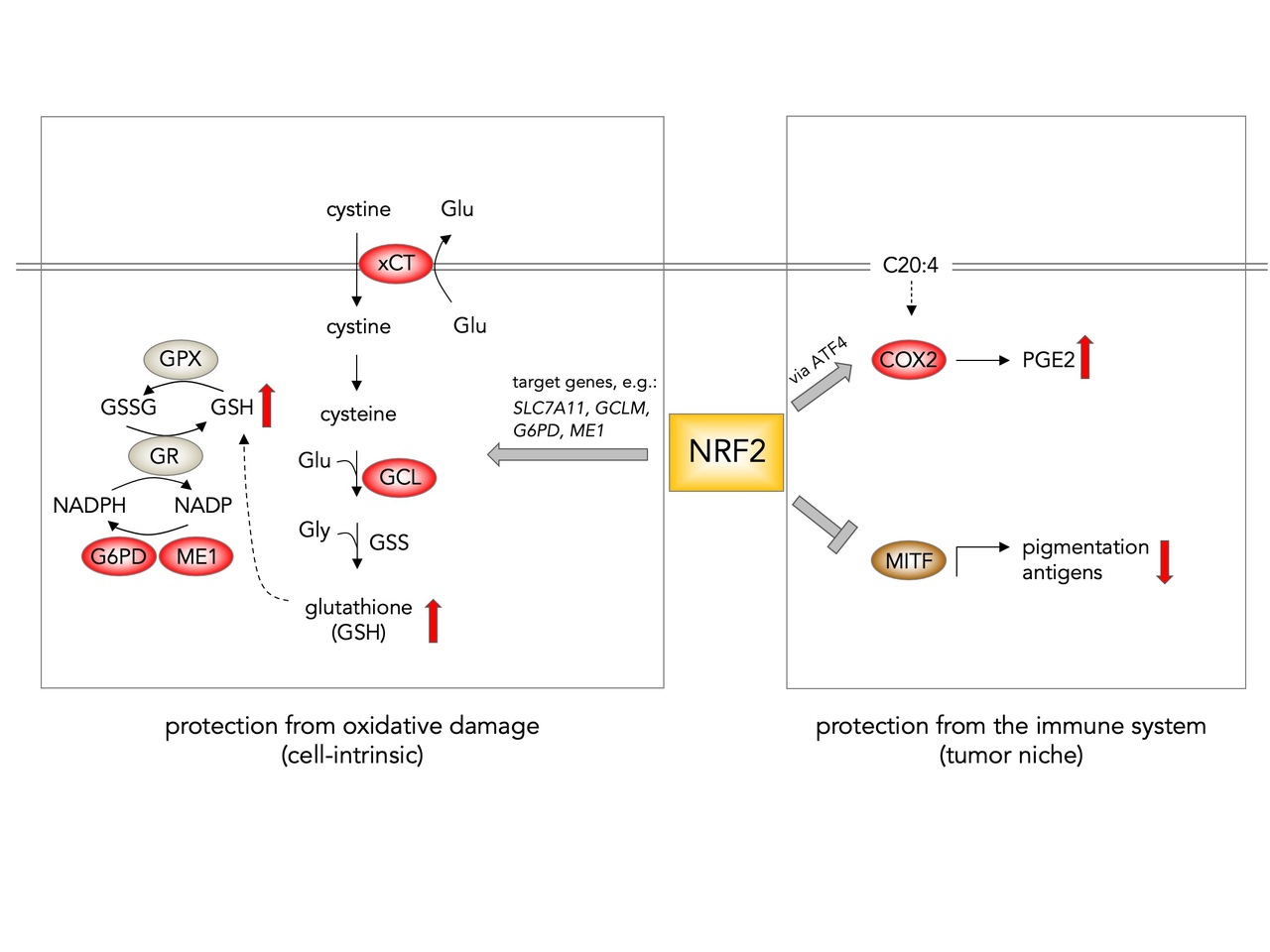