The degradation of D-type cyclins has been the focus of widespread attention for years. However, recent reports have challenged some of the previous findings. Our new study resolves these controversies and identifies the long-sought, major controller of D-type cyclins.

When I first joined NYU as an incoming Ph.D. student in 2014, my mentor and principal investigator, Dr. Michele Pagano, was adamant in his decision to embark me on a quest that would eventually take nearly seven years to complete: the identification of a ubiquitin ligase of D-type cyclins. While conducting his postdoctoral studies, Dr. Pagano was among the first to study the three D-type cyclins (namely, cyclin D1, D2, and D3) as central regulators of the G1 phase of the cell-division cycle1-5. In particular, he discovered that D-type cyclins are very labile proteins, whose degradation is enhanced upon genotoxic stress5. Soon after, a plethora of research groups initiated studies that would eventually lead to the identification of seven different substrate receptors of CRL1 ubiquitin ligases (i.e., FBXO4, FBXO31, β-TrCP, FBXW8, SKP2, FBXL2, and FBXL8), and the anaphase-promoting complex/cyclosome, as regulators of D-type cyclins’ degradation6-17. However, a study published in 2012 by the laboratory of Dr. Keiichi Nakayama found that the stability of cyclin D1 (the founding member of the D-type cyclins family) was not affected by CRL1 or APC/C activities, and suggested that another ubiquitin ligase for D-type cyclins must exists to explain their rapid turnover18. Puzzled by these observations, Dr. Pagano – who still has a special place in his heart for D-type cyclins after so many years – decided to rectify some of the previous debates and to provide novel mechanistic insights into the understanding of D-type cyclins’ degradation. My quest had just begun.

I jump-started my journey by first evaluating the contribution of the previously reported substrate receptors to the stability of D-type cyclins, and confirmed the results obtained by the laboratory of Dr. Nakayama. Aware that an “F-box protein-centric” bias may have influenced the initial search for putative ubiquitin ligases of D-type cyclins, I decided to employ three independent, orthogonal approaches (encompassing all ubiquitin ligases) that resulted in the identification of AMBRA1 (also known as DCAF3) as the substrate receptor involved in the ubiquitin-mediated degradation of all three D-type cyclins. By combining biochemical and genetics approaches with the auxin-inducible degron system, I found that AMBRA1, initially identified as DDB1 and CUL4-associated factor 3 (hence the original name, DCAF3)19-21, promotes the polyubiquitylation of D-type cyclins, thus regulating cell-cycle progression and checkpoint activation. When I first obtained the results from our screens, CRISPR-Cas9 technologies were just beginning to emerge as a new, gene-editing tool. Eager to test this novel approach, I CRISPR-engineered multiple cell lines (both normal immortalized and cancer-derived cell lines) and found that AMBRA1 regulated the levels of D-type cyclins in all systems tested. Moreover, when AMBRA1 was missing, D-type cyclins were not subjected to further accumulation upon inhibition of the proteasome, indicating that their levels had already reached a plateau.

One day, Dr. Pagano approached me to present a research poster at the upcoming 2019 Gordon Research Conference on Cell Growth and Proliferation held in West Dover, VT. Enthusiastic to present a poster for the first time at an internationally acclaimed conference, I packed my bags and left the Big Apple, eager to meet world experts on cell cycle and ubiquitination. But the enthusiasm suddenly disappeared when, entering the poster room, my eyes landed on a poster titled “Genome-wide CRISPR/Cas9 Screen Implicates AMBRA1 in the Cellular Response to CDK4/6 Inhibition.” My heart skipped a few beats. At first glance, the poster essentially included my same results, as if my benchwork had been spied on for years. And yet, the biggest surprise came when I recognized the first author of the poster, Andrea Chaikovsky, a Ph.D. student in the laboratory of Dr. Julien Sage, whom I had met two years earlier at the same conference. Little did we know, at that time, that we were working on the same subject! After exchanging some comments, we quickly came to realize that we independently discovered AMBRA1 as the ubiquitin ligase of D-type cyclins. Yet, our conclusions stemmed from entirely different approaches. While I directly screened for regulators of D-type cyclins, Andrea performed a screen to identify the regulators of the response to CDK4/6 inhibitors, and found that loss of AMBRA1 conferred resistance to the CDK4/6 inhibitor, palbociclib. She then investigated the underlying molecular mechanisms, and found that AMBRA1 directed the degradation of D-type cyclins, converging on the same axis I had also been investigating. Interestingly, a few years prior, I had also performed a similar screen in order to elucidate what genetic alterations conferred synthetic lethality with CDK4/6 inhibitors (in CRISPR-screen terms, I was looking for negatively selected gRNAs). When I re-analyzed my data to look for positively selected gRNAs, AMBRA1 was the top hit. When I left the meeting, I was exhausted, but pleased to know that my data had already been validated by an another, independent group.

Upon returning to our respective universities, Dr. Sage and Dr. Pagano decided to keep in touch to coordinate the co-submission of our two stories, while retaining the finer experimental details in order to avoid influencing each other's research. In the upcoming months, a previous post-doc in Dr. Pagano’s lab decided to re-visit for a summer sabbatical. When he learned about AMBRA1, he immediately suggested we contact Dr. Francesco Cecconi, a colleague at his institution, who had previously generated Ambra1 gene-trap mouse models. Using this connection, we contacted Dr. Cecconi, and told him about all of our results in order to establish a collaboration aimed at dissecting the role of the Ambra1-mediated degradation of D-type cyclins in vivo. We were later informed that their group had found that lack of AMBRA1 induces DNA replication stress, and that our mechanism regarding the AMBRA1-mediated degradation of D-type cyclins could explain their phenotypes. In the blink of an eye, our two-lab party became a trio, on the way to submit back-to-back-to-back at the same journal.

On a bittersweet note, my quest has now reached its end. But as I finish this last chapter of my Ph.D. studies, I am happy to give a name to the long-sought ubiquitin ligase of D-type cyclins: AMBRA1.

Back to Nature
Next 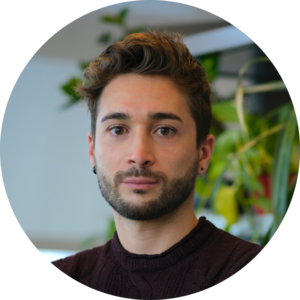