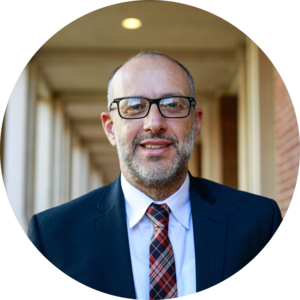 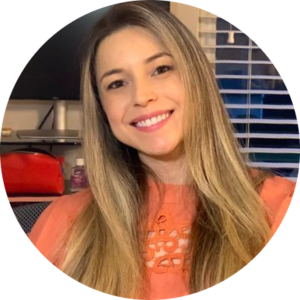 Increased angiogenesis is a mechanism by how tumor cells grow and spread in distant sites, and cancer patients with aberrant angiogenesis usually develop advanced and metastatic diseases. Anti-angiogenic drugs targeting the vascular endothelial growth factor (VEGF) signaling pathway, the key signaling pathway involved in angiogenesis, are an effective strategy to treat advanced and metastatic cancer. Bevacizumab, a VEGF-pathway inhibitor, is the first anti-angiogenic drug approved by the FDA in 2004, and it has been used widely in combination with other therapies to treat several types of cancer. Despite the clinical use of bevacizumab for many years and its demonstrated efficacy, patients frequently experience hypertension and proteinuria (a sign of kidney toxicity) during treatment, limiting the efficacy of the cancer therapy and posing a threat to patient health and quality of life.

My main scientific interest is the optimization of cancer therapy, which can be achieved by different approaches, ranging from precision medicine approaches to developing strategies for novel anti-cancer agents. I am currently working as Medical Director at AbbVie in Oncology Early Developments, but during my tenure at the UNC Eshelman School of Pharmacy, I was leading efforts towards the discovery of genomic determinants of toxicity of VEGF-pathway inhibitors. In that effort, my primary goal was to identify new genetic variants that could be assessed in patient samples before treatment with these drugs to identify those patients at higher risk of developing toxicities. Dr. Quintanilha joined my lab in 2019, and since then, we have combined efforts toward this goal. In fact, we both are coinventors of a patent for methods of identifying the risk of bevacizumab-induced proteinuria and hypertension, resulting from one of our most exciting findings that have been recently described in BJC1. In this BJC publication1, we describe the results of the largest genome-wide association study (GWAS) of bevacizumab-induced hypertension and proteinuria. To perform this analysis, we have used data from 1,039 patients of European descent with advanced or metastatic pancreatic, prostate, or breast cancers treated with bevacizumab from four clinical trials from the CALGB/Alliance (CALGB 80303, 40503, 90401, and 40502). In addition, in collaboration with researchers from Indiana University, we have validated our top hit for hypertension in a fifth randomized phase III clinical trial (ECOG-ACRIN E5103) of 582 patients of European descent with breast cancer treated with bevacizumab from the ECOG-ACRIN group.

Interestingly, the genes related to the most statistically significant genetic variants selected based on pre-specified criteria have consistent biology with the phenotypes herein investigated. For example, our top hit discovered in the GWAS analysis for bevacizumab-induced hypertension and validated in the additional cohort was rs6770663, an intronic genetic variant in a gene that encodes a subunit of the K+ channel, KCNAB1, the deletion of which is associated with elevated blood pressure2. From a mechanistic perspective, the serum response factor (SRF), a cardiac-enriched transcription factor, is more likely to bind the major allele A than the minor allele G of rs67706633, possibly activating the transcription of KCNAB14. Our proposed mechanism is that in patients with the G allele of rs6770663, lower activation of KCNAB1, impaired activation of the K+ voltage-activated channel, and increased vasoconstriction results in an increased risk of bevacizumab-induced hypertension. We have illustrated this putative model in the figure below.

Proposed mechanism of rs6770663 in KCNAB1 in an endothelial cell for bevacizumab-induced hypertension. (Created with BioRender.com.) 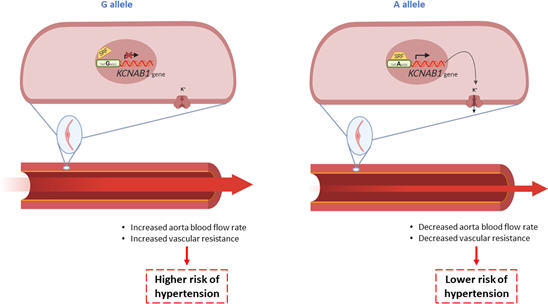 For proteinuria, the top hit was the variant rs339947 located close to TRIO, which codes to a Rho guanine nucleotide exchange factor. Bevacizumab-induced proteinuria is characterized by glomerular damage, and TRIO is highly expressed in the specialized glomerular cells, podocytes. TRIO coded protein contributes to podocyte injury by inducing Rac15. Genetic variants in moderate linkage disequilibrium with rs339947 have been associated with TRIO expression in the glomerulus6. Thus, we postulate that patients with the minor allele A of rs339947 might have an increased TRIO expression in the glomerulus compared to patients with the major allele C. Higher TRIO expression leads to an increased podocyte injury that would result in an increased risk of bevacizumab-induced proteinuria.  We have illustrated this putative model in the figure below.

Proposed mechanism of rs339947 close to TRIO in a podocyte for bevacizumab-induced proteinuria. (Created with BioRender.com.) 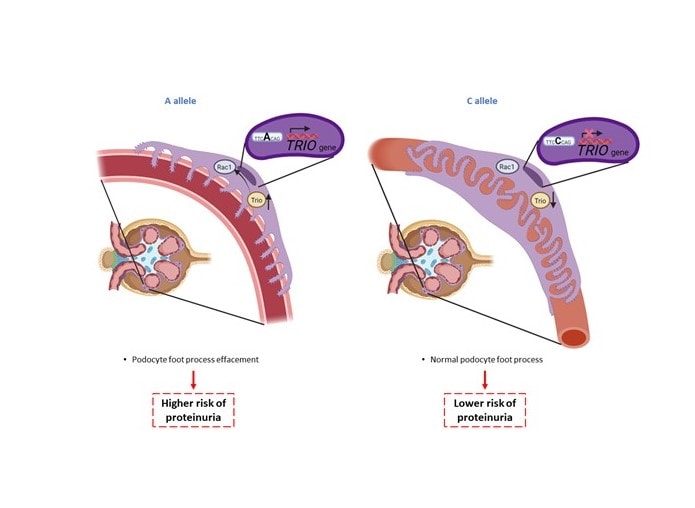 The use of anti-angiogenic drugs for cancer treatment will continue to increase in the following years, as these drugs have been recently added to immunotherapy-based regimens in the treatment of metastatic tumors. We hope our results help guide decisions on the risk assessment of patients treated with bevacizumab and other anti-angiogenic drugs. Moreover, we hope that the mechanisms proposed based on our analysis might give insights to a clearer understanding of the underlying pathophysiology of these toxicities.