p190-BCR-ABL Isoform in CML: A Minor breakpoint and A Major Impact

Discovery and targeting of BCR-ABL1 oncoprotein in leukemia is one of the most remarkable stories in cancer medicine. A reciprocal translocation between chromosome 9 and 22 results in the formation of Philadelphia chromosome, with fusion of BCR and ABL1 genes and expression of BCR-ABL1 oncoprotein. Distinct BCR-ABL1 isoforms with different molecular weights have been identified, which vary according to the breakpoint within the BCR gene partner. There are two major isoforms, designated as p190- and p210- BCR-ABL1, which associate with distinct leukemic phenotype. In Philadelphia-positive acute lymphoblastic leukemia (Ph+ALL), p190 isoform is expressed in the majority of patients, while the p210 is expressed in about one fourth of patients. In contrast, p210 is the hallmark of chronic myeloid leukemia (CML), where it is expressed in 95-98% of patients. p190 occurs as the sole isoform at diagnosis in only 1-2% of CML patients, and it associates with distinct hematological criteria, inferior treatment outcome and increased risk of progression to aggressive blast phase. Despite the reported poor outcomes of p190-CML patients, very little is known about specific transcriptional and signaling regulations in these patients. Only few studies have used mouse cell lines to compare the interactome and signaling profiles of both isoforms, but such comparisons are still lacking in primary CML cells. Furthermore, isoform-specific drug vulnerabilities have not been investigated either in cell line models or primary leukemic cells.

The major challenge to characterize p190 in CML is the scarcity of available patient samples. Moreover, previous studies have used Ba/f3 cell line as a uniform model to investigate signaling differences of BCR-ABL1 isoforms. Ba/f3 model is, however, a lymphoid lineage committed (pro-B) cell line, which may not be the optimal model to reflect CML biology. To overcome these challenges, we have performed a comprehensive genomic and phospho-signaling characterization of a small cohort of p190 CML patients (n=4), in contrast with the default p210 patients. Additionally, we used a recently developed mouse hematopoietic progenitor cell line (HPC-LSK), together with the extensively used Ba/f3 cells, to model the effect of different BCR-ABL1 isoforms in leukemogenesis, as well as investigation of isoform-specific drug sensitivities. Furthermore, we investigated the drug sensitivity profile of a cohort of Ph+ALL patients (p190=7, p210=3), to overcome the lack of appropriate samples from p190-CML patients.

JAK-STAT is a critical pathway for BCR-ABL1 downstream signaling and pathogenesis. It has been suggested that different BCR-ABL1 isoforms are having different phosphorylation preferences of STAT molecules. Interestingly, transcriptional and signaling profiling revealed consistent specific activation of interferon (IFN)/STAT1 pathway in p190-CML patients and cell lines. STAT1 and, to a lesser extent, STAT2 were hyperphosphorylated in p190- compared to p210-cells in CML models and patient samples. Furthermore, many IFN/STAT1 downstream targets were overexpressed in p190-CML cells. Activation of IFN/STAT1 axis have been linked to IFNα treatment sensitivity, which can be an attractive therapeutic option for the high-risk p190-CML patients.

Isoform-specific transcriptional and signaling regulations were reflected on the drug sensitivity profiles of both isoforms. For example, tyrosine kinase inhibitors with Src inhibitory activity, such as dasatinib and bosutinib, showed enhanced sensitivity in p190 cells, in concordance with Src hyperphosphorylation in p190-CML patients and cell lines. Another interesting target is PAK1, which also showed hyperphosphorylation in p190 cells. In agreement, PAK-inhibitor (FRAX486) showed greater inhibitory activity in p190-cells. Transcriptional data also revealed specific dysregulation of apoptotic pathways in p190-cells, which was interestingly associated with enhanced sensitivity of p190-cells to two families of apoptotic modulator drugs, IAP-inhibitors and MDM2 antagonists.

Our study provides novel insights into elucidating the specific molecular programming and signaling regulation of p190-CML patients. We have highlighted key signaling pathways and promising therapeutic targets in these high-risk patients. For example, our data suggest that high-risk p190-CML patients could benefit use of dasatinib as a frontline treatment that additionally targets activated Src signaling. Further studies involving more patients are, however, warranted to overcome the limitation of small cohort size. Some questions, such as the role of BCR-ABL1 isoforms in selecting phenotypic fate of the cells remain to be addressed.

Colleen
over 1 year ago

I'm one of the few CML patients with a 190 breakpoint. I have been on Sprycel and now on Bosulif. I now have chronic pleural effusion and am on Lasix and oxygen.

I remember reading about a man who always had good BCR/ABL scores but became very sick because all they were testing was his BCR/ABL. I wish I could find that article so I can familiarize myself with what testing he should have had. I haven't had any testing for mutations. 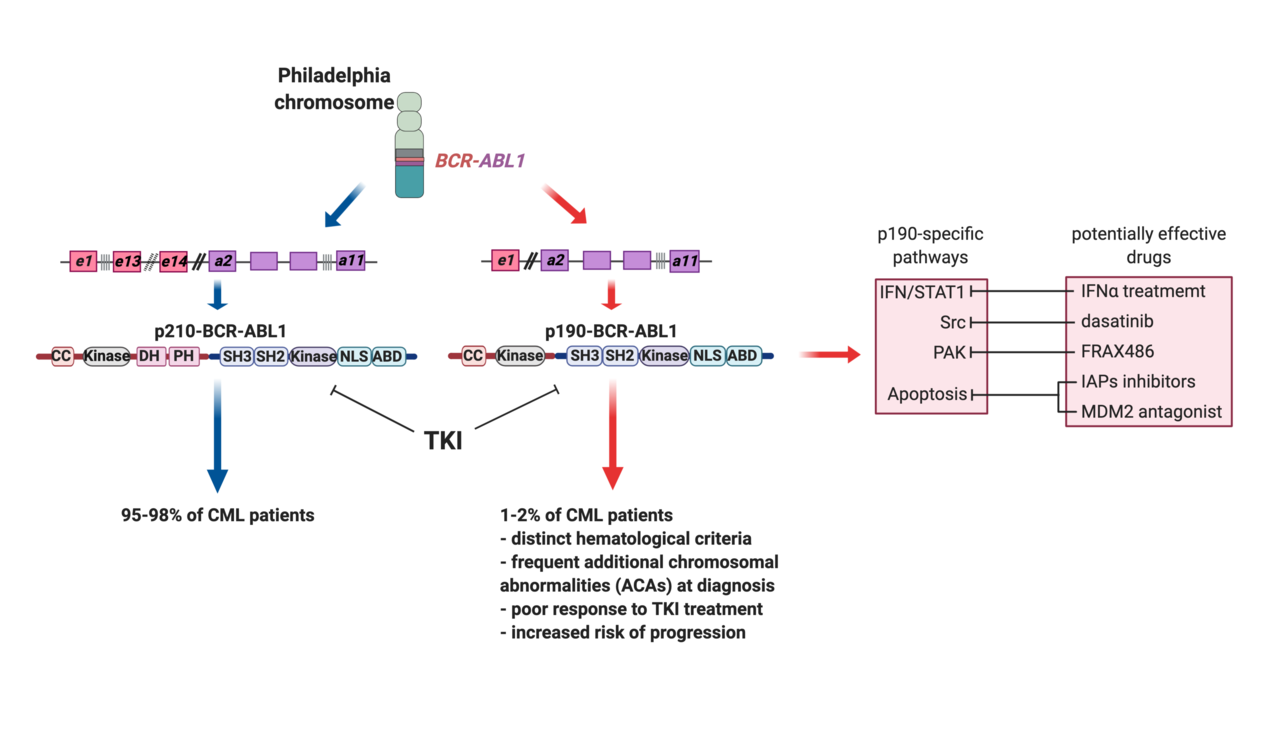 p190-BCR-ABL Isoform in CML: A Minor breakpoint and A Major Impact