Chimeric antigen receptor (CAR) T cell therapy has been proposed as a promising approach for treating glioblastoma. Here the authors show that p32 is expressed in murine and human glioma and that p32-directed CAR-T cells promote anti-tumor responses in preclinical models by targeting glioma cells an…

I was always wondered by cancer as a biological phenomenon, from my Biology 101 course in my first year of bachelor’s degree. When I joined Dr. Dinorah Friedmann-Morvinski’s lab is when I really started to get the hook-on immunotherapy. The possibility of hijacking the host immune system in order to recognize and eliminate an aggressive brain tumor such as GBM seemed like a fascinating alternative to the poor therapeutic alternatives for this type of cancer.

Modalities such as the chimeric antigen receptors (CARs) have had striking success in the clinics (1). By combining both antibody-like recognition and T cell activating function, it is possible to transform the patient’s own T-cells in an army capable of recognizing and killing cancer cells in a MHCII-independent manner (2). However, its success has not translated in treating “solid” tumors, having encountered several challenges.

One of the limitations in solid tumors is the lack of sufficient and specific targets, which can lead to CAR T cells with potential and dangerous “off tumor on target” toxicity. When it comes to GBM, it is impossible not to think first in the epidermal growth factor receptor variant III (EGFRvIII) as a specific tumor-associated antigen. Although clinical trials with CAR-T cells targeting this antigen reported evidence for specific killing of tumor cells expressing EGFRvIII, limited antitumor response has been observed in patients, who eventually succumb to the disease (3). Therefore, the identification of novel glioma-associated antigens is critical for the strategic success of CAR-T therapy in a highly heterogeneous solid tumor such as GBM.

We have previously found that p32, a normally mitochondrial protein, is being expressed in the cell surface in a cancer-specific context, thus accessible to the immune system (4). This makes p32 an attractive potential target for immunotherapy and was the starting point for us to start working in a CAR-T cell project.

Characterizing the expression profile of p32 in murine and human gliomas was the first step, validating cell-surface expression in murine gliomas derived cells established from our lentiviral-induced glioma mouse model, as well as in human established cell lines (and patient-derived glioma stem cells (PD-GSCs). We then focused in designing a CAR targeting both murine and human forms of p32, which once transduced in active T-cells, provided proof that these p32-CAR-T cells were able to recognize and specifically eliminate glioma cells.

In vivo experiments always excite me. Once the time to challenge our p32-CAR-T cells in glioma-bearing mice came, we saw that the treatment with our engineered T-cells managed not only to extended overall survival but also reduced tumor vascularization, which was not surprising given the fact that p32 expression was also described in tumor derived endothelial cells, which were also killed by our CAR-T cells. Importantly, there was no evidence of toxicity in any of the treated mice.

Our study provided evidence of specific surface expression of p32 in gliomas, and the potent antitumor and anti-angiogenic activity of p32-specific CAR T cells against glioma and tumor-associated and derived endothelial cells, indicating it may be of relevance for the treatment of glioma patients (Fig.1).

However, CAR-T cell monotherapy has its limitations. Several hurdles and new challenges have to be explored in order to move forward in the glioma immunotherapy field, challenges which, given the interest in the field this project has arisen in me, I don’t mind at all taking.

For more details here is the link to our paper: 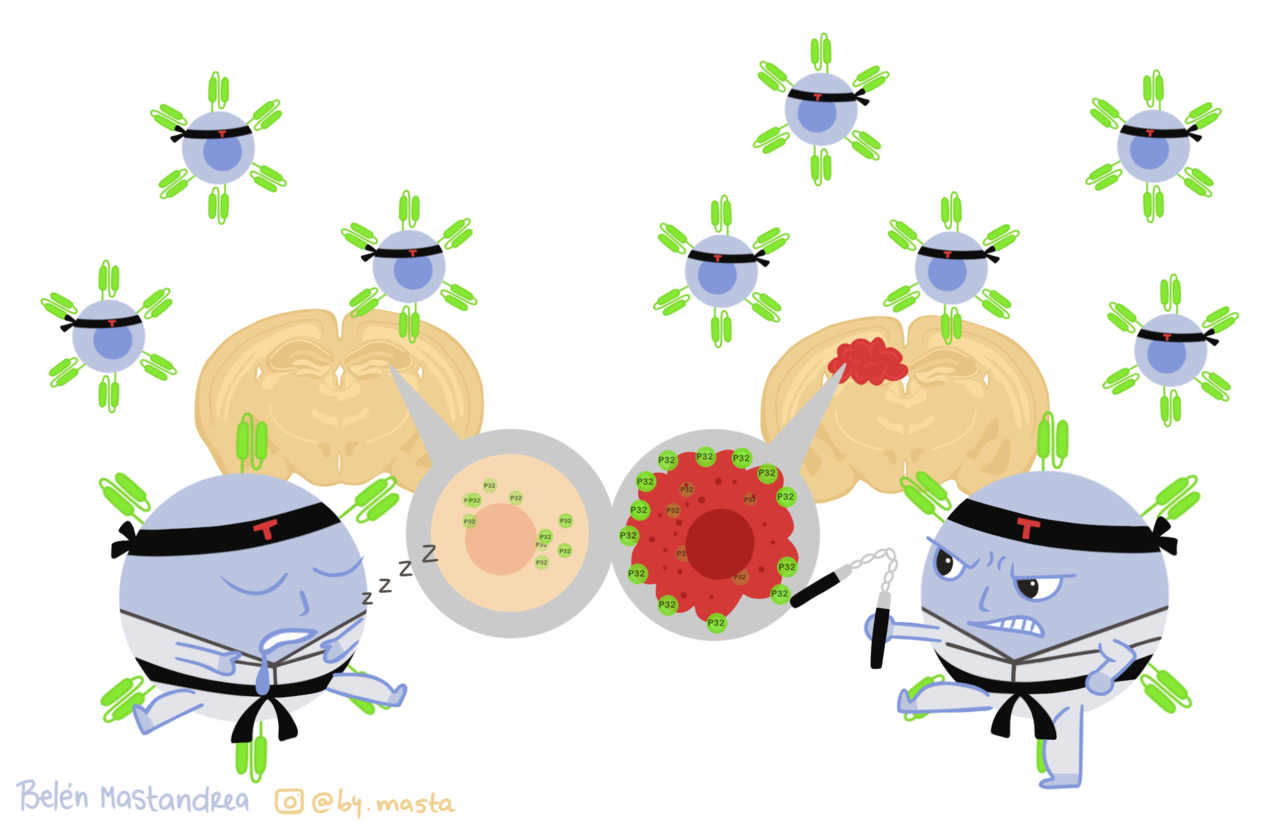