Marit Otterlei
Professor, NTNU Norwegian University of Science and Technology
Follow
Like Liked by Kaisa Cui and 1 other
0

PCNA is well known for being a nuclear protein essential for DNA replication and DNA repair. However, PCNA was recently shown to also be present in the cytosol and possess additional “non-canonical” roles important for regulation of regulating primary metabolism and thereby cellular signalling.

Multiple cytosolic proteins involved in cellular signalling and regulation of primary metabolism appear in complexes with PCNA. Many of these proteins likely interact directly with PCNA through either the PCNA Interacting Peptide (PIP)-box or the AlkB homolog 2 PCNA Interacting Motif (APIM), both conserved PCNA binding motifs. One such protein is the glycolytic enzyme alpha-enolase (ENO1), which contains a putative APIM.

In this recently published Oncogene paper, we have mutated APIM in ENO1 and shown that this impairs the PCNA interaction and strongly affects primary metabolism. Inadequate interaction with PCNA destabilizes ENO1 and therefore yields reduced levels of ENO1 in these cells. Subsequently, the metabolite pools in glycolysis before and after the step catalysed by ENO1 increase and decrease, respectively.  The metabolite pools in the tricarboxylic acid cycle (TCA) were also reduced in cells with APIM-mutated ENO1, but the cells try to counteract this by activating the TCA cycle. We find that the mutant cells have reduced growth; however, this was not due to energy depletion or reduced red-ox potential but likely due to reduced Akt-signalling.

In the second half of the article, we show that an APIM-containing peptide drug, ATX-101, was able to block the ENO1 - PCNA interactions. ATX-101 also blocks other protein-PCNA interactions. Reduced stability was also detected for the glycolytic enzyme glyceraldehyde-3-phosphate dehydrogenase (GAPDH), which was previously found in complex with PCNA, and for the pentose phosphate pathway enzyme 6-phosphogluconate dehydrogenase (6PGD), which contains a potential PCNA interacting motif. ATX-101 treatment led to reduced primary metabolism, reduced cellular signalling and reduced growth. The strongest effects were seen in haematopoietic cancer cell lines, but also activated monocytes had significantly altered metabolism and signalling. This suggested that the stress/activation level of the cells was important for the efficacy of ATX-101 in accordance with previous data showing that high affinity APIM-PCNA interactions are dependent on stress induced posttranslational modifications on PCNA. The results presented here suggest that PCNA can serve as a scaffold in metabolism, potentially in so-called “metabolons”. This term was introduced almost 40 years ago and means temporary structure-function complexes of metabolic enzymes that facilitate metabolite channelling and has recently been exemplified by identification of the “purinosome” channelling de novo purine synthesis. The activities of ATX-101 on cellular metabolism and signalling likely contributes to disease stabilizing effects observed in advanced cancer patients described in “ATX-101, a cell penetrating protein targeting PCNA, can be safely administered as intravenous infusion in patients and shows clinical activity in a Phase 1 study” which is published back-to-back doi: 10.1038/s41388-022-02582-6).

Altogether, current results from basic research on APIM-PCNA interactions to the clinical data on the PCNA targeting cancer drug ATX-101 show that PCNA´s regulatory roles during cellular stress are a highly relevant target in cancer treatment. 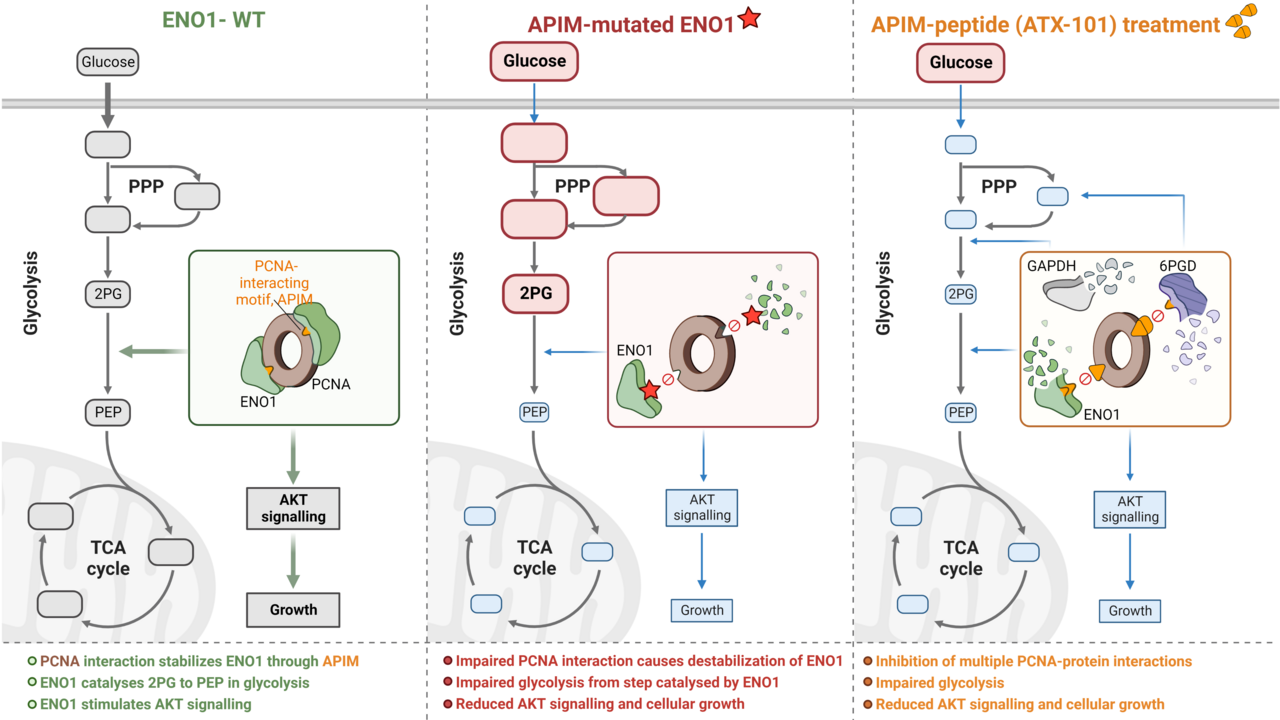