We analysed the interaction between the platelets and gastric cancer (GC) cells. Platelets derived from patients with GC strikingly enhanced the malignant behaviour of the latter, particularly their migration and invasion abilities through direct contacts.

According to recent studies, the interaction between tumour cells and the surrounding tissues, comprising various cellular and non-cellular components, plays a pivotal role in tumour invasion and progression. However, only few studies have reported the interactions between cancer cells and platelets. In contrast, previous clinical studies reported the likelihood of the development of peritoneal recurrence in GC patients who experience large volumes of intraoperative haemorrhage. Thus, we investigated the role of platelets in tumour malignancy, particularly concerning the development of peritoneal metastasis.

Our primary objective was to assess the attachment of platelets on GC cells. Therefore, we purified platelets present in the blood samples collected from GC patients. We directly co-incubated them with GC cells. Following the co-culture, we performed electron microscopy to confirm the cancer–platelet complex formation (Fig. 1). The images showed that the cancer cells were surrounded by many platelets, which emphasizes intercellular interactions during malignancy. We could observe an enhanced malignant behaviours of GC cells in several assays.

The mechanism by which GC cells received malignant signals from the platelets was another concerning issue. We aimed to explore whether this mechanism was mediated by direct or indirect contacts, such as secreted proteins and exosomes. Thus, we established a novel experimental system using ready-made products with minute modifications, named the 'Chamber-in-Chamber system' (Fig. 2) (described in supplementary data of the main article). This system facilitated the detection of direct contacts governing platelet–cancer signalling. In contrast, indirect contacts through soluble factors were identified not to enhance the malignancies of GC cells.

Our secondary aim was to identify molecular changes occurring in GC cells, derived by direct contacts with platelets. Microarray analyses demonstrated changes in multiple genes including epithelial–mesenchymal transition-related genes. Further validation analyses on mRNA and protein expression revealed significant upregulation of matrix metalloproteinase-9 expression, following direct contact with platelets. This has been previously reported as one of the invasion-enhancing factors for GC cells. We confirmed that platelets enhanced the malignant behaviour of GC cells, including adherence to mesothelial cells, migration, and invasion through direct contact. Nonetheless, intraoperative bleeding might provide an increased opportunity for platelet–cancer interactions. Considering the occasional spillage of intraperitoneal-free cancer cells from the serosal surface and lymphatic vessels during surgery, the aforementioned interaction might play a pivotal role in the intraoperative establishment of peritoneal dissemination.

By the way, how much time is required for the formation of cancer–platelet complexes? Electron microscopy results revealed that cancer–platelet complex formation was achieved within 15 min. This was followed by the gradual transmission of signals from the platelets to the GC cells within approximately 15 min or changes inside GC cells. mRNA variation became most remarkable after 48 hours. The surgeon usually removes intra-abdominal blood by saline lavage just before abdominal closure. Hence, pre-closure lavage might be unsatisfactory for minimising platelet-promoted peritoneal metastasis. Therefore, we should diminish intraoperative bleeding to minimise or inhibit platelet-promoted peritoneal metastasis. In contrast, selective inhibition of the binding between GC cells and platelets might act as a novel therapeutic target.

Our research on platelet-cancer interactions is in its initial stage. 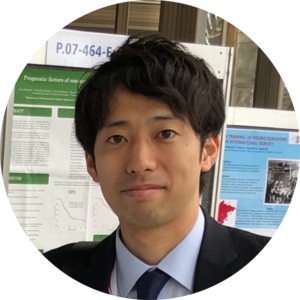