During a PET scan, ca. 100 billion 'nano-size oxygen-meters' are spontaneously created and annihilated in the human body, and the name of the oxygen-meter is positronium. Here we show how to read these oxygen-meters as a new methodology for hypoxia imaging.
Kengo Shibuya
Assistant Professor, Graduate School of Arts and Sciences, University of Tokyo, Japan
Follow
Like Liked by Kengo Shibuya

There is strong interest in finding way to detect oxygen starved cells with noninvasive methods able to detect small variation on oxygen in living systems for targeted therapy. The authors present a method based on the decay of the positronium generated in the human body during positron emission tom…

'The output is the same, but the timing is not'.

The output from a patient in the positron emission tomography (PET) is the annihilation γ-ray photons emitted according to the following equation:

First, the radioactive isotope, e.g. 18F, undergoes the β+ decay and emits a positron (e+). Second, the positron collides with an electron (e−) in surrounding molecules. Last, the positron and electron annihilate into 2 γ-ray photons due to the matter-antimatter pair annihilation. This is the conventional picture; however, it should be modified to include the positronium (Ps) as described in the lower part of the equation. Ps is a hydrogen-like atom consisting of a positron and an electron and the atom decays into 2 γ-ray photons within a short time: ca. 2 ns (1/500,000,000 s) on average in vivo. 'The output (2γ) is the same' is a reason why Ps has received little attention in PET; however, ca. 100 billion Ps atoms are spontaneously created and annihilated in the human body per examination.

'But the timing is not' is the reason why the Ps can provide new biological information on hypoxia. The emission of the output (2γ) is delayed as long as the lifetime of Ps, and the lifetime is influenced considerably by the partial pressure of oxygen (pO2) because the annihilation of Ps is accelerated by O2 due to the unpaired electrons.

The figure below shows the relation between pO2 in water and Ps annihilation rate (Γ), which is the inverse of the lifetime. Linearity is observed because the chance for Ps to encounter O2 for quenching is proportional to pO2, and the line and its equation in the figure describe how to convert Γ into pO2. The sensitivity can be estimated from the uncertainties of the equation to be ca. 10 mmHg when 300 million counts are obtained from the field-of-view (FOV) and to be ca. 5 mmHg when 1 billion counts are obtained. According to previous reports, pO2 in healthy liver tissue cells is ca. 41 mmHg [1] and that in liver tumour cells is ca. 6 mmHg [2]; therefore, Ps has enough sensitivity for discriminating the tumour hypoxia region from the control regions.

Figure: The relation between pO2/mmHg and Ps annihilation rate (Γ/μs-1), which is the inverse of the lifetime. The parentheses in the equation indicate the uncertainty (1σ).

The advantage of this method is the absolute determination of pO2 independently of the scanner and protocol. As this method is based on the fundamental properties of Ps, i.e. the spin and reactions, the results are also independent of the mechanism of the delivery/accumulation of the radiopharmaceuticals. The technical barriers related to the hardware are expected not high because the required specifications of a new timer for measuring the lifetime of Ps is comparable with that of the time-of-flight (TOF) function installed in current scanners. However, the development of radiopharmaceuticals with an appropriate radioactive isotope having a relatively short half-life, i.e. several hours/days, and a prompt-γ-ray emission, such as 44Sc [3], is essential for the clinical use.

This work [4] was published on 1 October 2020, in Communication Physics, a sister journal of Nature Communications and Communications Biology. You can find general commentaries in the press release from the University of Tokyo by Ms Caitlin Devor [5] and in a magazine from the Institute of Physics (IOP, England), i.e. Physics World, by Mr Marric Stephens [6]. Reading them would assist with the understanding of the original paper [4].

Kengo Shibuya
Assistant Professor, Graduate School of Arts and Sciences, University of Tokyo, Japan
Follow
I have changed the specialty twice, which allows me to take advantage of having a larger number of 'drawers'. I graduated from the Department of Nuclear Engineering in 2000 and my postgraduate study was on the development of materials for luminescent radiation sensors (scintillators). I received the Presentation Award of the Japan Society of Applied Physics in 2002, the first prize in the university's student invention contest in 2004, and a PhD from the University of Tokyo in 2005. Until 2009, I worked as a postdoc at the National Institute of Radiological Sciences, where I developed a radiation detector for positron emission tomography (PET) scanners. I also investigated the angular deviation that imposes a physical limit with PET. Currently (since 2009), I am an assistant professor at the University of Tokyo, where I study the interaction between positronium and matter and was awarded the Young Investigator Award of the Physical Society of Japan in 2015. For the time being, I hope to work both on pure sciences in atomic physics and applied research to establish new PET methodologies. 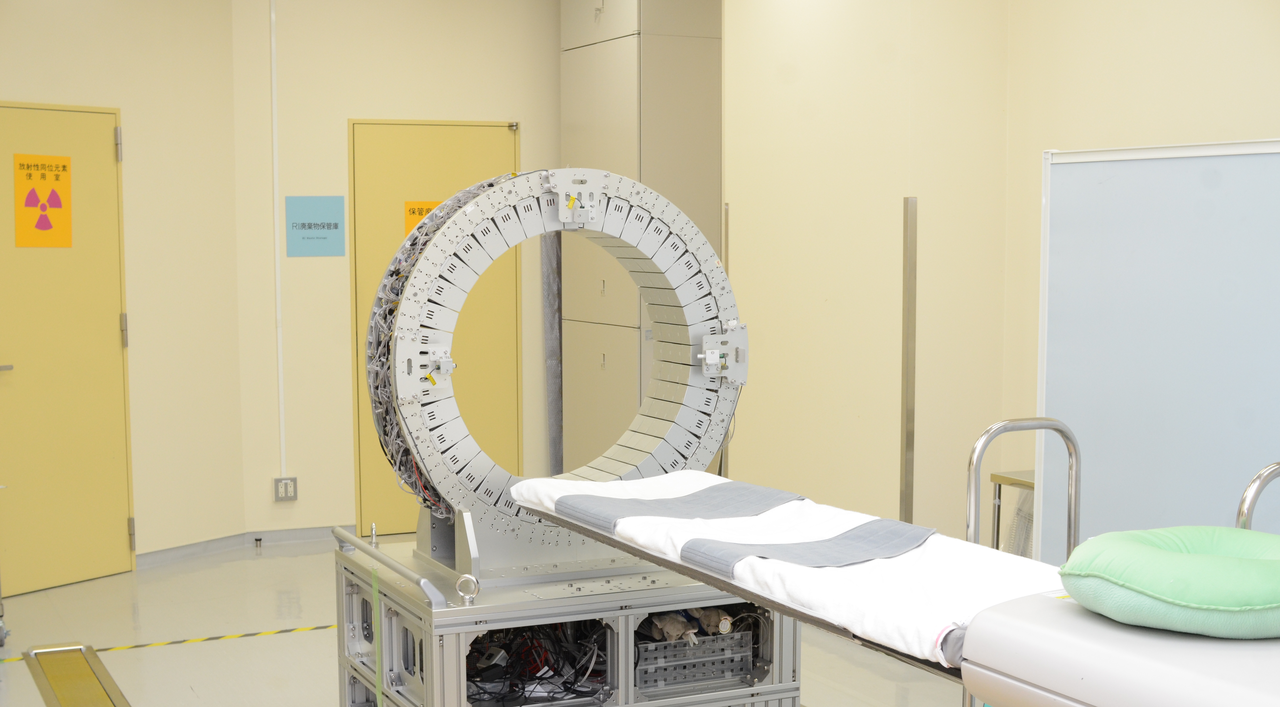 During a PET scan, ca. 100 billion 'nano-size oxygen-meters' are spontaneously created and annihilated in the human body, and the name of the oxygen-meter is positronium. Here we show how to read these oxygen-meters as a new methodology for hypoxia imaging.