POU1F1 as a novel transcriptional regulator in cancer glucose metabolism

Glycolytic shift by tumors is a phenomenon that has been observed almost one century ago. However, upstream regulators of tumor metabolism reprogramming are not fully characterized. In this paper, we identified POU1F1 as a key factor to enhance glucose uptake and lactate secretion in breast cancer.

The role of POU1F1 in pituitary gland development and homeostasis is well-known. However, POU1F1 is also expressed in non-pituitary tissues, such as human breast. Our group, located at the University of Santiago de Compostela, has been extensively studying the role of POU1F1 in breast cancer. High POU1F1 levels induce tumor promotion and metastasis1-4. Therefore, the identification of mediators and cellular processes regulated by POU1F1 will contribute to a better understanding of breast cancer etiopathogenesis.

This project starts 3 years ago with an unbiased transcriptomic analysis of MCF7 breast cancer cell line after POU1F1 overexpression. We observed by gene set enrichment analysis that POU1F1 induced a clear enrichment in the glycolysis pathway. The additional bioinformatic analysis not only confirms that breast cancer relies on higher glycolytic activity to progress but also shows a positive correlation between POU1F1 and Lactate dehydrogenase A (LDHA), the key enzyme generating lactate from pyruvate. These exciting preliminary data suggested a link between aerobic glycolysis and POU1F1 via LDHA regulation.

To evaluate the hypothesis that POU1F1 could regulate the LDHA gene at the transcriptional level, we first identified two POU1F1-binding sites in the LDHA promoter. Based on this data, which strongly supported our initial hypothesis, we started to generate breast cancer cell lines with POU1F1 overexpression and LDHA knock-down. The establishment of these cell lines would help us to interrogate the glycolytic dependency of POU1F1 to promote cancer progression.

Thus, we tested in vitro key features of cancer progression. Proliferation and migration of MCF7-POU1F1 overexpressing cells were reduced after LDHA knock-down. Furthermore, similar results were obtained for invasion using an organotypic 3D culture, which closely mimics the epithelial tissue architecture. Once we obtained these positives results, we wanted to jump to in vivo models. To do that, we used immunodeficient mice injected with MCF7 cells, MCF7-POU1F1, and MCF7-POU1F1 with LDHA knock-down. As we expected, POU1F1 highly increased the tumor volume as compared to controls. However, after LDHA knock-down we observed a clear reduction in tumor volume. Interestingly, in a collaboration with the department of radiation oncology at the Health Research Institute of Santiago de Compostela, we were able to see an increased glucose uptake in POU1F1 overexpressing tumors. Of note, interrogation of datasets from breast cancer patients demonstrated that POU1F1/LDHA expression was associated with a worse prognosis.

To finish the project and given that there was increasing evidence that connects the metabolic reprogramming with the tumor microenvironment modulation, we studied whether POU1F1 could have an impact on tumor stroma, specifically on fibroblasts. Thanks to a close collaboration with the Research Unit at the Hospital Fundación de Jove in Gijón (Spain) we obtained primary fibroblast from breast cancer patients. After fibroblast characterization, we observed that POU1F1 tumor cells increased CAF activation in a mechanism dependent on LDHA and lactate secretion.

In summary, our data revealed POU1F1 as a new factor of glycolysis regulation and demonstrate an important role for lactate in both cancer cells and fibroblasts to mediate cancer progression. 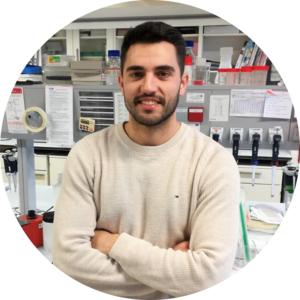