Proteasome tyrosine phosphorylation at the membrane

Protein degradation via the ubiquitin-proteasome pathway is essential for cell viability and function. How the 26S proteasome itself is regulated has become an increasingly important question, and a series of discoveries in the past decade have revealed the biochemical and biological roles of proteasome phosphorylation [1, 2]. According to PhosphoSitePlus (https://www.phosphosite.org), approximately a third of the known proteasome phospho-sites are tyrosine (Tyr/Y) residues [1]. However, research on proteasome tyrosine phosphorylation has been very limited.

Rpt2 is also known to be N-myristoylated, a co-translational modification that targets proteins to the membrane. Serendipitously, we found that Rpt2-Y439 phosphorylation absolutely depends on the N-myristoylation, i.e. membrane localization, of Rpt2. This can be explained by the identity of the Y439 kinase – Src, which is a well-known membrane-associated protein itself. Moreover, among the splicing isoforms of PTPN2, only the membrane-targeted TC-48 is able to bind and dephosphorylate Rpt2-pY439. Thus, Y439 phosphorylation is a highly localized event, with the kinase, phosphatase and substrate all confined to the membranes.

Does this mean that Src/PTPN2 can selectively regulate membrane proteasomes? Indeed, using a membrane-tethered reporter protein and whole-proteome mass spectrometry, we confirmed that Src-mediated Rpt2-Y439 phosphorylation inhibits proteasomal degradation of membrane-associated substrates. On the other hand, cells expressing the unphosphorylatable Rpt2-Y439F mutant show a drastic change in their responses to a Src inhibitor, saracatinib. This translates to a weakened anti-tumor effect of saracatinib when applied to Rpt2-Y439F-expressing lung cancer cells in a mouse xenograft model. Therefore, changing a single pTyr site of the proteasome can desensitize cancer cells to Src inhibition. In this sense, it is tempting to suggest that PTPN2 inactivation (which has been shown to boost immunotherapy against melanoma) may augment the therapeutic effects of Src inhibitors, a plausible combinatorial approach that is worth exploring.

Our work has provided the first evidence for phospho-regulation of membrane-associated proteasomes. Identification of Src and PTPN2 as novel proteasome regulators also places the proteasome in the vast signaling network of tyrosine phosphorylation that is deeply implicated in development, health and disease. 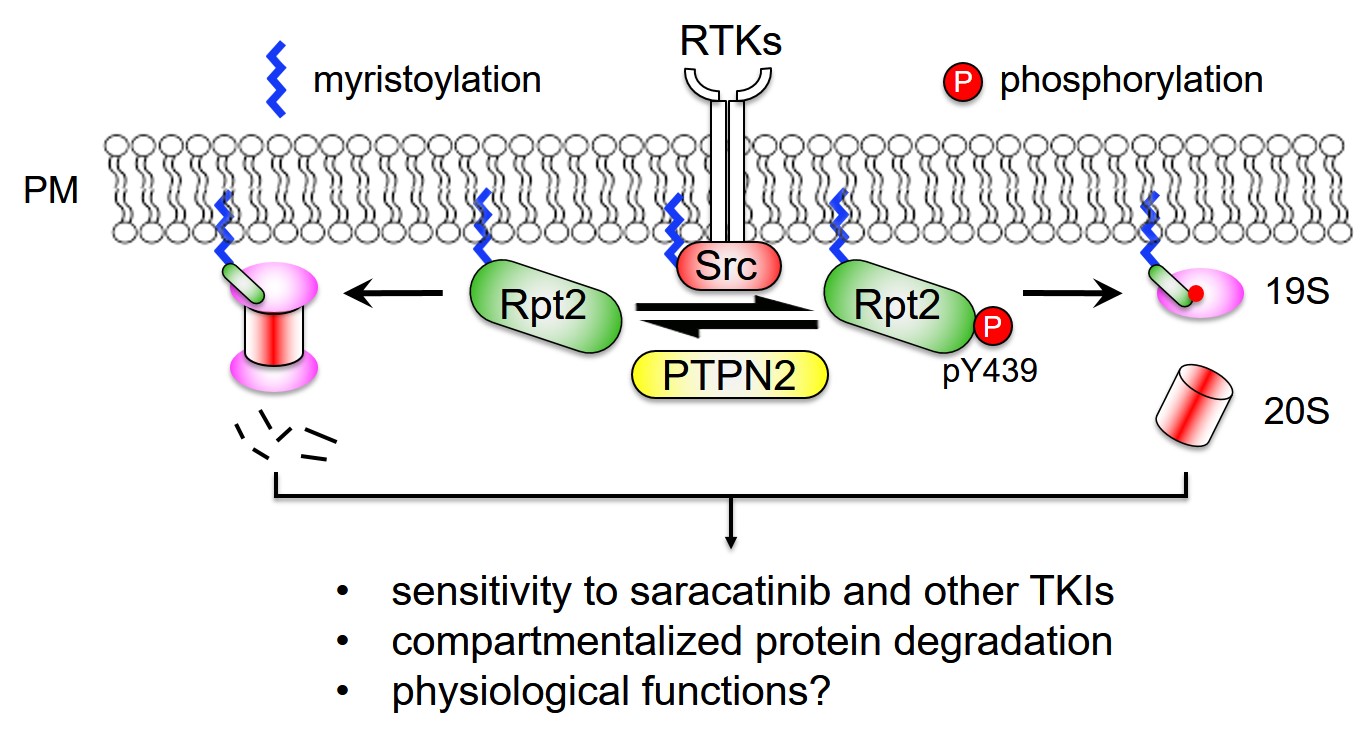