In childhood, acute lymphoblastic leukemia (ALL) is the most common malignancy and oncological cause of death, despite the good success rate of ~85% with standard regimes. High risk (HR-ALL) types have shorter event-free survival and poor prognosis, justifying individually tailored therapy approaches. They lack a unifying driver mutation, and are in major part represented by the acquired changes in one of the two major cell-signaling pathways, with the nearly complete mutual exclusion1: either an elevated STAT5-activating or RAS/MAPK/ERK-activating groups of mutations, but almost never together in the same cell. These two competing signaling pathways correspond to those physiologically activated in two distinct stages of B-cell ontogenesis: pro-B and pre-B, respectively1. A recent study suggested that concurrent mutations activating the competing pathway would be negatively selected, as they would lead to cell death, whereas inactivating mutations in the competing pathway would amplify and consolidate the main leukemia-driving pathway1. We focused our study on a specific type of HR-ALL, the ALL of Down syndrome (DS-ALL), that shows the seemingly similar spectra of mutually excluding pathway mutations2. In this study3, we found that activating changes in one pathway (CRLF2/JAK2) cause the cross-activation of the unmutated (wt) proteins of the opposite, mutation-spectrum-mutually excluding pathway (RAS). We show that wtRAS protein activation is an obligatory consequence of the CRLF2-elevation, and/or its activation using its physiological ligand thymic stromal lymphopoietin (TSLP), in combination with mutated/hyperphosphorylated JAK23. Moreover, the chemical pre-inhibition of wtRAS, or RAS-direct interacting proteins (PTPN11), but not pre-inhibition of PI3K or STAT5, prevented TSLP-induced wtRAS-GTP boost in human Ph-ALL cells, and  most efficiently reduced DS-ALL blast cell numbers; especially those from poor outcome patients3.

The three potentially impactful findings of our study are: (i) given that CRLF2-rearranged (RASwt) cases, combined with RAS-mutated cases, together encompass >80% of DS-ALL patients, this identifies RAS inhibitors as a unifying therapeutic approach; (ii) importantly, our data highlight that recent development of drugs that specifically target mutated RAS4, even if successful, can only help up to 33% of DS-ALL, and will not help patients whose RAS oncogene is activated without a mutation; and (iii) protein activities-based principal component-analysis multivariate clusters analyzed for independent outcome prediction using Cox proportional-hazards model showed that protein‐activity (but not mutation-status) was independently predictive of outcome, demanding a paradigm-shift in patient‐stratification strategy for precision therapy.  Our results are only partially concordant with the findings of Chan et al1: (i) basal STAT5 activity hints at a negative correlation with the level of basal RAS activity (FigS6E of our paper), and (ii) JAK/STAT5 inhibitors did not inhibit the growth of the RAS-mutated DS-ALL. However, the same inhibitors also did nothing to the RAS-wt cases, in which the wtRAS protein was activated despite the leukemic cells bearing  elevated CRLF2 and activated JAK23. Conversely, another discordant finding is that the competing pathway (RAS) inhibition efficiently killed these same leukemic cells, despite their mutation profile labeling them as CRLF2/JAK pathway driven. The DS-ALL may be a specific case, because the B-cell developmental stage in which malignant transformation occurs may be narrower in spectrum (majority between the B-II and B-III types5), as trisomy 21 has additional gene-dose-sensitive effects on developmental hyper-proliferation of the haematogenic lineage cells6, and B-cell lineage precursors in particular7. Even though our study addresses only DS-ALL, it nevertheless suggests that a similar analysis of wtRAS cross-activation needs to be performed on other HR-ALL types3.

We thank David Weinstock and Giuseppe Basso for helpful comments and discussions. 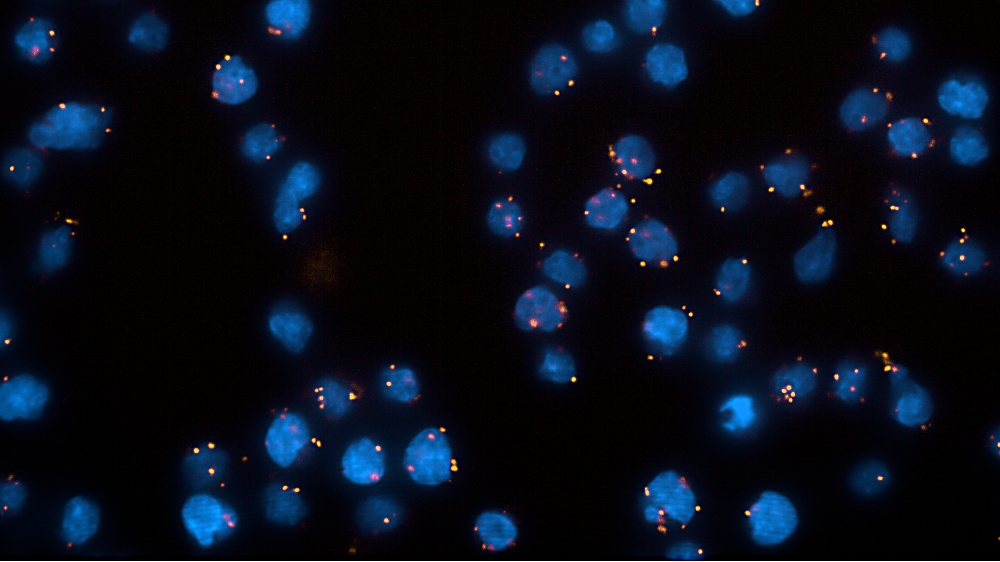 Leukemic cells from high-risk ALL patients are classified for risk by karyotype and mutation profile. We found 80% of Down syndrome-ALL activate RAS, irrespective of mutations. This protein activation, detectable directly in primary cells, informs therapy choices and independently predicts outcome.