Baek and colleagues present a proteogenomic analysis of 196 patients with pancreatic adenocarcinoma in an Asian population, identifying subtypes with invasive and proliferative features or immunogenic features, as a resource for future studies.

Recent genomic and transcriptomic analyses of human pancreatic ductal adenocarcinoma (PDAC) tissues have identified genomic alterations and genes with cancer-related altered expression1. In addition to the genomic and transcriptomic analyses, proteomic analysis of human PDAC samples and healthy tissues has recently identified proteins with altered expression2,3. However, PDAC-associated proteomic signatures have not been systematically characterized at the global level in large cohorts of patients with PDAC. Integrative analysis of the genome, transcriptome and proteome, known as the proteogenomic analysis, can provide a more comprehensive understanding of the molecular signatures associated with cancer pathogenesis4,5,6,7. Here, we present a proteogenomic analysis of PDAC.

From the WES data, we identified 12,116 somatic mutations affecting protein sequences. Based on these mutations, we identified seven significantly mutated genes (SMGs). Among the seven SMGs, six (KRAS, TP53, CDKN2A, SMAD4, ARID1A and TGFBR2) were shared with the previously identified SMGs8,9,10,11,12, while RB1 was not. We then examined correlations between somatic mutations and protein/phosphorylation levels to infer functional implications of these mutations. Somatic mutations in KRAS, TP53, ARID1A, TGFBR2/SMAD4 and RB1/CDKN2A significantly correlated with increased levels of phosphopeptides for proteins that were associated with RhoA signaling and pathways related to cell proliferation/apoptosis and cell adhesion/cytoskeleton. These data suggest that frequent mutations in PDAC can be associated with the regulation of apoptosis and actin cytoskeleton dynamics.

Genes with significant mRNA–protein correlations showed a greater association between their abundance and patient survival. Among the 3,461 genes with significant mRNA–protein correlations, we selected 321 genes with significant negative correlations with survival. These genes tended to be related to pro-tumor processes linked to invasive behaviors. By performing the same survival analysis using mRNA data from three previously reported cohorts8,14,15, we identified 19 genes that showed significant negative correlations with survival in all four cohorts and suggested these genes as potential prognostic biomarkers. For the four of them (PPL, TPI1, PTGES and DCBLD2), we further validated their cell proliferation- and cell migration-related functions based on short hairpin RNA-based knockdown experiments in AsPC1 and PANC1 cell lines. These cell-based assays support the feasibility that they could serve as potential prognostic biomarkers.

We then performed deconvolution analyses to infer cell-type compositions from bulk mRNA-seq data based on previously reported mRNA signatures17,18,19,20,21,22. Sub2-4 comprised a high proportion of basal-like tumor cells, whereas Sub1 showed a high percentage of classical tumor cells, consistent with their high tumor purity and a high proportion of ductal cells. In contrast, Sub5-6 contained a high proportion of immune cells. Sub5 also contained a high percentage of stromal cells, which may be immune-rich. However, Sub6 had high percentages of exocrine cells. Based on these results, we named tumor cell-enriched Sub1-4 as tumor subtypes 1-4 (TS1-4) and immune-rich Sub5-6 as immune subtypes 1-2 (IS1-2). We next classified the samples using the previously reported subtype signatures9,16,18 and observed that TS1 corresponded to the pure classical progenitor subtype and IS1–2 corresponded to the immunogenic progenitor and exocrine-like subtypes, respectively. However, our proteomic signatures further categorized the conventional squamous subtype into activated stroma-enriched invasive squamous TS2, invasive squamous TS3 and invasive and proliferative squamous TS4, providing a unique context for patient stratification.

Besides the low expression of B and T cell markers in TS2–4, the levels of neutrophil markers were noted to be higher in TS2–4 than in IS1–2, suggesting potential interactions between myeloid cells and lymphocytes in TS2–4. To explore such interactions in vivo, we developed orthotropic PDAC mouse models with cancer cells derived from tissues of the representative TS4 (SNU3608) and IS2 (SNU3573) for TS2–4 and IS1–2, respectively. By comparing tumor growth in these models, we found that SNU3608 tumors grew faster than SNU3573 tumors. We then used fluorescence-activated cell sorting (FACS) to examine the number of tumor-infiltrating myeloid cells and found that higher levels of infiltration of PMN-MDSCs were observed in SNU3608 tumors than in SNU3573 tumors.

Subsequently, we cocultured several types of immune cells, including PMN-MDSCs, classical monocytes and nonclassical monocytes, isolated from SNU3608 tumor-bearing BALB/c nude mice with T cells from naïve BALB/c mice. We measured T cell proliferation using carboxyfluorescein succinimidyl ester (CFSE) assays. In cocultures with PMN-MDSCs, the mean fluorescence intensity of CFSE was increased for both CD8+ and CD4+ T cells compared with in control cultures, indicating that T cell proliferation was reduced as a result of exposure to PMN-MDSCs. Together with the above observations, these data suggest that PMN-MDSCs could be responsible for the depletion of anti-tumor immunity observed in TS4 with poor prognosis.

Our proteogenomic analysis demonstrates that proteomics data provide additional insights beyond those available with genomic data alone, and improve our understanding of PDAC. Our analysis further provides patient subtypes, subtype characteristics and potential targets for the subtypes that could be helpful in tailoring therapeutic options. Especially, based on distinct characteristics of agressive TS2-4 tumors, we proposed alternative combined therapeutic strategies for these tumors. For TS2 tumors, blockades of activated stroma, such as FAP inhibitors23, can be augmented with ROCK inhibitors24,25. For the most treatment-resistant TS4 tumors, (1) a therapy targeting PMN-MDSCs (e.g., IL10 blockers26,27) to improve CD8+ T cell-mediated anti-tumor immunity and (2) cell cycle inhibition (e.g., CDK1 inhibitors28) can be additionally considered to improve treatment efficacy. As a result, our findings can serve as a fundamental basis for making substantial advances in molecularly guided precision diagnosis and therapy of PDAC. 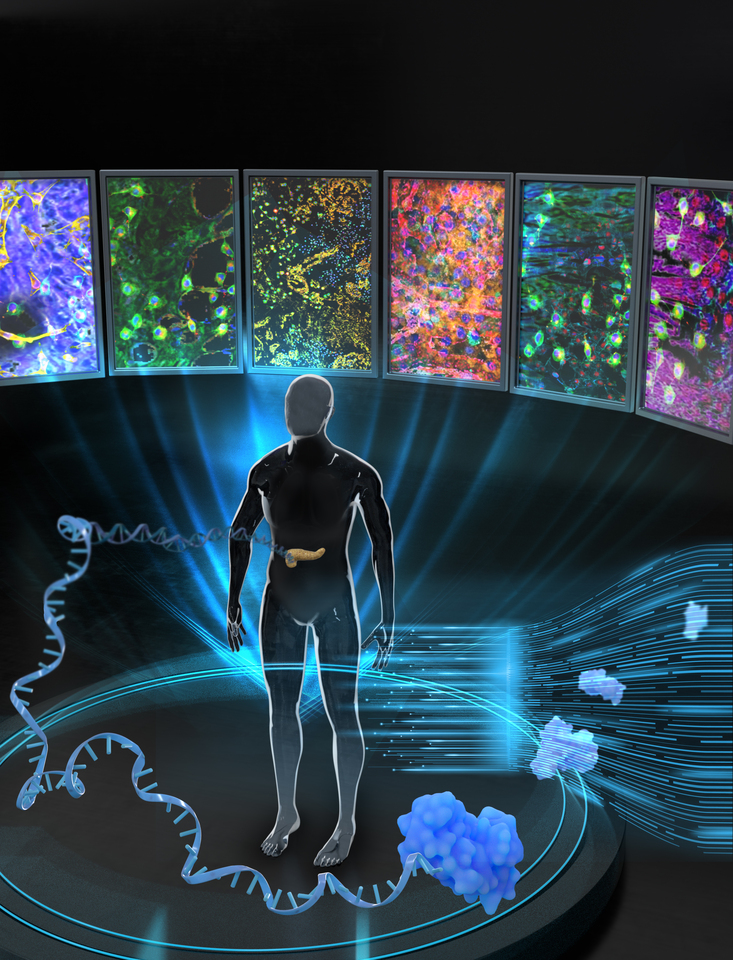