December 2002, RSNA Chicago, at the booth of a thermal ablation device company, two hours after I had presented a novel technique for the very first time:  "Did you see this CRAZY AUSTRIAN INTRODUCING TEN NEEDLES INTO THE LIVER ?" "Yes, I saw him. WHAT THE HELL IS HE DOING?" I stood behind them ...

Percutaneous thermal ablation is a potentially curative treatment method for primary and metastatic liver tumors. Due to its maximal sparing of functional liver parenchyma, low morbidity, and quick patient recovery it seems to be an attractive alternative to hepatic resection (HR). However, due to unacceptable local recurrence rates after conventional "freehand" US- and CT- guided thermal ablation in medium- and large size lesions (> 3 cm), HR is still considered as the first-choice local curative treatment of liver tumors except in minimal subsets of patients. The unsatisfactory results after conventional single-probe thermal ablation is mainly due to insufficient coverage of the tumor by the coagulation zone.

Back in 1994, I joined the "3D navigation group for videoendoscopic ENT surgery" at the Medical University Innsbruck. From that time, we applied stereotactic techniques for many different purposes, including brain tumor biopsy, thermal ablation of the Gasserian Ganglion, fractionated interstitial brachytherapy, drilling of osteochondral lesions, and fracture fixation. However, the most challenging and at once promising application of stereotaxy is thermal ablation because it overcomes the aforementioned problems of conventional "freehand" guidance.

In 2001 we performed the first in man "stereotactic radiofrequency ablation (SRFA)" of a liver tumor 1 by introducing the stereotactic planning, image fusion and guidance principles into the field of thermal ablation. In contrast to the conventional "freehand" single-probe technique multiple probe positions are planned on 3D image datasets in order to cover the tumor by overlapping ablation zones. The whole procedure is performed under general anesthesia using muscle paralysis and respiratory triggering. An optical navigation system is used to adjust an aiming device for precise coaxial needle placement. Up to three radiofrequency electrodes are introduced through the coaxial needles for serial tumor ablation. Immediate fusion of the post ablation contrast-enhanced CT with the planning CT allows for rapid reliable intraoperative assessment of the result.

Figure 1B: Control CT with 15 coaxial needles in place.

Watch the Video (5 min) "SRFA of Liver Tumors" from the Medical University of Innsbruck:

In the meantime, we have treated > 900 patients with > 3000 liver tumors in > 1500 sessions and collected them in our prospective SRFA registry. After bridging therapy with SRFA for liver transplantation, complete histopathological response was found in 183 of 188 treated lesions (97.3%) and in 50 of 52 lesions > 3cm (96.2%) 2. In a recent paper reporting the results after SRFA of very large tumors (> 8 cm) 3  (Figure 1) and in other studies including primary and secondary liver tumors the short- and long-term outcomes after SRFA were comparable to HR.

The current study answers the question (which was already raised in 2002 after presentation of the method and the initial experiences in the first 15 patients), whether the increased complexity of SRFA with placement of multiple coaxial needles (median: 6, range: 1- 50) per session for the treatment of multiple tumors (median: 1, range: 1-18) and large tumors (median: 2.6 cm, range: 1- 18 cm) might affect the post-procedure health-related quality of life (HRQoL). In addition, the results of the post-procedure HRQoL after liver SRFA were compared to other concurrent treatments, such as transarterial chemoembolization (TACE), systemic chemotherapy or hepatic resection. 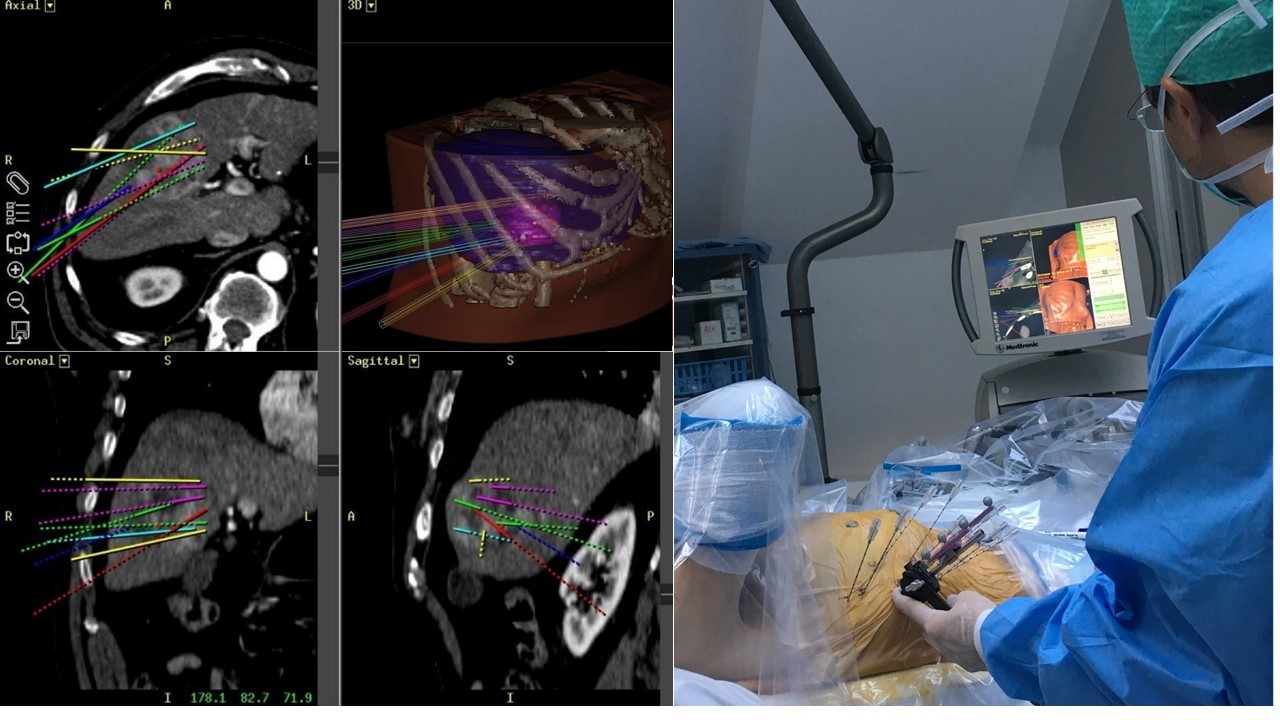