When a normal cell becomes cancerous it tends to grow (proliferate) more quickly. Normal tissues proliferate at different rates however, as do cancer tissues. Here, we were interested in exploring this relationship between cell proliferation in normal tissue versus its tumour at a pan-cancer level.
Nick Tobin
Associate Professor, Karolinska Institute
Follow
Like Liked by Kaisa Cui and 3 others
0

The ideal dataset for this study would have been one with RNA-expression data from hundreds of normal and tumour samples that are paired on an individual patient level. Whilst The Cancer Genome Atlas (TCGA) offers hundreds of cancer samples, the number of those with matching normal tissue is limited. For this reason we chose to combine the pan-cancer TCGA dataset with normal tissue from the Genotype-Tissue Expression (GTEx) dataset. Luckily for us, these two datasets had been reprocessed, normalised and batch-corrected together as a part of the Toil recompute project.

We downloaded this corrected data from UCSC XENA website and performed exhaustive exploratory plots in order to understand if batch effects remained in the dataset owing to them coming from two independent studies. Arian Lundberg and Joan Jong Yi in particular spent approximately 5-6 months on this process which also included the cleaning and annotation of the data. At this stage we noted that when plotting on the basis of the most variable genes across all samples, a long tail of samples stretching into the lower right quadrant was apparent using Principal Component Analysis (shown in Supplementary Figure 1A coloured in red, and Supplementary Figure 1B in the manuscript). Closer inspection of these samples showed all were GTEx normal testicular tissue, indicating a potential study of origin batch effect and as such all normal and cancer testicular samples were removed from further analyses (N = 319).

This long process of exploratory data analysis yielded many different plots and we had a tough time deciding out how to organise them into a coherent figure. Here’s a picture of our early attempts using individually printed plots as jigsaw pieces, this made it easier to re-organise and move around the figures until we were satisfied with a figure that made sense. Other additional positive benefits to this exploratory data analysis process were that it gave us the confidence in the data we required to proceed with the planned project and also helped to defend our work during the review process. Bioinformaticians and biostatisticians often speak to the importance of plotting your data before beginning any analysis and this mantra once again rang true for us in this study.

We were now finally able to plot both datasets together on a single boxplot and place normal and tumour tissue from the same organ/site together. Whilst this figure ended up being quite wide, we knew it was important to show all tissues together to make for easier comparison (Shown below and as Figure 3A in the paper). It's also nice to highlight here that Arian Lundberg made many versions of this with various colour schemes before we finally agreed on this one!

In the remainder of the study we aimed to discern why gynaecological cancer types have the highest BC-CCS levels and were able to partially attribute this to hormonal signalling and gene expression changes (Figures 4 and 5).

People drive projects and in line with this I need to give the majority of the credit for this work to Arian Lundberg who worked tirelessly on the project. Credit also to Joan Jong for initiating the study while in Stockholm for a short-term Bachelor's project, she came to us from Singapore just before Covid-19 hit. Finally, we would like to say a special thank you to the hundreds of scientists who have been involved in the GTEx and TCGA consortia, our work builds on your achievements to date. 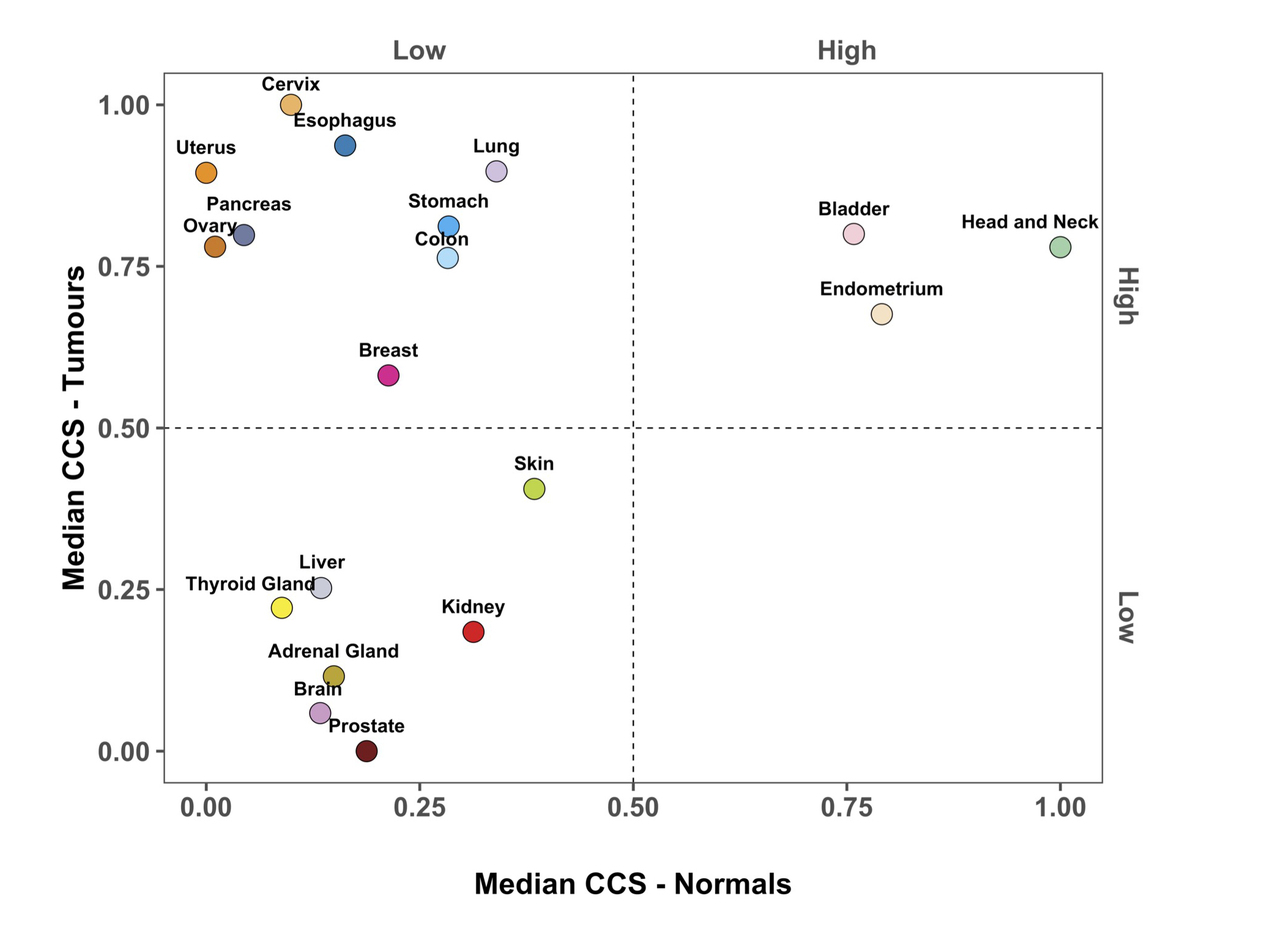 When a normal cell becomes cancerous it tends to grow (proliferate) more quickly. Normal tissues proliferate at different rates however, as do cancer tissues. Here, we were interested in exploring this relationship between cell proliferation in normal tissue versus its tumour at a pan-cancer level.