Alterations of DNA methylation have been recognized as an important component of cancer development. Although tumor cells are characterized by a global decrease of DNA methylation, site-specific hypermethylation is also frequently observed at promoters of tumor suppressor genes, leading to their silencing. For this reason, targeting the mechanisms regulating DNA methylation has been considered as a potential avenue for cancer treatment, and very promising results have been obtained when using the DNA methyltransferase (DNMT) inhibitor decitabine (5-aza-2’deoxycytidine) for treatment of myelodysplastic syndromes. However, the use of decitabine for solid tumors has not been approved yet, due to dose response variations and substantial cytotoxicity.

In this study, we investigated the feasibility of modifying breast cancer (BC) cell metabolism to increase their sensitivity to decitabine. Indeed, DNA methylation relies on the availability of S-adenosylmethionine (SAM), a by-product of the methionine cycle and the principal methyl donor for methylation reactions. Our laboratory has a longstanding interest in BC metabolism with a particular focus on the role of a specific family of metabolic transcription factors: the estrogen related receptors (ERRs) [1].

Given that that we had previously shown that ERRa, the first member of the family, is a key factor in modulating intracellular metabolism in cancer cells [2-4], we thus hypothesized that ERRa might also regulate the expression of enzymes of the methionine cycle in BC cells. In-silico analysis of ChIP-sequencing data combined with wet lab experiments demonstrated that ERRa actually coordinates SAM synthesis with DNMT1 levels of expression. Consequently, targeting ERRa activity altered global DNA methylation. Even more interesting, unsupervised hierarchical clustering of gene expression datasets from cohorts of BC patient tumors showed that DNMT1 mRNA levels positively correlated with ERRa activity, independently of BC subtype.

These results suggested that pharmacological inhibition of ERRa with the specific inverse agonist C29 [5] could potentiate the antitumor effect of decitabine on BC cells, an approach that was confirmed both by in-vitro experiments as well as xenografts in NGS mice. However, while both C29 and decitabine could reduce DNA methylation levels on their owns, we were quite surprised to notice that combination of both did not further accentuate this phenotype.

We thus conducted reduced representation bisulfite sequencing (RRBS) to characterize CpG methylation in each condition and eventually identify tumor suppressor genes that could be re-expressed upon co-treatment. This is how we discovered that the promoter of IRF4, a transcription factor involved in hematological cancers [6], is heavily methylated in many types of cancer. In BC, we observed that IRF4 promoter hypermethylation led to its silencing and decitabine and C29 collaborated to restore IRF4 expression, which displayed a tumor suppressive effect and impaired tumor growth.

We believe this study, now available in Oncogene, to be an ideal proof of concept that altered metabolism is an Achilles’ heel of tumor cells that can be exploited to discover new therapeutic approaches to fight cancer development. 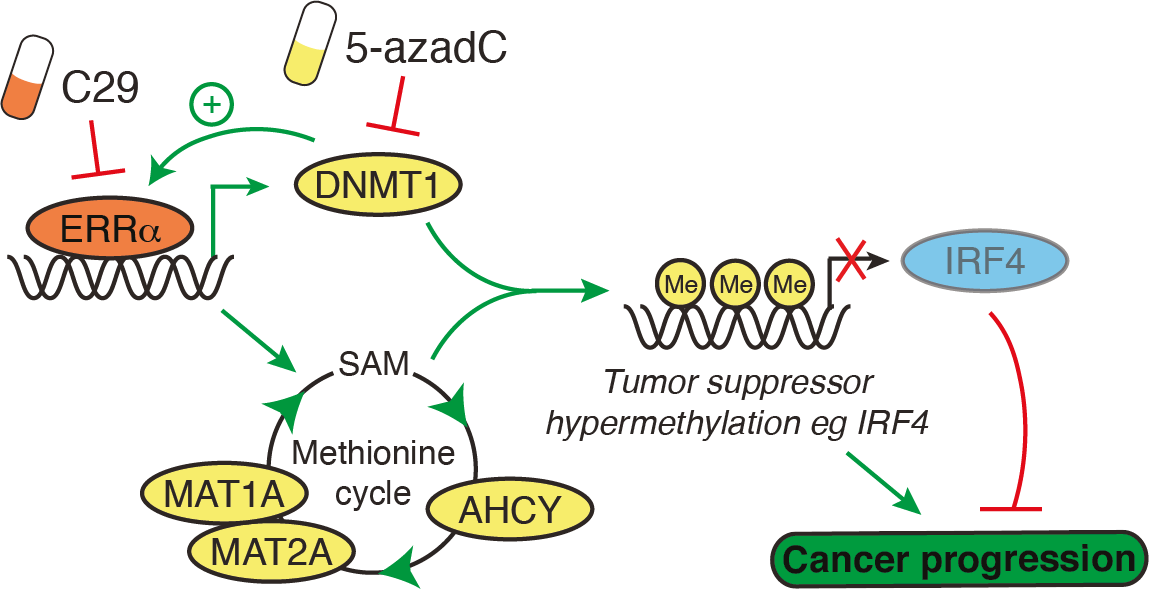