Uveal Melanoma is the most common primary intraocular tumor in adults with the median age of diagnosis between 59 to 62 years in the United States and Europe1-3.  A relatively rare disease, Uveal Melanoma frequently metastasizes to the liver (89%) and is associated with high mortality rates4.

The intrahepatic space is inherently tolerogenic and immunosuppression within the liver may be further exacerbated in the setting of malignancy5-8. Myeloid-derived suppressor cells (MDSCs), a frequent suppressive cell type in liver metastasis, are a heterogeneous population of immature myeloid-cell progenitors that suppress anti-tumor immunity and have the capacity to differentiate into mature granulocytes, macrophages, or dendritic cells. Importantly, liver MDSCs may be programmed differently compared to other organs5, 7-9. The suppressive nature of the intrahepatic immunologic milieu is further driven by liver T cells through production of cytokines that may promote immunosuppressive programming10.

While novel combinatorial immunotherapy treatments have shown great promise in a variety of cancer types, success for patients with liver metastases has been limited. To achieve better outcomes in liver metastasis patients, novel approaches to favorably reprograming the tumor microenvironment (TME) may be needed to drive consistent responsiveness to immunotherapy.

Toll-like receptor (TLR) agonists play a key role in initiating a cascade of innate and adaptive immune responses11. TLR9 agonists activate dendritic cells, B cells, and macrophages, while upregulating inflammatory cytokine pathways12. This initiates a range of secondary effects which include activation of natural killer cells, and expansion of Th1 and cytotoxic T lymphocytes.

TLR9 agonists have the potential to transform “cold” tumors with low immune infiltrates to “hot” tumors with high tumor infiltrates, which may be required for improving responsiveness to checkpoint inhibitor (CPI) treatments15, 16. For example, cutaneous melanoma patients with CD8+ T cells at the invasive margin of the tumors at baseline responded to the anti-PD1 antibody treatment18. Agents that enhance infiltration and functional activation of T cells and antigen-presenting cells in tumors have the potential to improve responsiveness to CPI treatment. In a murine subcutaneous tumor model using CT26 colon carcinoma cells, intratumoral injection of SD101, a TLR9C agonist, in combination with anti-PD1 treatment led to complete remission of all injected tumors and a majority of uninjected tumors19.Intratumoral SD101 treatment led to rapid infiltration and expansion of CD8+ T cells causing a durable anti-tumor efficacy in virtually all animals19.

TLR9 agonists have also shown clinical activity and are well tolerated when delivered by direct needle injection into superficially located tumors20.  Systemic delivery of TLR9 agonists can be challenging and direct needle injection is not feasible in patients with multiple, deep visceral tumors. Intravascular delivery of immunotherapy agents into liver tumors using Pressure Enabled Drug DeliveryTM (PEDDTM) has the potential to improve the clinical performance of the drugs. PEDDTM technology is designed to modulate intravascular pressure and reduce off-target toxicity.

In our pre-clinical study, we used the TLR9C agonists ODN2395 and SD101 to determine whether they can reshape the TME to overcome the highly immunosuppressive environment of liver tumors to enhance the anti-tumor efficacy of systemically infused CPIs such as anti-PD-1 agents.

Regional intravascular delivery of TLR9C was performed in a murine liver metastasis model via portal vein with a murine model of PEDDTM. In a separate clinical study, using PEDDTM approach and its associated SmartValveTM technology, enhanced response rates in treating hepatocellular carcinoma by improving the delivery of drug-eluting microspheres21. The ability of PEDDTM to modulate pressure and improve delivery has been further confirmed in an orthotopic pancreatic cancer mouse model22. In prior preclinical studies using the murine model of PEDDTM, the delivery of CAR-T cells and CPIs for treating liver metastasis, was also explored6, 23.

As MDSC are an important component of TME immunosuppression in the liver, we examined the ability of Class C TLR9 agonists to eliminate or modulate this cell type. In our study, by using human peripheral blood mononuclear cells (PBMCs) we demonstrated that Class C TLR9 agonists (ODN2395 and SD101) reduced the expansion of the MDSC and enhanced M1 macrophage polarization.

The study also demonstrated that TLR9C agonists could dampen MDSC-mediated immunosuppression in liver metastasis in vivo using the murine model of PEDDTM, ultimately improving the anti-tumor efficacy of CPIs in mice with established liver metastases.

Regional delivery of the TLR9C agonist, SD101, using the PEDD approach is presently being studied in clinical trials for uveal melanoma with liver metastases (NCT04935229) and primary liver tumors (NCT05220722), to evaluate the potential to overcome the liver’s immunosuppressive environment that currently limits responsiveness to immunotherapy. 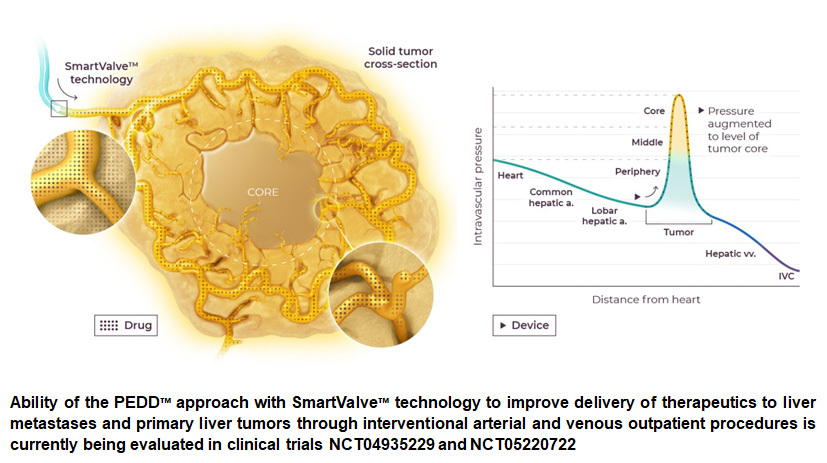