We took up a challenge which has been asked of the radiation oncology community in the era of personalised medicine: 'Why so challenging to personalize radiation dose?' . Gene expression signatures are increasingly available and are used to guide systemic therapy options, but before being introduced into the radiation oncology clinic, we asked whether any gene expression signatures of radiosensitivity added value over and above clinico-pathological variables? We selected oropharynx cancer, which is rapidly increasing in incidence in fit, otherwise healthy patients, and for which de-escalation would be beneficial to spare side effects of treatment and improve quality of life. Furthermore, in this subsite, immunohistochemistry for the cell cycle marker p16 (a surrogate marker of infection with HPV) is an excellent surrogate biomarker of radiation response, so we would have a 'gold standard' to compare to - this doesn't exist for many subsites treated primarily with radiation therapy. Oropharynx squamous cell cancer is relatively rare, with few large cohorts, so we collated multiple publically-available datasets and then compared the gene expression signatures in a curated TCGA dataset.

At the time we designed the project, the American Joint Committee on Cancer (AJCC) and Union for International Cancer Control (UICC) staging systems did not well capture prognostic information: most patients with oropharynx cancer were classified as Stage IV due to nodal disease, but there was heterogeneity of patient outcome, as patients with HPV-associated oropharynx cancer have a much improved prognosis compared with HPV-negative cancers. Now, the latest versions of the staging systems incorporate p16.

Our pragmatic literature review identified 16 relevant mRNA gene expression signatures of radiosensitivity, as well as HPV status, tumour hypoxia, and microsatellite instability (these latter factors being important confounding variables). We also tested POLQ and MRE11, as these had been previously published to be associated with radiosensitivity. We quality tested signatures using a novel sigQC methodology, and added signatures to clinico-pathological variables as predictors of survival, in univariate and multivariate analyses.

We found that, as expected, AJCC 7 Stage was not predictive of recurrence-free survival (RFS) or overall survival (OS). In contrast, AJCC 8 significantly predicted RFS and OS. Gene signature quality was highly variable. Among HPV-positive cases, signatures for radiosensitivity, hypoxia, and microsatellite instability revealed significant underlying inter-tumour biological heterogeneity, which is in keeping with emerging clinical data suggesting not all patients can have safe treatment de-escalation. However, the gene expression signatures did not show prognostic significance when adjusted for clinical covariates (albeit sample size was small). Thus, further work is required to tease out clinically-useful markers for HPV-positive oropharynx cancer patients to enable safe treatment de-escalation.

Surprisingly, among HPV-negative cases, a gene signature for HPV status was predictive of survival, even after adjustment for clinical covariates. Many genes in the signature are related to cell cycle and its regulation. This is hypothesis-generating, particularly for basic radiobiology, and would also be interesting to examine in other subsites for which markers of radiosensitivity are more limited than oropharynx.

Finally, across the whole series, several gene signatures representing HPV and microsatellite instability remained significant in multivariate analysis. However, quality control and independent validation are required for this group of cancers to add prognostic information above recently improved clinico-pathological variables, due to issues with heterogeneity and reproducibility. 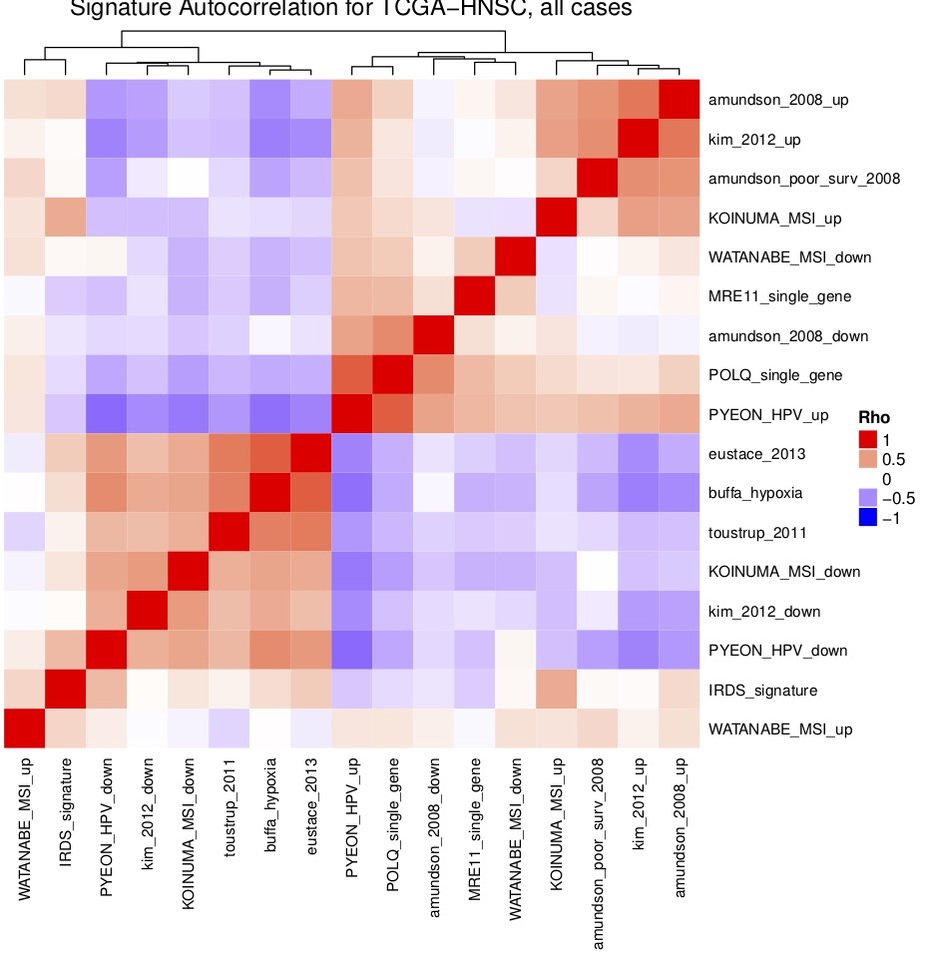