Triple-negative and other breast cancer subtypes commonly carry genetic alterations in the tumor suppressor p53, while the tumor status of p53 is largely ignored in the clinical decision making 2. Decades of research implicate p53 in response to DNA damage and a breadth of information is available on the functional consequences of p53 mutations 2. However, therapeutic efforts targeted to mutant p53 have been rather unproductive. A small proportion of TNBCs (<10%) are deficient for homologous recombination (HR) and intrinsically sensitive to inhibitors of poly (ADP-ribose) polymerase (PARP) 3. Yet, the majority of TNBCs do not respond to PARP inhibitor (PARPi) due to lack of mutations in HR-related genes or acquired resistance to PARPi.

Our study published in the Communications Biology revealed that p53 mutant cancers express high levels of the Base-Excision Repair (BER) genes, whereas experimental testing showed substantial dysregulation in BER 4. This defect resulted in accumulation of DNA damage in p53 mutant cells upon treatment with deoxyuridine analogues. Furthermore, PARP inhibitors greatly enhanced DNA damage increasing amounts of double-strand breaks, while normal cells responded with activation of the p53-p21 axis and cell cycle arrest. Based on these findings, we developed a combination therapy strategy incorporating deoxyuridine analogues and PARPi to selectively target p53 mutant cancer.  Preclinical testing in metastatic TNBC models revealed high efficacy of the drug combination therapy compared to each drug alone, with no increase in toxicity in mice.

Our study illustrates a new concept employing the inducer (deoxyuridine analogue) – amplifier (PARPi) strategy to achieve selective synthetic damage to p53 mutant tumors, while limiting impact on non-tumor tissues. Notably, this new drug combination expands clinical application of PARP inhibitors to nearly half of breast cancer patients, while as monotherapy their application is limited to HR-deficient cancers. Importantly, our preclinical data argue that this new strategy has broader implications, since nearly half of all human cancers carry p53 mutations. Exciting news is recent opening by our team of a clinical trial (NCT04511039) testing this new drug combination in patients with colorectal and gastric cancers. Thus, our basic research may impact the treatment paradigm in the very near future. 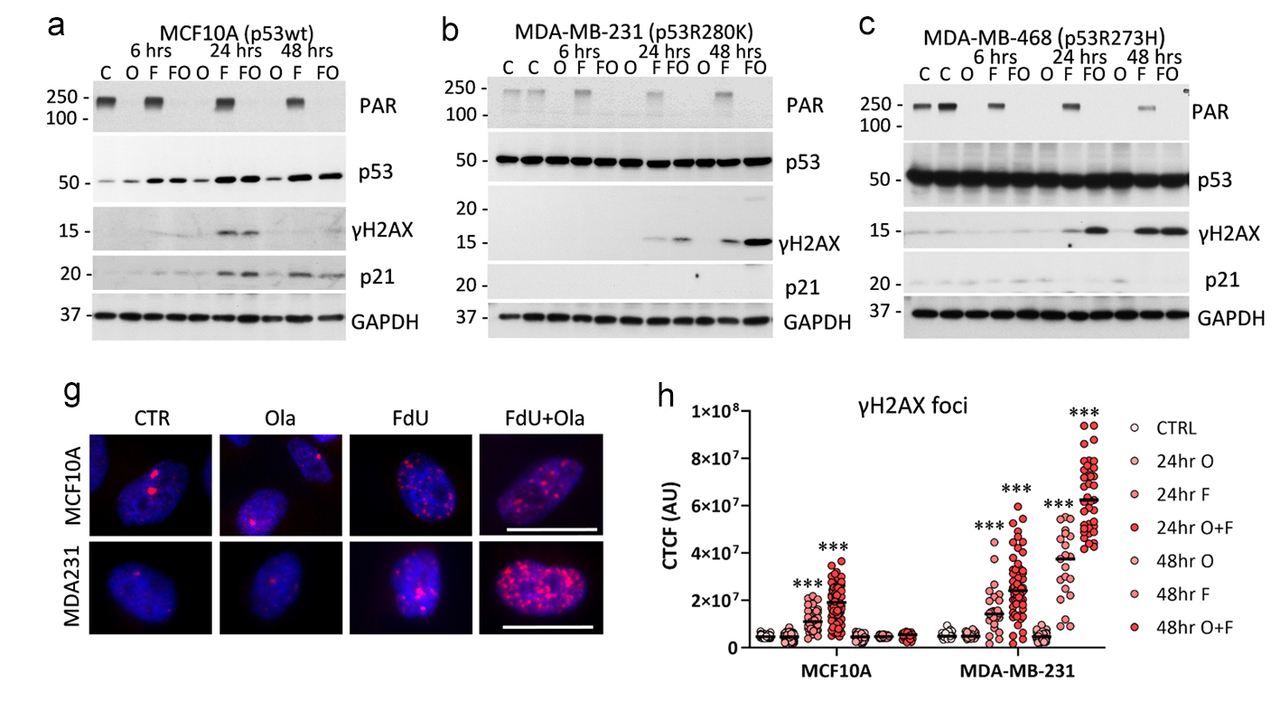