“Ultimately, to elucidate the epigenetic phenomenon of cellular memory during development, we need to understand how the activity state of a gene is reproduced in daughter chromatids following replication of its DNA”.

Nearly four years ago, bearing this rather simple task in mind (taken from one of S. Henikoff’s gem reviews1), I was joining up the group of Amos Tanay in Weizmann. It was a good time to join: The lab, studying the dynamics of DNA methylation for some years already, has just confirmed that imperfect DNA-methylation maintenance can generate errors (“epi-mutations”) that are clonally transmitted (just as genetic mutations) in somatic cells2. One standing question was however - what could be the consequences of such epi-mutation, if any at all. We decided to address this in cancer cells, where we knew clonallity plays a role due to accumulation of genetic mutations. Can epi-mutations do the same? We were fortunate to have single-cell (and low input) RNA-seq and DNA-methylation protocols emerging in our wet lab (led by Zohar Mukamel) at that time. Happy days.

Inspired by the classic Luria and Delbrück experimental scheme, we hypothesized that if epi-alleles propagate similarly to genetic alleles, then we can capture their impact on gene expression by comparing distributions of single-cells to those of multiple clones deriving from them. From each single-cell derived clone (~ 500 cells in each), we planned to extract both transcriptome and methylome, and utilize the L&D scheme to distinguish between transient and clonal signatures (as graphically illustrated below). Then, we hoped to test whether specific (stable) epi-alleles associate with a particular (stable) transcriptional output.

As a true nihilist, I was expecting negative results. What would be more friendly to the cosmos than to illustrate that after all, DNA methylation changes are only mirroring those “really important” events occurring in cells? With this in mind, I became for a while an integral part of the hood in our tissue culture room. Timed cycles of trypsinization and pipetting elongated to a couple of 20 hours sessions, which resulted in beautiful transcriptome and methylome profiles of hundreds of short-term clones from several cell lines. Turn out my nihilism had to be reconsidered – there was rich epigenetic and transcriptional structure in the data, not what one expect from simple cancer cell lines. More than that – our genomics analysis showed most of this structure cannot be explained by hidden genetic subclones.

The paper discusses several dimensions in which transcriptional and epigenomic memory can be identified in our single cells and clones. We found methylation at enhancers and promoters in colon cancer cells to be inversely correlated with expression of clonally stable epithelial/EMT genes. Specifically, we found a distinct EMT-like stable molecular state that is characterized both by high expression of Vimentin and with severe global hypomethylation. These observations indicated, once again, that the epigenome is correlated with transcription, but we thought that if we find very strong and specific link between the two, it may serve as a good candidate to be causal as well. In a genome-wide screen, we identified a subset of genes that that were rarely de-repressed in one or few clones (out of 300), but completely repressed in all others. We call these GEMINIs (Genes that Escaped Mitotically INherited Inhibition). Promoters of GEMINIs are natively methylated, and in those clones where they are de-repressed, we also see 50% reduction in methylation. This is just what you can expect from a gene that lost methylation and became de-repressed in one allele. Yet another intriguing, notable and striking… correlation. But we also showed that half of the GEMINIs were de-repressed in double knock-out (DKO) clones where DNA methylation is acutely impaired. So the assay is suggesting that GEMINIs carry epigenetic memory and that methylation is required to maintain it.

GEMINIs represent one very specific type of non-genetic clonal memory we observed. But the effect, as described in the paper is much more pervasive, and involve a broad spectrum of transcriptional and epigenetic states that correlate with key processes such as epithelial to mesenchymal transition and change slowly with time (Blog Figure 3).

This allows for new speculations on one of the oldest epigenetic puzzles, which is potentially very relevant to understand cancer - “In the context of somatic cells, is DNA methylation functional?”

More than 40 years since this question first echoed on this planet, can we say in 2020 that DNA methylation is a carrier of epigenetic memory? I would be delighted to first argue against it: Ultimately, in order to transmit a message – it should communicated intact over generations! But as our clones show, much of the cells’ DNA methylation mark-up is not copied to daughter cells. Second, we show here that cells with almost no DNA methylation are able to transmit a quantitative spectrum of transcriptional identities. Third (promise to stop here), non-genetic memory could be in principle implemented by gene regulatory networks, chromatin structure and even chromosomal topological domains. Why setting up a whole enzymatic festival just to have another mechanism? Flies and worms are doing just fine without it.

On the other hand, if one is willing to accept DNA methylation as a quantitative modulator for the quality of transcriptional memory in cancer and not as its sole driver, “mildly” functional methylation may appear much more likely. In our clones and in numerous other systems, methylation at promoters and enhancer elements correlate pervasively with transcription. Even if these are all secondary epigenomic responses to other driving regulatory mechanisms, such secondary changes can become important. This depends on a) the ability to stably copy these methylation changes from mother to daughter cells, and b) the effect of specific hypo- or hyper-methylation on the regulatory potency of the locus. Our clones survey shows the answer to both a) and b) is rarely positive – the random CpG next to you is likely to be either unstable or functionally meaningless. But the data also suggest there are enough “cold” and “functional” CpGs out there – you just have to distinguish them from the highly stochastic and noisy background. And there will be more such CpGs if the epigenetic machinery itself is perturbed – which seems to be often the case in cancer.

So taken together, my subjective answer to this question at the moment would be “DNA methylation is usually not a carrier of functional epigenetic memory in somatic cells”. But in biology “no” is not “never”, and in specific contexts, the accumulated impact of multiple epi-mutations with weak effects may have functional consequences. Essentially, this is not very different from the way classic models explain how genetic mutations drive cancer – the large majority of them are completely neutral, few can have minimal (combined) effects, and only much fewer (in a very specific context) can lead to cancer. Our work suggest epi-mutations are added on top of these classic genetic models (and not instead of them), to diversify clonal states in cancer. It is possible that in specific contexts of cancer biology, epi-mutations have more pronounced functional consequences. For example, they could provide partial explanation for rapid evolution of tumors, which could not simply explained by slowly accumulated genetic mutations, i.e., following treatment or immune interactions. 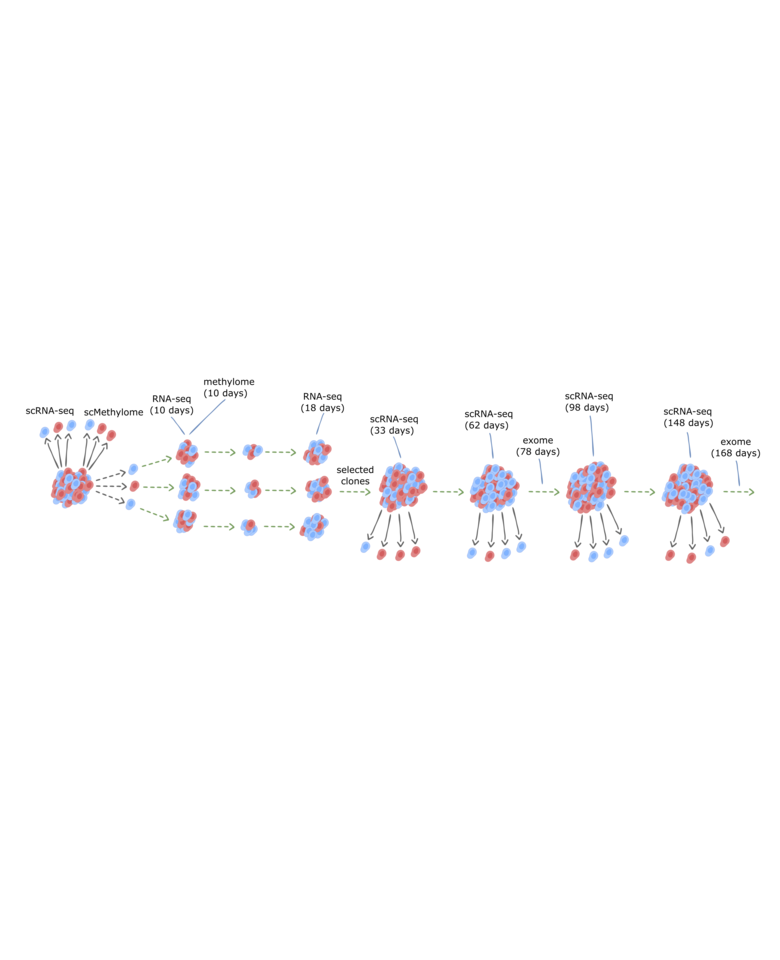