Liver cancer is the second leading cause of cancer deaths worldwide; hepatocellular carcinoma (HCC) accounts for 75-85% of these cancers. The 5-year-survival rate of HCC is only 18%, we think it is very important to understand the signaling pathways that are involved in its initiations.

Sirtuins are a class of proteins that have NAD+ dependent deacetylase activity or ADP-ribosyl transferase. Numerous studies have shown that these proteins hold important roles in the cellular processes of aging, apoptosis, and inflammation. They also signal molecules to undergo multiple roles in metabolism. SIRT1, the leading members of this family, plays important roles in orchestrating energy metabolism and cellular stress. Using a genetic mouse model, Wang et al have demonstrated that SIRT1 may act as a tumor suppressor through its role in DNA damage response in genomic integrity1.

Thus, we studied the role of SIRT1 in the initiation of HCC induced through diethylnitrosamine (DEN) treatment in wild type (WT) and liver specific Sirt1 knockout (Sirt1 LKO) mice. We observed that the Sirt1 LKO mice had fewer tumors compared to the WT control mice. This was not related to intracellular damage level caused by DEN. Next, we decided to study the extent of DNA damage by gH2AX phosphorylation due to SIRT1’s role in promoting DNA double-stranded break (DSB) repair. Contrary to our hypothesis, WT mice exhibited more DNA damage initially in comparison to their Sirt1 LKO counterpart. Of note, hepatic inflammation and pro-inflammatory cytokines did not show significant correlation with hepatocellular carcinoma phenotype in Sirt1 LKO mice.

We then wondered if the redox environment in Sirt1 LKO mice diminished the impact of DEN. The loss of SIRT1 resulted in a higher synthesis of glutathione through an elevated expression of Gclc, a gene responsible for GSH synthesis. Sirt1 loss also seemed to be upregulating the expression of Gstm1, 2, 3, 4, and 5 genes. GSH/GSSG levels and total GSH were higher in the DEN treated livers of the Sirt1 LKO mice compared to WT mice.

Following the lead of glutathione metabolism, we also found that Sirt1 LKO mice contain higher expression and activity of NRF2 (nuclear factor-erythroid 2-related factor2). NRF2 is regarded as the master regulator of oxidative stress, a process primarily affected by glutathione metabolism. By performing Nrf2 knockdown in Sirt1 knockout cells, we demonstrated that the expressions of Gsta1, Gstm1, and GSTm2 were reduced upon NRF2 reduction. Thus, it is evident that elevated levels of NRF2 in Sirt1 knockout cells increased the transcription of glutathione pathway genes.

Increased ratio of GSH/GSSG provides an reductive environment for hepatocyte of Sirt1 LKO mice to battle the oxidative stress introduced by DEN. At the same time, the role of NRF2 has been reported in the facilitation of DNA damage repair; its loss increases DNA damage by impairing DNA damage repair pathways mediated by ATM and ATR. It is plausible that the elevated level of NRF2 may have protected Sirt1 LKO mice from DNA damage via upregulating the ratio of GSH/GSSG and affecting ATR/ATM function. We observed that the loss of Sirt1 alone reduced DNA damage, while this effect disappeared in Sirt1 deficient hepatocytes upon NRF2 knockdown. Pretreatment of WT mice with NAC (N-acetylcysteine), an acetylated precursor of reduced glutathione, showed an inhibitory effect on HCC formation if the treatment was started at 1 month of age, i.e. the time that HCC is getting initiated. No significant change was observed when the treatment was initiated at 5 months of age, i.e. at the time that HCC has been initiated for 4 months.

Deficiency of Sirt1 prevents HCC initiation through upregulation of Nrf2 and maintaining the extracellular redox environment in hepatocytes.

In conclusion, this study clearly supports the oncogenic role of SIRT1 in hepatocellular carcinoma initiation induced by DEN treatment. The activation of NRF2 in HCC patients with lower levels of SIRT1 may result in clinical therapeutic efficacy. However, this treatment has a protective effect only if it’s used early, not a curative one. Further research must be conducted to provide more effective information for treating HCC patients. 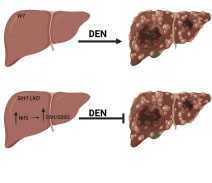