The poor prognosis of ALK- ALCL and the high frequency of ALK+ ALCL relapse demonstrate the unsatisfying efficacy of the current treatment regiments and reveal the need for novel prognostic biomarkers.
Cosimo Lobello
PhD , CEITEC Masaryk University
Follow
Like

Next-generation sequencing (NGS) has improved genetic characterization in oncology thus becoming a useful tool in both, diagnostics as well as in clinical applications1. Thanks to NGS, we have more information about the genetics landscape of systemic anaplastic large cell lymphoma (ALCL), including recurrent mutations2, as well as frequent chromosome aberrations2–4. Despite this, prognostic value of these aberrations is still poorly understood. Systemic ALCL is a rare and aggressive T-cell non-Hodgkin’s lymphoma which the WHO recognizes as two distinct clinical entities5: anaplastic lymphoma kinase (ALK) positive (ALK+) and negative (ALK-), which are characterized by either the presence or absence of an ALK translocation protein. The current front-line treatment follows multi-agent chemotherapy regimens that provide a good response for ALK+ ALCL, with a 5-year overall survival (OS) of 70-80%6,7; although more than 20% of patients relapse8,9. ALK- ALCL patients demonstrate a worse prognosis with the 5-year OS being 40-45%10,11. Since the current first-line chemotherapy treatments yield unsatisfying results, a better molecular understanding, leading to improved prognostic biomarkers for risk stratification, patient management, as well as novel potential therapeutic targets, is required.

In our recent publication in Leukemia, we aimed to fill in this gap by investigating the mutational status of 275 cancer-related genes in a cohort of systemic ALCL patients (47 ALK+ and 35 ALK-). This cohort represents one of the largest cohorts of systemic ALCL patients ever sequenced. Within our cohort, the most frequently mutated gene was TP53. Interestingly, previous publications have reported this gene to be rarely mutated in systemic ALCL (< 10%), although these previous studies employed outdated techniques12,13. Herein, for the first time we report a high percentage of patients harbouring mutations within the LRP1B gene, with a prevalence in ALK+ patients. STAT3 and JAK1 were solely mutated in ALK- ALCL and were the most frequently mutated genes in this group. Recurrent mutations were detected in epigenetic modifier genes such as KMT2D, CREBBP, TET2, EP300 and KMT2C; these genes are also often mutated in breast-implant associated (BIA)-ALCL14.

The main aim of our work was to investigate the genetic mutational landscape in ALCL and therefore to unravel the possible association between mutated genes and patient outcome. With this regard, we report for the first time the association of mutations in STAT3 gene with shorter OS in ALK- ALCL patients (HR = 4.1; 95% CI, 1.56-10.71, p < 0.002).

Moreover, we sequenced and compared tumour samples at two different time points, at diagnosis and relapse. This investigation provided information about the clonal evolution in ALCL. We demonstrated the persistence of the major clone at diagnosis as well as at relapse, with high frequency of mutated TP53. From the prognostic point of view, we report the association of TP53 mutations with shorter PFS (HR = 3.3; 95% CI, 1.59-6.87, p < 0.0007). Comparing samples at these two stages also reveals newly acquired mutations in the EPHA5 gene, which might serve as a prognostic biomarker in the future.

In summary, these data provide new insights into the genetic mutational landscape of systemic ALCL, highlighting the association of mutations in STAT3 and TP53 which correlate to a dismal prognosis. Furthermore, these data might hold translational significance, with respect to prognosis, by determining the mutational status of these genes at the diagnosis. We provide new candidates (such as LRP1B, EPHA5, KMT2D, PRDM1 and SOCS1) which should be taken into consideration in future studies that aim to further the understanding of systemic ALCL pathogenesis. The suitability of these gene products as therapeutic targets also remains promising avenues of research. 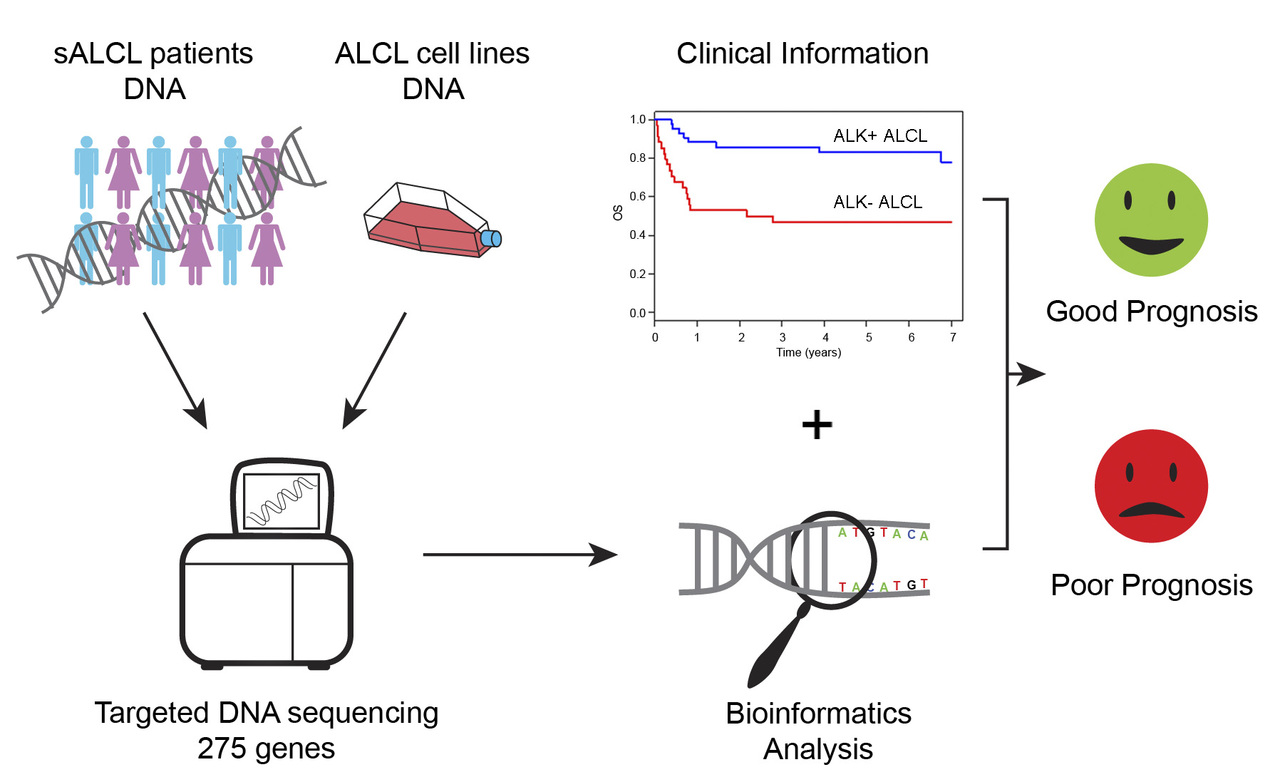 The poor prognosis of ALK- ALCL and the high frequency of ALK+ ALCL relapse demonstrate the unsatisfying efficacy of the current treatment regiments and reveal the need for novel prognostic biomarkers.