Germline predisposition plays an integral role in the diagnosis and management of patients with hematopoietic malignancies. One of best-known conditions predisposing to myelodysplastic syndromes (MDS) is GATA2 deficiency, a Mendelian disorder with autosomal dominant inheritance caused by germline heterozygous mutations within the GATA2 gene [1]. In children with MDS who have monosomy 7 karyotype, GATA2 deficiency is found in 1/3 of cases, and increases with age affecting 2/3 of adolescents [2]. Thus far, the following types of pathogenic mutations, resulting in haploinsufficiency of GATA2, have been reported: null (~50%), missense (~30%) and intronic regulatory variants (~10%) (Figure 1). Even though this disease is relatively well characterized, we are encountering in our daily practice patients with GATA2 phenotype, yet without known genetic cause.
One of such examples was a family seen at our institution with two daughters, one diagnosed with MDS, refractory cytopenia of childhood (MDS-RCC) and the other presenting with mild B- and NK- lymphopenia. Their mother suffered from immunodeficiency and lung disease compatible with GATA2 deficiency, and died of severe infection [3]. In all of them, identical synonymous GATA2 single nucleotide variant (SNV) was identified. Our basic understanding about synonymous SNVs is that they leave the amino acids unchanged. Therefore, they are widely considered as benign and routinely filtered out from genomic studies. However, several recent studies uncovered the detrimental effect of such synonymous SNVs on gene processing and function, which did increase our awareness about their role in human disease [4-6].
The synonymous change found in our index patient was associated with loss of RNA expression of the mutated allele. That first hint pointing at deleteriousness of synonymous GATA2 mutations triggered the analysis of a large cohort of childhood MDS and pediatric “ICUC” (idiopathic cytopenias of unknown cause) within the European Working Group of Childhood MDS (EWOG-MDS). We detected in total 9 cases with 5 unique synonymous substitutions. Decrease or complete loss of mutated RNA was observed for all the variants. Quantification of GATA2 variant allelic frequency in total RNA vs mature mRNA, indicated that mutated transcripts are lost during late stage of RNA processing, presumably due to destabilization. Fascinated by this finding, we then applied different methods to better understand the mechanism. This led to the finding that one of the recurrent mutations (c.351G>A, p.T117T, found in 4/9 patients) introduces a new splice donor site which then utilizes multiple alternative acceptor sites. This results in new transcripts with premature stop codon undergoing nonsense-mediated decay and ultimately leading to reduction of protein. Further in vitro analysis revealed slightly increased protein stability associated with another mutation (c.649C>T, p.L217L) which also demonstrated altered phenotype in zebrafish. For the remaining 4 variants, although not experimentally assessed, the likely underlying cause is RNA instability.
Our data brings us one step closer to the understanding of a new mechanism resulting in GATA2 deficiency and indicates that combined approach of DNA and RNA sequencing in patients with apparent phenotype, yet no genetic cause may reveal the “hidden” genetic underpinnings of GATA2 deficiency. Besides, it supports the need of incorporating the analysis of synonymous SNVs into routine diagnostic pipelines for other monogenic Mendelian diseases.

Figure 1. Presentation of the 4 most common types of germline GATA2 mutations identified in our cohort. Typical localisation for each mutation type is denoted with colored bars. Apart from well-known null, missense and intronic variants, we introduce a novel class of pathogenic synonymous SNVs. GATA2 isoform: NM_032638.5; not scaled. 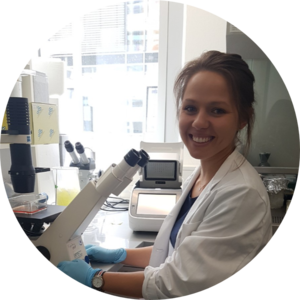 +2
Esteban Ballestar and 2 others
Ruxolitinib discontinuation syndrome: incidence, risk factors and management in 251 patients with myelofibrosis
Contributor Blood Cancer
Behind the paper

Dilara Sahin
Nature Research Cancer Community
We use cookies to help improve your experience. By continuing to browse our website you are consenting to our use of cookies.
Learn more