Expression of the bicarbonate transporter SLC4A4 in pancreatic cancer cells promotes immune escape and resistance to immunotherapy.
Federica Cappellesso and Massimiliano Mazzone
2 contributors
Like Liked by Evelina Satkevic and 1 other
0

Mazzone and colleagues identify the bicarbonate transporter SLC4A4 as highly abundant in epithelial duct cells in pancreatic cancer and show that its inhibition mitigates acidosis in the tumor, thereby alleviating immune suppression and overcoming immunotherapy resistance.

Where did we start?

Tumors generally show a prominent decrease in the interstitial pH as compared to healthy tissues reaching values as low as 5.6 1. This is particularly true in the case of pancreatic adenocarcinoma (PDAC), one of the most aggressive and lethal cancer types, where conventional therapies and the most recent immunotherapeutic approaches have failed to provide patients with a promising treatment option 2. This tumor type is characterized by a dense desmoplastic stroma that impedes oxygen and nutrient diffusion from the blood stream and contributes to a strong hypoxic and acidic tumor microenvironment (TME)3. Under physiological conditions, the pancreatic enzymes, secreted by the acinar cells, require an alkaline milieu for proper function; hence, bicarbonate is secreted by epithelial ductal cells against a 7-fold concentration gradient4. It follows that bicarbonate transporters could represent a valid target to ameliorate the acidic pH of the TME; however, their role remains largely unexplored.

Based on this hypothesis we aimed to study the role of bicarbonate transporters in the progression and in the control of the immune response in PDAC. In particular, we focused our project on the most and selectively expressed transporter in pancreatic ductal cells, namely Solute Carrier Family 4 Member 4 (SLC4A4). Contrasting evidences have proven that the reduction of SLC4A4 expression can both prohibit and promote cancer cell proliferation and migratory traits in vitro or in immunodeficient contexts, largely depending on the tumor cell type 5–8. Nevertheless, till date, there are no in vivo studies that have examined SLC4A4 as a modulator of tumor pH and anti-tumor immune responses in pancreatic cancer. In this work, we explored the metabolic effects within the TME of Slc4a4 deletion in the cancer cell compartment and the impact of these modifications on tumor growth, anti-cancer immunity and response to immunotherapy in mouse models of PDAC.

What did we discover?

By single-cell RNA-sequencing analysis in PDAC patients, we identified SLC4A4 as the most abundant bicarbonate transporter, predominantly expressed by epithelial ductal cells. In vitro and in vivo analyses showed that SLC4A4 contributes to the modulation of extracellular pH (pHe) during PDAC progression. The inhibition of this transporter impedes the uptake of bicarbonate by cancer cells leading to its accumulation in the extracellular space and, thereby, increasing the pHe. Despite pH is often assumed but not always measured in vivo, in this study we were able to confirm our in vitro findings and using MRS technology we showed that Slc4a4 targeting in cancer cells ameliorates the acidity of the TME. The intracellular buffer ability of SLC4A4-deficient cells was also reduced, resulting in a lower intracellular pH (pHi) which we linked to a decrease in glycolysis that, in turn, contributes to further ameliorate the pH of the extracellular milieu through reduced lactate production and, consequently, its reduced export coupled with protons. On the contrary, it is likely that SLC4A4 proficient cancer cells are able to preserve an optimal pHi by sustaining bicarbonate import and thus preventing acidosis-dependent glycolysis inhibition9–11. In this way cancer cells install a loop in which bicarbonate sequestered from the extracellular space not only reduces the pHe, but also favors glycolysis and consequently, lactate accumulation and secretion which, in turn, further decreases the pHe. Through this mechanism PDAC cells maintain and fuel an acidic TME.

Tumor acidity is emerging as a key driver of cancer progression since it can favor the selection of malignant cancer cells and, at the same time, can affect the composition and function of stromal cells present in the TME1,12. Several studies have reported that, when exposed to high levels of lactate or to a low pH environment, T and NK cells become dysfunctional in favor of the expansion of immunosuppressive myeloid cells and regulatory T cells13,14.

Acidification of the TME sustained by SLC4A4 activity blunts the effectiveness of a proper anti-tumoral CD8+ T cell response.  In fact, SLC4A4 targeting in cancer cells not only led to a stronger activation and cytotoxic activity of CD8+ T cells, but also promoted their infiltration into the core of the tumor, converting a cold and poorly infiltrated malignancy into a hot and immune-responsive tumor.  Our data show also that SLC4A4 targeting installs a pro-inflammatory and less immunosuppressive macrophage phenotype only in concomitant presence of T cells. The evidence that a decrease in lactic acid or, in general, an increase of the pH in the TME, can per se revert the M2-like TAM phenotype into a more M1-like phenotype is sparse and relies on experimental proofs obtained over a wide range of pH/lactate changes 15,16. Our in vitro and in vivo data strongly support the idea that a mild deacidification of the TME sensitizes TAMs to leukocyte-derived signals such as IFNg, reducing the threshold of an M1-like phenotypic switch in response to this cytokine.

Consequently, the reduced immunosuppressive TME obtained targeting SLC4A4 led to a decrease in tumor growth and metastatic dissemination in different models of PDAC. Moreover, we have demonstrated that inhibition of SLC4A4 can sensitize PDAC to immune check-point inhibitors treatment leading to complete or partial regression of orthotopic KPC tumors and longer survival, further underlining the therapeutic potential of SLC4A4 blockade. 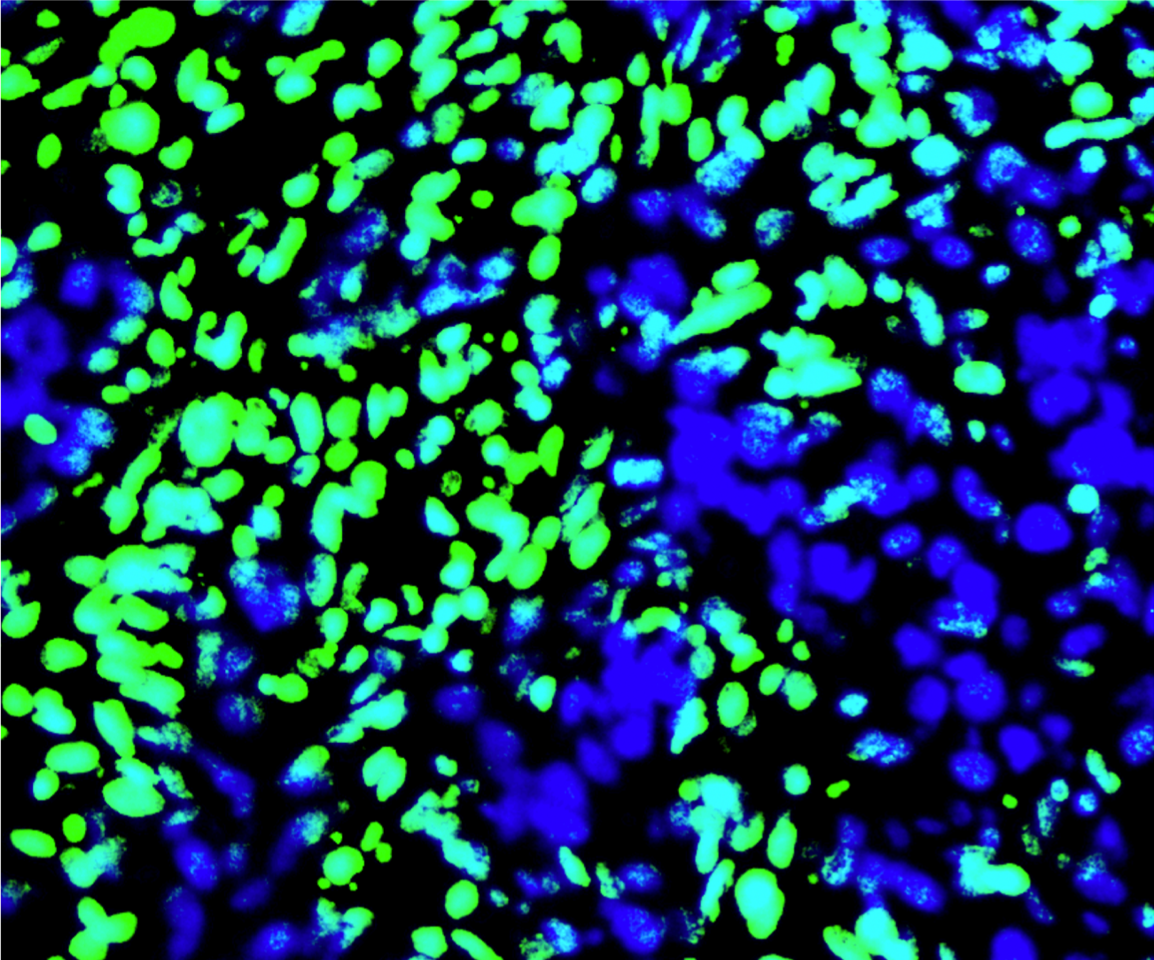