Relapse in acute myeloid leukemia (AML) occurs in about half of all treated patients despite intensive chemotherapy. We know that relapse is accompanied by increasing complexity in its genetic and epigenetic makeup, is notoriously chemoresistant and thus has a terrible prognosis. Next generation sequencing studies of serial patient samples has shed much light on genetic patterns from pre- to post-development of AML and through treatment, revealing substantial genetic evolution and selection of ‘fitter’ clones through chemotherapy treatment leading clinically to relapse.

What do our findings show?

We wanted to model the genetic heterogeneity of AML in a dynamic way to functionally identify genetic pathways that enable these ‘fitter’ clones to survive chemotherapy that could cause clinical chemoresistance in AML. We did this by performing a whole genome CRISPR knockout screen in AML cell lines, creating a population of cells with subpopulations representing individual gene knockouts of all protein-coding genes across the genome. We treated these cells with cytarabine and anthracycline chemotherapy (modelling standard chemotherapy used in AML patients) and saw outgrowth of resistant populations. The guide RNAs (and therefore gene knockouts) that were present in these chemoresistant clones clustered within 2 major pathways – 1. Cytarabine metabolism and 2. G1S cell cycle control with CDKN2A and CHEK2 being major hits within this latter pathway.

CDKN2A is the major regulator of G1 cell cycle arrest as well as apoptosis in response to DNA damage. Whilst CDKN2A is not frequently mutated in AML, we found reduced expression of CDKN2A was consistently associated with poorer overall survival in 3 publicly available expression datasets of normal karyotype AML (1-3). Furthermore, the downstream effector usually inhibited by CDKN2A, CDK6 was significantly upregulated at relapse in our analyses of paired diagnosis-relapse samples (4-6), further confirming the relevance of this pathway in human AML. CHEK2 is activated by DNA damage and also has direct roles in inducing cell cycle arrest and apoptosis. CHEK2 mutations are enriched in clonal haematopoiesis following cytotoxic therapy for non-blood cancers (7, 8), supporting a clinically relevant role of CHEK2 disruption in promoting survival of these clones to chemotherapy.

We knew that CDKN2A functions could be therapeutically targeted and wondered whether by combining modulators of this pathway with chemotherapy could improve the efficacy of chemotherapy against AML. We were in touch with a collaborator who had just published a novel KAT6A inhibitor, WM-1119, which could upregulate CDKN2A, inducing senescence and anti-tumour effects (9). We were also aware of selective CDK4/6 inhibitor Palbociclib, which was becoming a standard of care in breast cancer, but also demonstrating pre-clinical efficacy in AML. When we combined these agents with chemotherapy, we found significant cooperation in upregulating CDKN2A and promoting cell cycle arrest. With Palbociclib, we found that this cooperation was sufficient to induce a cell death response through apoptosis and the combination had improved anti-leukaemia effect in a mouse model of AML compared to chemotherapy alone.

We recognised that pushing the balance from cell cycle arrest to apoptosis would likely be necessary for successful combination therapies in an aggressive cancer like AML. At the time, the direct promotion of apoptosis using venetoclax combined with chemotherapy in AML was increasingly gaining traction in the clinical space and the subject of actively recruiting trials for upfront treatment (eg. Clinicaltrials.gov NCT03709758). We therefore asked whether adding venetoclax to chemotherapy was able to overcome chemoresistance mediated by impairment of cell cycle. Using cell line models with CDKN2A knockout, as well as the highly resistant populations generated through the original CRISPR screen harbouring knockouts of TP53 and/or CHEK2, we saw that venetoclax plus chemotherapy was synergistic and moreover, effective at restoring response to chemotherapy.

Why is this important?

Our work has revealed an important contribution of defective cell cycle regulation as mediating chemotherapy resistance in AML – both in the lab and in patients. We have also shown that rationally designed combinations of drugs with chemotherapy can mitigate the adverse effect of cell cycle deregulation (Figure 1). Thankfully, some drugs including venetoclax, are now more widely available and our findings support their greater use upfront, in combination with intensive chemotherapy. 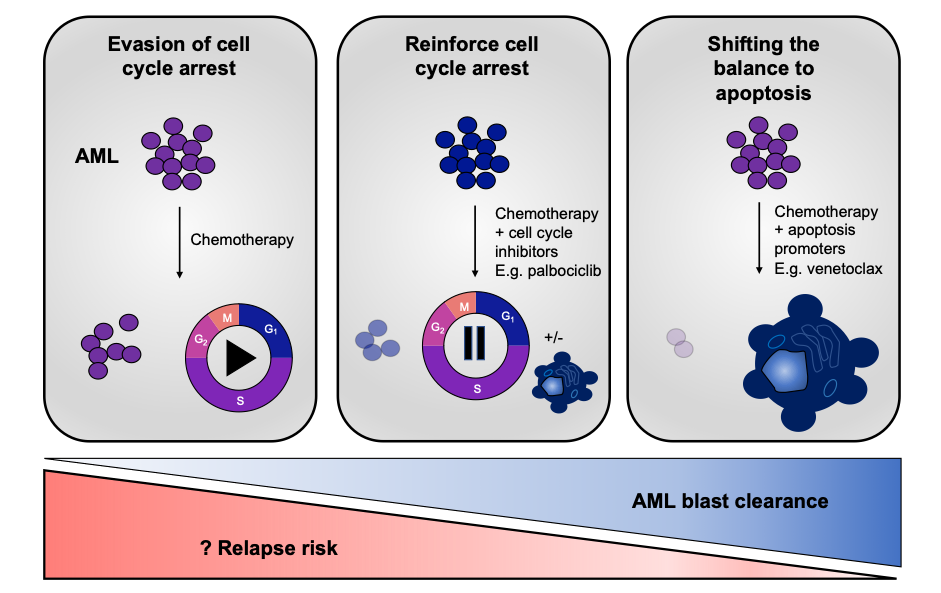