The presence of metastatic disease remains the worst prognostic factor in Ewing sarcoma (EwS), an aggressive pediatric bone and soft-tissue tumor. In our EwS study, we provide evidence for targeting YAP/TAZ as a promising strategy to prevent the onset of the metastatic cascade.
Lisa Bierbaumer
PhD Candidate, CCRI
Follow
Like Be the first to like this
0

The ability of cancer cells to detach from the primary tumor mass and to adopt an invasive and migratory phenotype is a prerequisite for metastasis. This switch is reminiscent of epithelial-to-mesenchymal transition (EMT), in which cells reduce proliferation and reshape their cytoskeleton to adopt mesenchymal characteristics such as reduced cell-to-cell interactions, increased migration and invasion. There is growing evidence that EMT-like changes are not restricted to epithelial cells but also occur in cancers of non-epithelial tissues including sarcomas.

One example thereof is EwS, for which a high degree of cellular plasticity was previously reported. EwS is driven by EWS-ETS fusion proteins, most commonly EWS-FLI1, which act as aberrant transcription factors. Two recent studies suggested that EWS-FLI1 oscillates between high and low expression states in vitro and in vivo, driving tumor cells to become either more proliferative (when EWS-FLI1 is high) or more migratory (when EWS-FLI1 is low) (1, 2). Although, in tumors, the frequency of cells with an EWS-FLI1-low gene expression program was estimated to be less than 1%, there is evidence that these cells undergo dynamic cytoskeletal rearrangements which promote metastasis.

Our lab has a long lasting interest in gene regulatory networks that are acting up- and downstream of EWS-FLI1. We previously described that high EWS-FLI1 suppressed the Rho/F-actin pathway via interfering with the MRTFB/YAP/TEAD signaling hub, thereby modulating the expression of genes involved in extracellular matrix binding and actin-cytoskeletal structure (3).

In our latest follow-up study, we investigated whether invasive cytoskeletal reprogramming in EWS-FLI1-low expressing EwS cells might be blocked by pharmacological inhibition of the YAP/TEAD or TAZ/TEAD transcriptional complex. To address this question, we used Verteporfin, a small molecule used in ophthalmology and a potent YAP/TAZ/TEAD complex inhibitor (Figure 1). In our study, Verteporfin affected cytoskeletal dynamics and reduced extracellular matrix interactions, and strongly inhibited EwS migration and invasion in vitro already at low concentrations. Importantly, in a mouse xenotransplantation model, it delayed lung metastasis without affecting tumor cell proliferation or cell viability. On the transcriptome level, Verteporfin reverted the gene expression program of EWS-FLI1-low into that of less invasive EWS-FLI1-high cells.

Our results support YAP/TAZ inhibition as a promising strategy in preventing the onset of the metastatic cascade in EwS. While Verteporfin serves a valuable tool for proof of concept, it may not be the ideal YAP/TAZ inhibitory molecule for systemic treatment due to its established photosensitizing activity and additional ill-defined YAP/TAZ/TEAD independent biological functions. However, our study strongly supports the development of novel YAP/TAZ/TEAD inhibitors for the treatment of metastatic solid tumors. 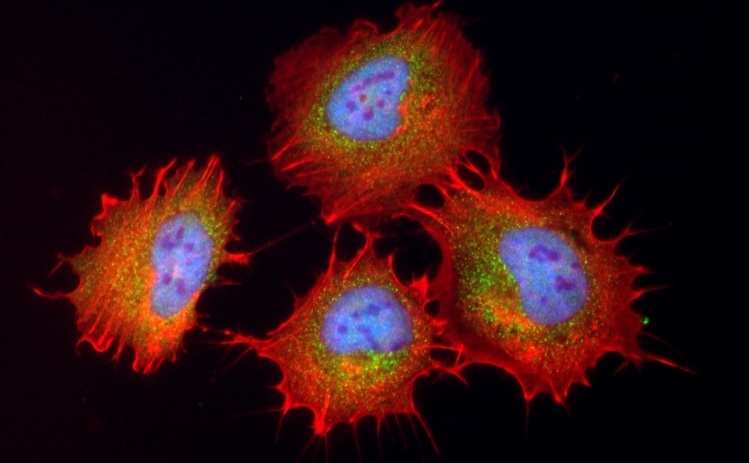 The presence of metastatic disease remains the worst prognostic factor in Ewing sarcoma (EwS), an aggressive pediatric bone and soft-tissue tumor. In our EwS study, we provide evidence for targeting YAP/TAZ as a promising strategy to prevent the onset of the metastatic cascade.