Small cell lung cancer carries a remarkably poor prognosis due to the rapid development of resistance to current therapies. Our recent publication summarizes our approach to identify molecular determinants of drug resistance and implicates the transcription factors ETV4 and ETV5 in this process.
David Shia
Medical Student, UCLA
Follow
Like Liked by Evelina Satkevic and 1 other
0

The development of drug resistance has remained a central problem in the treatment of small cell lung cancer. In a majority of cases, first line therapy with combination chemotherapy is able to achieve robust remissions, yet invariably chemoresistant relapse occurs within a year. Because of this, the 5-year overall survival rate for patients with this disease is only 6%1. Many studies have tried to identify mutations that might explain why SCLC becomes resistant so quickly. Unfortunately, these studies have not yet resulted in new therapies.

We sought to better understand the molecular changes that occur over time in SCLC cells in response to chemotherapy with the hopes of identifying targetable factors. In approaching this problem, we first evaluated how to best model this process in vitro. Previous studies in drug resistance had utilized a variety of different treatment schedules; however, consistently these studies focused on binary comparisons of experimentally derived resistant disease models against parental lines2,3. These studies did not consider the dynamic changes over time as selection occurred under chemotherapeutic pressure. Through our initial drug response studies, it became clear to us that the maximal cytotoxic response to chemotherapy was most frequently observed at one to two weeks following initial exposure. However, despite impressive 2-3 log fold reductions in cell viability, there was consistently a subpopulation of cells that survived and could aggressively expand. Such cells have been described in numerous other drug resistance studies and have been termed drug-tolerant persisters (DTPs). We were able to scale up these model systems which gave us a way to sample DTPs for molecular analysis. Gene expression profiling enabled by widely available massively parallel sequencing methods allowed us to interrogate discrete time points along the drug response time course.

Cellular diapause: a common survival program in times of stress?

Recently, a number of studies have provided evidence of DTPs adopting a diapause-like state under selective pressure, with common experimental models utilizing either chemotherapy or targeted therapies. Embryonic diapause gene signatures have been demonstrated in both in vitro DTP models and in vivo patient-derived xenograft mouse models of minimally residual disease across tumor types. Disease types analyzed thus far include breast cancer, colorectal cancer, acute lymphoblastic leukemia, melanoma, and prostate cancer4,5. We sought to further explore the generalizability of this embryonic diapause program extended to SCLC and found that the gene signature was maximized amongst DTPs at approximately one week following chemotherapy exposure. Whether this gene program is applicable to all DTPs across all cancers still remains to be seen, but current evidence certainly continues to support this idea. Furthermore, elucidation of underlying molecular pathways may begin to lay the groundwork for development of novel therapies that aim to prevent or target residual cancer cells able to adopt this diapause-like state for survival.

Perhaps the most surprising result came to us as we were evaluating the role of ETV4 and ETV5 in promoting clonogenic regrowth following chemotherapy. Our initial approach to this involved a CRISPR-mediated gene knockout strategy to generate complete knockout lines at either ETV4 or ETV5 individually, or both genes in combination. While we were successful in generation of these lines after extensive optimization, we were most surprised by our control lines. We generated multiple single cell clonal control lines and when we performed a clonogenic regrowth assay after chemotherapy exposure, we found significant variability in regrowth capability amongst the control lines, with some lines completely unable to regrow following treatment. While this proved to be an issue in validation of our genetic manipulation, it ultimately provides additional avenues of study into single cell variability and drug resistance. Furthermore, evidence of such phenotypic variability has important implications for studies utilizing CRISPR-mediated perturbations coupled with single cell cloning across cancer and stem cell biology.

Looking to the future

We view small cell lung cancer as an intriguing disease with unique opportunities. With such promising upfront responses to chemotherapy comes the potential for complete disease eradication. The major barrier to this is understanding the unique features of the surviving fraction of disease in patients. Our study puts forth a framework to characterize and better understand how DTPs respond to treatment over time and implicates the genes ETV4 and ETV5 in this process. We recognize that cellular plasticity may play an important role in drug resistance and that there likely exists numerous non-redundant resistance mechanisms that cancer cells are able to co-opt. Thus, we see a lot of promise in approaches that seek to implement sampling of patient disease over time while on treatment. SCLC may be particularly amenable to such methods given high circulating tumor cell burdens6. Such studies will allow for discovery of the most patient-relevant disease resistance mechanisms and provide for us the best chance in developing the next generation of cancer therapeutics. 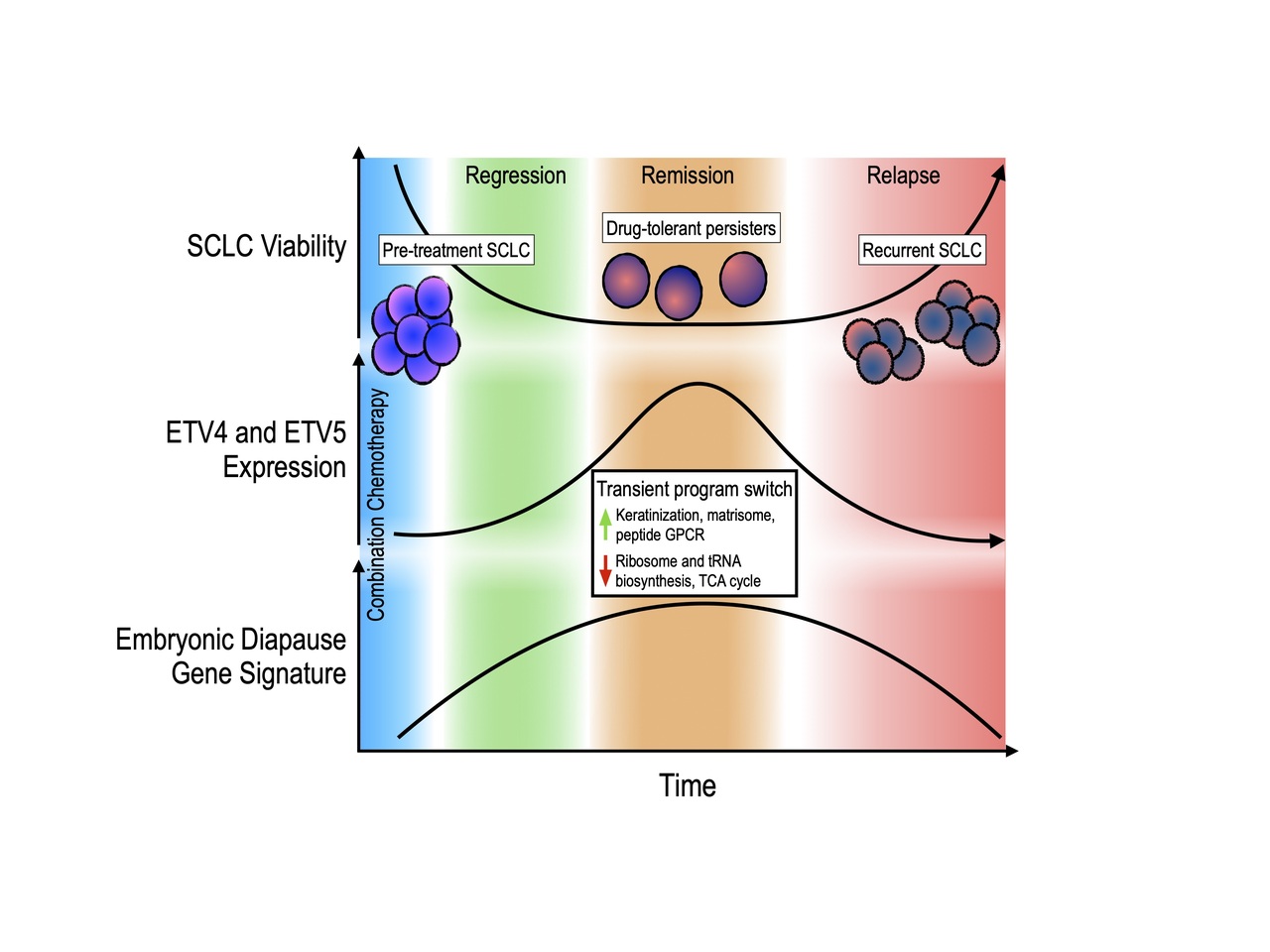 Small cell lung cancer carries a remarkably poor prognosis due to the rapid development of resistance to current therapies. Our recent publication summarizes our approach to identify molecular determinants of drug resistance and implicates the transcription factors ETV4 and ETV5 in this process.