During our study on ranitidine as part of the paclitaxel-premedication regimen, there was a worldwide recall of ranitidine. Fortunately, at that time all of our patients were treated without ranitidine. The recall made the conclusions of our study even more relevant!
Juul Cox
Hospital pharmacist, Maasstad Hospital
Follow
Like

Paclitaxel is one of the most commonly used anticancer drugs worldwide. To prevent HSRs, premedication regimens were introduced as standard of care during paclitaxel treatment and generally consists of the corticosteroid dexamethasone combined with a histamine 1 (H1)-receptor and the histamine 2 (H2)-receptor antagonist ranitidine. Although ranitidine is registered for the treatment of gastro-duodenal reflux and ulcer disease, it is also used for the prevention of allergic reactions during paclitaxel based chemotherapy. Strangely, the efficacy in preventing paclitaxel-associated HSRs has never been thoroughly studied and is therefore controversial. Therefore, we aimed to determine the added value of ranitidine in preventing clinically relevant HSRs by comparing the standard premedication regimen with ranitidine to an experimental premedication regimen without ranitidine.

Coincidentally, while conducting this study, a worldwide recall of ranitidine was issued. This event has made the conclusions of this study even more relevant as ranitidine was omitted from the premedication regimen during paclitaxel infusion and an alternative was not available. 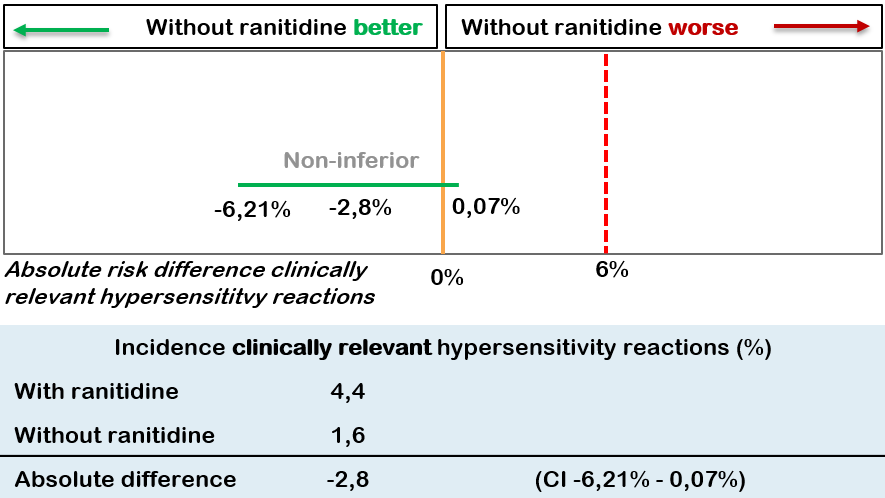 During our study on ranitidine as part of the paclitaxel-premedication regimen, there was a worldwide recall of ranitidine. Fortunately, at that time all of our patients were treated without ranitidine. The recall made the conclusions of our study even more relevant!