The BLIMP1—EZH2 nexus in a non-Hodgkin lymphoma - Oncogene

Oncogene - The BLIMP1—EZH2 nexus in a non-Hodgkin lymphoma

Waldenström’s macroglobulinemia (WM) is a type of non-Hodgkin lymphoma involving cells stuck somewhere between the B cell and plasma cell stages of differentiation. Although discoveries in the past decade have gone a long way towards advancing our understanding of the disease, there is still no cure. Thus, research into the molecular mechanisms of WM is valuable to inform future therapeutic studies.

The interplay of transcription factors and modifiers of the histone code drives many processes in normal biology and cancer. BLIMP1, a transcription factor, and EZH2, a histone methyltransferase, are important during the normal B cell to plasma cell transition [1-4], but their roles in WM have yet to be investigated. EZH2 is highly expressed in many cancers [5]. BLIMP1 on the other hand acts as a tumour suppressor in many B cell lymphomas [6-8], but is necessary for the survival of more differentiated multiple myeloma cells [9, 10]. Studies in mouse plasmablasts and antibody secreting cells have suggested both a physical and genetic interaction between the two factors [2, 3]. We wanted to see if this interplay was also present in WM cells, and if so, what effect was it having?

We used cell line models to show that BLIMP1 helps WM cells to survive by suppressing the cell death process of apoptosis. BLIMP1 mutes the transcriptional output of a number of important apoptosis genes. Surprisingly we also found for the first time that BLIMP1 maintains the expression of EZH2 on a protein level; decreasing BLIMP1 led to a decrease in EZH2. This was occurring through BLIMP1 inhibiting EZH2 degradation by the system known as the proteasome. We also saw a number of genes being repressed by BLIMP1 via its maintenance of EZH2, but did not see BLIMP1 and EZH2 binding to the same sites on chromatin. This means that the interaction between BLIMP1 and EZH2 in these cells may be more complicated than previously thought.

Evasion of the immune system is one of the hallmarks of cancer [11]. Natural killer (NK) cells function on the front line of defence against tumour cells. Fortunately, experts on NK cell interactions, Kirstine Nolling Jensen and Ingibjörg Hardardóttir were working close by in the immunology department at the National University Hospital of Iceland. With their help, we found that BLIMP1 helps the WM tumour cells to hide from NK cells and thus avoid being killed. Furthermore, we found both BLIMP1 and EZH2 preventing the WM cells from responding to the cell death signals they received from NK cells. They do this by regulating the expression of immune signalling genes. Thus, BLIMP1 and EZH2 both drive immune evasion in a WM cell line model.

Cancer cells can often highjack transcription factors controlling normal cellular processes to give themselves better chances at survival. Our study provides evidence of the BLIMP1-EZH2 nexus promoting survival and immune escape in a non-Hodgkin lymphoma. 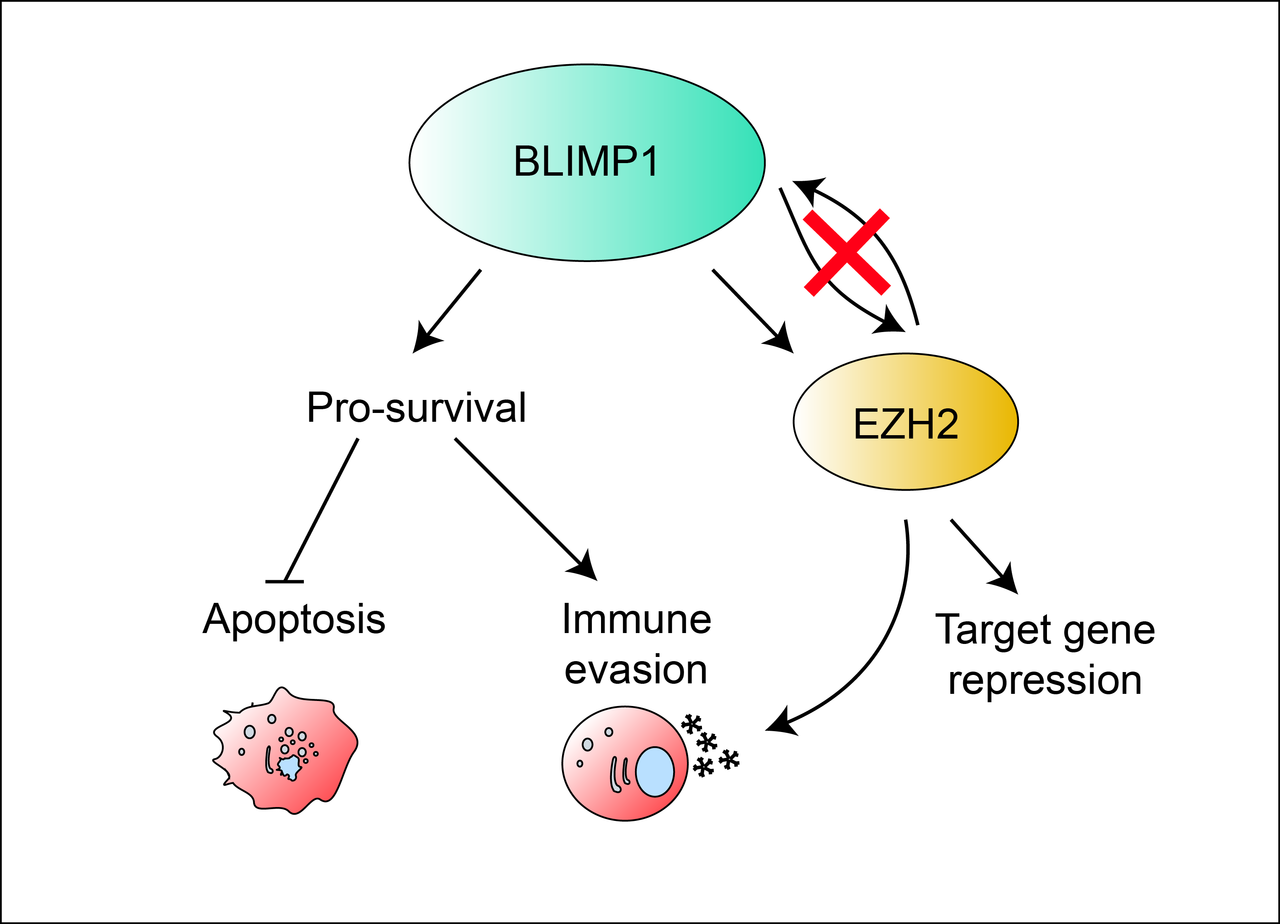