Our recent finding that prostaglandin D2 is involved in the progression of colorectal cancer (CRC) is based on that its receptor DP2 expression is increased and goes with poor prognosis for these CRC patients and promotes colon cancer cell migration via the upregulation of pERK1/2 and VEGF levels. 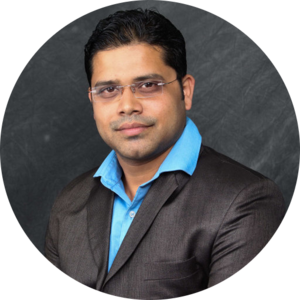 Colorectal cancer is one of the most common cancers worldwide and is associated with chronic inflammatory bowel diseases. Regardless of deep research, the prognosis for patients with advanced colorectal cancer (CRC) remains poor. The prostaglandin D2 receptors DP1 and DP2 are explored here as potential therapeutic targets for advanced CRC. Prostaglandins (PGs), which are produced via the cyclooxygenase 2 (COX-2) pathway, play a crucial role in generating the inflammatory response, and their production is significantly induced under inflammatory conditions. In addition to PGE2, PGD2 is another important eicosanoid involved in inflammatory processes and plays a role in tumour pathogenesis in different cancers (Wang and DuBois, 2010; Trabanelli et al., 2017). The multifaceted biological functions of PGD2 as both a proinflammatory and an anti-inflammatory mediator remain controversial. PGD2 exerts its biological functions through its two G protein-coupled receptors, D-type prostanoid receptors 1 (DP1) and 2 (DP2). The importance of DP2 as a novel therapeutic target in asthma has been described in multiple studies (Domingo et al., 2018). More importantly, in a DSS colitis mouse model study, blockade of DP2 resulted in reduced inflammation, suggesting that DP2 is a good drug target for inflammatory bowel disease treatment (Sturm et al., 2014). To unequivocally decipher the role of DP2 in colon cancer pathophysiology, we studied its role in colorectal cancer (CRC) patients and its role in tumorigenesis using both in vitro and in vivo models. 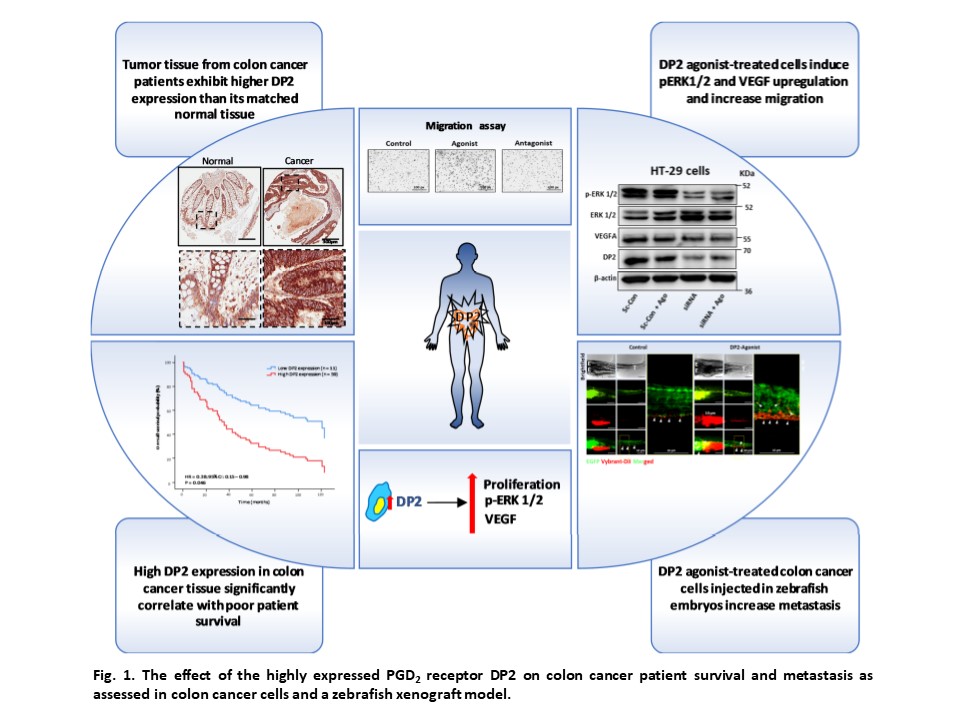 To understand the underlying mechanism of the DP2-induced effect on CC cells, we carried out western blot analysis in DP2-stimulated cells. DP2 agonist treatment significantly increased the phosphorylation of ERK1/2 (pERK1/2), vascular endothelial growth factor (VEGF) and DP2 levels in colon cancer cells (HT-29). Interestingly, we also observed induction of the expression of HIF-1α, a well-known regulator of VEGF, after DP2 agonist stimulation, and this effect were abolished with DP2 antagonist treatment. This result was further supported by ELISA analysis, in which treatment with the DP2 agonist significantly increased VEGF release into the conditioned media. Knockdown of the DP2 gene significantly decreased the pERK1/2 level and both the transcript and protein levels of VEGF in colon cancer cells (Fig. 1).

We next used a transgenic zebrafish xenograft model to study the possible role of DP2 in promoting metastasis. We observed a significant increase in metastatic burden in zebrafish embryos injected with DP2 agonist-treated human colon cancer cells, but almost no trace of metastasis was observed in the DP2 antagonist-treated group. Moreover, DP2 knockout cells also showed a significantly reduced metastatic burden with or without agonist stimulation (Fig. 1).

In conclusion, our results showed that high expression of the PGD2 receptor DP2 correlates with poor survival in colon cancer patients and promotes colon cancer cell proliferation and migration via the upregulation of pERK1/2 and VEGF levels. Considering the demand for novel targeted therapies, our report suggests an additional use of DP2 antagonists that have already been approved for asthma treatment as new combination therapies for the treatment of colon cancer patients.