Ras activation is a crucial driver of cancer pathogenesis but efforts to target it have largely failed. Activation is mediated by formation of the Grb2-Sos complex. We find that Grb2 isoform Grb3-3 diminishes Ras activation due to competition for Sos binding, and is reduced in tumour tissue.
Amy Stainthorp
Research Fellow, University of Leeds
Follow
Like Liked by Evelina Satkevic and 3 others
0

The Grb2 splice variant Grb3-3 results in decreased activation of the Ras-MAPK pathway due competition with Grb2 for SOS binding, with reduced Grb3-3 levels observed in tumour tissue suggestive of a mechanism for enhancing Ras pathway activity.

The Ras/Raf/Mek/extracellular signal-related kinase (Erk) cascade is one of the best characterised of the mitogen-activated protein kinase (MAPK) pathways and is highly implicated in cancer.1 Activation of this pathway (hereafter referred to as the MAPK pathway) induces multiple cancer hallmarks, including cell proliferation, migration and drug resistance. Consequently, in normal cells, this pathway must be tightly regulated.

MAPK pathway activation classically follows growth factor-induced stimulation of a membrane-bound receptor tyrosine kinase (RTK).2,3 The active RTK recruits the adaptor protein Grb2 and the guanidine nucleotide exchange factor Sos.4,5 Once localised to the cell membrane, Sos mediates activation of membrane-anchored Ras. Active Ras then acts as a switch to turn on the MAPK pathway, in which a series of protein kinases are sequentially activated by each other. MAPK activation culminates in gene transcription and thus a change in cell behaviour (Figure 1).

Ras activation is a key step in the MAPK pathway

As may be expected, components of the MAPK pathway are frequently mutated in cancer, leading to constitutive activation of MAPK signalling. RTKs may be overexpressed, mutated or production of their stimulatory ligands may be increased. Alternatively, in many cancers, Ras harbours activating point mutations.6 Ras mutations are particularly common due to the convergence of many pathways at this step, highlighting the importance of Ras activation by the Grb2-Sos complex.

Ras has proved elusive in the quest to develop drugs targeting this protein, with only one (sotorasib) recently approved for clinical use.6,7 Efforts to inhibit Grb2 have been similarly ineffective.8 Additionally, therapies which target upstream RTKs often face problems with resistance and can only be used in the cancers in which they are dysregulated.9-11

Grb2 has an isoform called Grb3-3

Alternative splicing, in which protein-coding exons are excluded from the final messenger RNA transcript, generates different protein isoforms. The Grb2 isoform, Grb3-3, has a deletion of 40 residues in its SH2 domain.12 SH2 domains bind phosphorylated tyrosine residues such as those presented on active kinases. Thus, the SH2 domain of Grb2 associates it with active RTKs and is vital for downstream activation of the MAPK pathway. However, the two SH3 domains of Grb2, which bind to Sos, are unchanged in Grb3-3.

Changes in protein structure mean that different protein isoforms may have different functions. Little is currently known about the role of Grb3-3, but it has been reported to modulate EGF-dependent Ras activation.12

What we found out:

Initially, we wanted to know how Grb3-3 affects MAPK signalling. The last kinase in the MAPK pathway is Erk and therefore we used Erk phosphorylation as a measure of overall MAPK pathway activation. Using a variety of cell-based studies, we found that Grb3-3 diminished Erk phosphorylation downstream of multiple different receptors. In line with this, Grb3-3 also reduced cell proliferation.

We next studied the interaction of Sos with both Grb2 and Grb3-3 in mammalian cells and in biophysical assays. Grb3-3 was associated with Sos both in growth factor-stimulated cells and in absence of stimulation. However, Grb2 mainly binds Sos under stimulatory conditions, as it is in its monomeric form which is capable of binding Sos.13,14 We found that the affinity of both Grb2 and Grb3-3 for Sos was similar. Therefore, in absence of growth factor, Grb3-3 competes with Grb2 for binding Sos. However, upon cell stimulation, the population of Grb2 which can bind Sos increases and the majority of Sos is associated with Grb2.

In stimulated cells, Grb2 is associated with the active RTK by its SH2 domain. It therefore recruits Sos to the cell membrane. As the Grb3-3 SH2 domain is unable to bind the receptor it remains localised to the cell cytoplasm. We found that when mammalian cells expressed high levels of Grb3-3, localisation of Sos to the cytoplasm was enhanced and less was recruited to the membrane. Therefore, Grb3-3 acts to prevent the formation of the Ras-activating RTK-Grb2-Sos complex.

Having identified that the relative concentrations of Grb2 and Grb3-3 dictates which binds Sos, we next sought to understand the mechanism which controls this. Exclusion of exon 4 from Grb2 messenger RNA (mRNA) results in the loss of 40 residues in the SH2 domain seen in Grb3-3. Using a combined in silico and in vitro approach we identified heterogenous nuclear ribonucleoproteins C1/C2 (hnRNPC) as the splice factor responsible for this event. hnRNPC bound Grb2 mRNA at the site of alternative splicing and was associated with exon 4 skipping.

To understand if Grb3-3 is implicated in cancer, we quantified its expression in tumour samples and normal tissue taken from colon cancer patients. All tumours expressed wild type Ras and Raf. When measured as a proportion of total Grb2 (Grb2 and Grb3-3), Grb3-3 was diminished in the majority tumours. Expression of hnRNPC was similarly reduced in most tumour cases. Consequently, we propose a model (Figure 2) whereby hnRNPC is expressed at high levels in non-malignant tissue and suppresses inclusion of exon 4 in the Grb2 transcript. Grb3-3 binds Sos and sequesters it in the cytoplasm, away from Ras. Consequently, the MAPK pathway is repressed, preventing the induction of proliferation. In cancer cells, low hnRNPC expression permits the inclusion of exon 4, both repressing the expression of Grb3-3 and enhancing Grb2. Grb2 outcompetes Grb3-3 for binding to Sos, thus facilitating the activation of Ras-MAPK signalling.

Current cancer therapies are limited by the frequent occurrence of drug resistance. The critical role of both Ras and Grb2 in MAPK pathway activation in many types of cancer makes it a tempting target for future therapies, but exhaustive pharmacological efforts to inhibit it have largely failed. Novel approaches to target MAPK signalling are required, as is a better knowledge of the mechanisms regulating this pathway. Our work indicates a need to fully elucidate the role of Grb3-3 in controlling Ras activation in cancer. 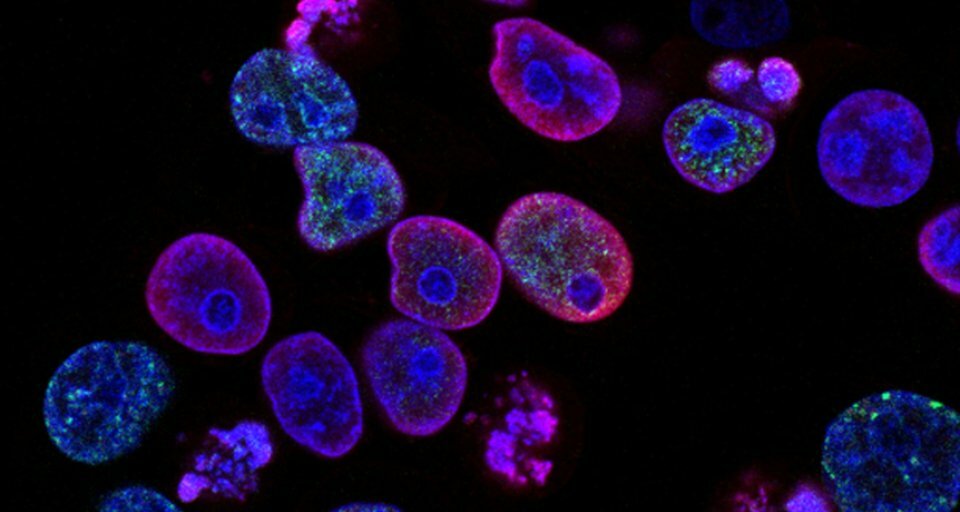 Ras activation is a crucial driver of cancer pathogenesis but efforts to target it have largely failed. Activation is mediated by formation of the Grb2-Sos complex. We find that Grb2 isoform Grb3-3 diminishes Ras activation due to competition for Sos binding, and is reduced in tumour tissue.