The power of iPSC extracellular vesicles in boosting hematopoiesis

Paracrine activity of human iPSCs mediated by iPSC- derived extracellular vesicles (EVs) may be employed to enhance functional and pro-regenerative capacity of HSPCs from umbilical cord blood and potentially increase successful applications of such clinical material in adult patients.

The paracrine capacity of extracellular vesicles (EVs) secreted by different types of stem cells (SCs) is one of the topics that has been explored in our laboratory for last years. Since several recent worldwide studies have demonstrated that EVs may carry bioactive molecular cargo and transfer it to various recipient cells, the functional effects of SC-derived EV activity occurred to be in a spotlight of researchers and clinicians working in the field of basic biology as well as tissue regeneration.

Among several types of SCs extensively explored in our laboratory as donor cells for EVs, we have recently focused on human induced pluripotent SCs (hiPSCs) considering not only their pluripotent potential, but their underappreciated secretory activity, which opens wide possibilities for the use of their EVs (hiPSC-EVs) as safe and effective alternative for cell-based therapies. Our journey with iPSC-EVs has started from demonstrating their functional pro-regenerative effects in cardiac tissue. Our both in vitro and in vivo results already published in Stem Cells (1) and Circulation Research (2) journals, have shown improved cardiac tissue regeneration following iPSC-EV administration, which have encouraged us to test whether hiPSC-EVs may also boost biological potential of other, more primitive progenitor cell populations.

Therefore, in our recent study published in Leukemia (3), we focused on an impact of iPSC-EVs on hematopoietic stem and progenitor cells (HSPCs) isolated from umbilical cord blood (CB-HSPCs), which is a well-known, but still underutilized clinical material, mainly applicable in clinical hematology. Clinical application of CB cells has been considered as a desirable alternative for bone marrow transplantation, due to their enrichment in HSPCs, convenient method of collection, low immunogenicity and low risk of graft- versus- host disease following CB cells administration. However, as hematopoietic recovery may be delayed by limited number of HSPCs present in a single CB unit, successful use of CB-HSPCs in adult patients requires the development of effective strategies that would improve biological activity of these cells.

Considering that the role of hiPSC-EVs as potential modulators of hematopoietic properties of CB-HSPCs has never been evaluated before, we believed it was an interesting new approach in our studies, potentially helping to develop new strategy of ex vivo “priming” of CB-HSPCs to boost their efficacy prior to transplantation. Therefore, we have performed several in vitro and in vivo assays to test whether hiPSC-EVs may enhance functional properties of CB-HSPCs critical for their hematopoietic potential, and indeed we demonstrated that hiPSC-EVs enhanced i) metabolic activity, ii) survival, as well as iii) hematopoietic and clonogenic potential of such progenitors in vitro. Additionally, iv) chemotactic response of CB-HSPCs to stromal cell-derived factor 1 (SDF-1) and v) their adhesion to the model components of hematopoietic niche were also increased following hiPSC-EVs treatment. Importantly, we have also demonstrated that vi) hiPSC-EVs improved CB-HSPCs engraftment and hematopoietic reconstitution in vivo. Lastly, we postulated possible molecular mechanisms of hiPSC-EVs impact on CB-HSPCs, indicating changes in expression of several gene and activity of various  proteins involved in hematopoiesis-related signalling pathways.

These findings support the concept envisioning hiPSC-EVs as “carriers” of bioactive molecules including proteins and regulatory small RNAs, that may modulate functional properties of target cells, which opens new possibilities for use of paracrine potential of hiPSCs to enhance functional and pro-regenerative capability of other cell populations. Importantly, we envision our results to also provide possible significant impact on future clinical practice, facilitating the development of new safe approaches to improve hematopoietic potential of CB- derived HSPCs prior to their transplantation and increase successful application of umbilical cord blood as clinical material suitable for the treatment of adult patients requiring hematopoietic reconstitution. 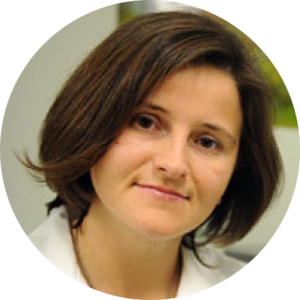 Ewa Zuba-Surma, PhD, DSC, Associate Professor at the Departmet of Cell Biology, Faculty of Biochemistry, Biophysics and Biotechnology at the Jagiellonian University in Krakow, Poland.

My research interest is mostly related to applications of selected stem cell populations and their derivatives (extracellular vesicles, EVs) in tissue regeneration. I am also interested in development of clinical applications of SCs and EVs, focusing on GMP standards and conducting clinical trials.