How the bone marrow microenvironment evolves during induction chemotherapy to facilitate acute lymphoblastic leukaemia (ALL) survival remains unclear. Here the authors show that adipocytes emergent during ALL therapy aid the survival of ALL cells through a restrictive effect on the ALL proteome.

One of the most appealing features of this manuscript for me as a junior clinical researcher is it’s span across the translational research cycle from the bedside to the bench and back toward the clinic.

The premise of the work comes from the simple yet elegantly described clinical observation of the changing adipocyte bone marrow landscape in serial biopsies from ALL diagnosis, through treatment to remission. Histopathology remains a crucial pillar of modern medicine and while exciting hypotheses may be generated with sophisticated molecular techniques, this manuscript reminds us that a wealth of information on which to base new endeavours can be accessed (comparatively) simply using not much more than patient biopsies and a microscope.

In this case, the observed evolution in adipocyte phenotype was important as there was a clear temporal relation to the well-known evolving phenotype of B-ALL: highly proliferative at diagnosis with an initial sensitivity to chemotherapy that is then blighted (especially in adults) by a quiescent, relapse generating pool of cancer cells, known in the clinic as MRD (measurable residual disease). Using this as a starting point to investigate a potential causal relationship between the adipocyte/lymphoblast interaction and chemotherapy resistant MRD uncovered some exciting findings which have immediate relevance to an understanding of how B-ALL, apparently in remission, frequently re-emerges during the gruelling chemotherapy regime that patients endure. Sanctuary sites are an accepted phenomena in cancer medicine and while typically described as areas with inadequate chemotherapy penetration, this study identifies the post-remission bone marrow itself, with its regenerating adipocyte population, as a functional sanctuary site, harbouring quiescent lymphoblasts under the protection of their adipocyte hosts.

Of course, the ultimate goal of translational research is to take something back from the bench to the clinic and new understandings of disease processes, as uncovered in this work, are the first step on the convoluted maze-like path towards the holy grail of an effective treatment to stop cancer from killing people. In this case, the first crucial translatable observation is that the drug resistance driven by adipocytes is reversible upon microenvironmental withdrawal, suggesting that an adipocyte targeting intervention may re-sensitise MRD to treatment. Next, born from the observation of reduced protein translation in adipocyte conditioned B-ALL, the investigation of the role of the targetable molecule GCN2 turned up some intriguing results, although not the final demonstration of how this adipocyte effect could be reversed in the clinic.

As concluded in the discussion section, the data generated has opened a potentially profitable avenue in the quest to cure B-ALL and elaboration of the role of adipocytes in remission and relapse has been rendered a top priority.

A view from the bench; by Foteini Kalampalika, PhD student @ Barts Cancer Institute

As a new PhD student, I am taking the first steps towards a deeper understanding of ALL and the tremendous impact of its microenvironment on disease progression and chemotherapy resistance.

ALL is a type of blood cancer that still puzzles scientists around the globe. Despite the majority of paediatric cases (>80%) being curable, the adult form of this disease is commonly associated with relapse and has a higher mortality, with about half of the affected population succumbing to the disease. The ALL microenvironment is known to have a key role in the disease’s survival and acquisition of chemoresistance, but the exact interactions and players responsible are still not fully explored. This article elucidates the role of the adipocytes in the cellular quiescence and the longevity of the leukemic cells.

Personally, I was fascinated by the experiments described in this issue of Nat. Commun, who’s goal was to dissect the impact of the adipocyte/leukaemia interactome. In this manuscript Heydt and colleagues investigate the role of the microenvironment in ALL development and show that adipocytes, an unsuspected player of the bone marrow niche, can have a much more critical role in the disease’s persistence than we imagined.

After the initial chemotherapeutic treatment of ALL, adipocytes re-populate the remission bone marrow and they have been linked with the acquisition of resistance to treatment. This work describes for the first time how the adipocytes selectively restrict protein biosynthesis in leukaemia and how this inhibition regulates ALL quiescence. Additionally, it emphasises the importance of this process in the generation of treatment resistance. Understanding the importance of the crosstalk between ALL and adipocytes will potentially generate new therapeutic targets for the avoidance of chemoresistance and potentially a cure for ALL. Specifically, the abrogation of crosstalk between leukemic cells and adipocyte stromal microenvironment now appears to be a critical target for these potential novel therapeutic approaches. More specifically, the recruitment of protein biosynthesis agonists or the disruption of the juxtaposition of ALL and adipocytes, could provide two cogent strategies in the prevention of the deleterious effects of the aforementioned interaction.

To sum up, the understanding of the molecular pathways leading to resistance in ALL is an important facet in developing new therapeutic approaches in order to change the all too frequently predisposing fate of patients to relapse. Thus, this paper gives a new perspective on therapy and can play a significant role in paving the way toward novel targets and the generation of alternative treatments.

Link to the paper: Adipocytes disrupt the translational programme of acute lymphoblastic leukaemia to favour tumour survival and persistence 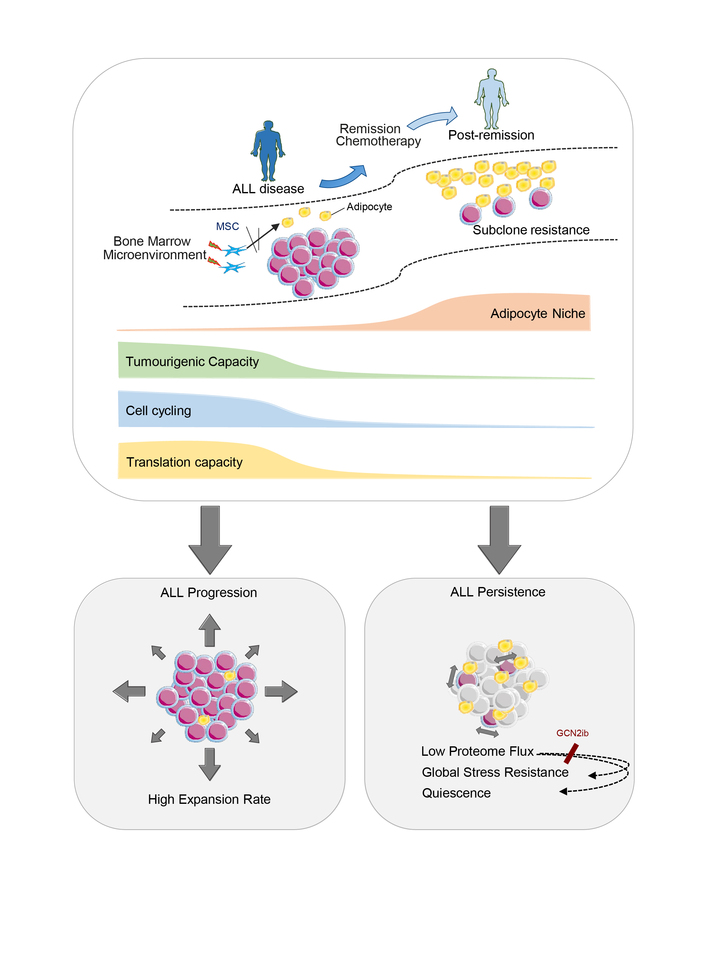